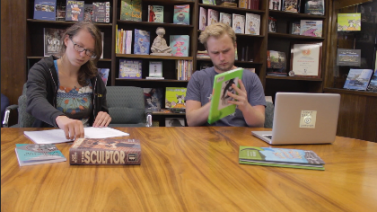 Interns Emily Schanowski and Noble Rundman as they appear in the Worzalla video series in their roles as marketing interns trying to grasp the print production process.

The videos were created by two University of Wisconsin-Stevens Point students who were completing a marketing internship with the company.

“These brief, entertaining episodes are tools for our publishing customers who would like to expose their production staff to the printing end of the publishing experience to help them better understand how to design and prepare files for print,” states Rich Letchinger, VP, sales and marketing at Worzalla.

“We wanted to produce the videos from the point of view of someone who is not at all familiar with the print industry,” stated Letchinger. “The result is a tongue-in-cheek look at common activities at our company and how these core elements of print production are perceived by someone who is suddenly thrust into the Worzalla environment. Each video provides a spoonful of print knowledge that book designers and production assistants may find handy as they prepare their files for the book manufacturing process.”

Noble Rundman and Emily Schanowski are the summer interns featured in the video series along with Worzalla associates who impart the print knowledge. Rundman and Schanowski had full creative control from concept to completed video. The two created six videos – the first welcomes the viewer to Worzalla and the Central Wisconsin area, the other five delve into the production process from pre-press through binding, color management and environmental initiatives.

“Our process included shooting the initial footage, interviewing key associates on and off camera, recording our own voice narration, and putting all of those pieces together to tell the clearest possible story,” stated Schanowski. “There is still a near infinite amount of things to learn about the printing world; we’ve barely scratched the surface this summer. Our internship went too fast, but we learned so much and had a great experience,” Schanowski commented. “It was particularly great to plan the whole project, and each video, from start to finish. Seeing each video debut online has been a very rewarding experience.”

Envision Adds Equipment for Use by Vision Impaired