one-two punch. noun. A combination of two blows delivered in rapid succession in boxing, especially a left lead followed by a right cross. Informal: an especially forceful or effective combination or sequence of two things... 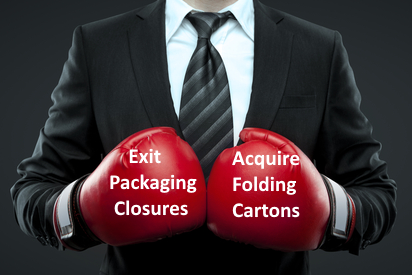 WestRock, the entity created by the merger of RockTenn and MeadWestvaco, enters the new year with a loud and clear affirmation of the company's commitment to paper-based packaging. In a one-two punch, the company exited the plastic closures and dispensers and landed a solid strategic blow to competitors in the folding carton segment. The company shed its $556 million Home, Health and Beauty business unit in a sale to Silgan Holdings. The divested unit engineers and manufactures triggers, pumps, sprayers and dispensing closure units. Silgan, the acquiring company, manufactures rigid metal and plastic containers as well as the closures and lids. The very next day WestRock acquired Multi Packaging Solutions, the $1.6 billion roll-up of folding carton and high-end packaging companies.

Wait a minute — did we just say a multiple of 9.6x on TTM? How does what is essentially a printing company achieve an exit multiple approaching double digits when many printers are offered (and accepting) a purchase price of 4.0 times trailing adjusted EBITDA. The key driver of the price paid was very likely the strategic fit that MPS represented for WestRock; simply put there are not many billion-dollar-plus companies in the folding carton segment available for acquisition. When the buyer is as big as WestRock ($14+ billion), it takes a sizable acquisition to move the needle; WestRock was clearly a highly-motivated buyer that was seeking to continue its growth through acquisition. The seller, MPS, was itself a very active acquirer, having recently completed two acquisitions (see The Target Report - November 2016), maintaining its own steady strategic course while showing a very respectable adjusted EBITDA of 14.8%. On the buyer's side, WestRock enjoys the higher multiple that being a public company endows on successful companies, affording access to capital and the ability to pay more for acquisitions. Commenting on the high multiple it paid, WestRock reported that it expects synergies, savings and improvements that will lower the effective multiple to 7.1 times, but of course that's speculative and accrues to the buyer only if achieved, while the seller knows they exited at a cool 9.6x multiple.

Commercial Printing — Diversified Services
Pat Patterson, CEO of direct mail and specialty envelope printer Colortree Group, acquired the company he has managed under the ownership of Boathouse Capital since it acquired his company Graphic Innovations in 2011, merging it at that time with another printing company to form the Colortree Group. Boathouse bolted-on a third printing company, Direct Impressions, in 2013, creating the current configuration (see The Target Report - January 2013).

In another successful exit from the printing industry for private equity, Bradford Equities sold Independent Printing of DePere, Wisconsin to trade-only printing company Ennis. The Texas-based Ennis sells exclusively through its distributor network and has executed a disciplined acquisition strategy of adding companies that print products in defined product categories such as bank checks or business forms. With 55 locations across 20 states, Ennis, which reported $544 million revenue, has appeared nine times in our deal logs over the past five and half years. In every transaction, Ennis has executed on its product-focused strategy by acquiring specialty printers: forms (five times), presentation folders, envelopes, tags, labels and promotional products. Independent fits right into the Ennis strategy with defined product offerings including forms, folders and presentation products.

OneTouchPoint, arguably the most viable candidate on the horizon to become the new national roll-up company in today's commercial printing industry, announced the acquisition of Colorado-based FuseCreates, a commercial printing company that brings additional services, such as mailing, fulfillment, creative and data management to the existing operation in Denver. OneTouchPoint was acquired by private equity firm ICV Partners in 2014 with prior backing from Huron Capital Partners (see The Roll-Up Returns (to Commercial Printing), The Target Report, Sept 2014). The company appears to be accelerating its acquisition activity, having just acquired Cincinnati-based Print Management in November 2016.

Bankruptcies and plant closures spiked up a bit in January, with two Ch. 7 liquidations, four Ch. 11 filings, and five non-bankruptcy closures. None of the bankruptcies filed were by major players and thus the spike may just be a clearing out of some weaker companies as the new year unfolds. One plant closure, however, struck a personal chord; the announcement that Cenveo was closing its Portland plant, formerly The Graphic Arts Center, a super-high-end printer known nationally for printing beautiful annual reports, automotive brochures and fashion catalogs. During the decade before the company was acquired by Cenveo's predecessor company Mail-Well, I was working for a fine commercial printing company as a sales rep, later as VP of sales and finally as a company owner. On the rare occasion that we were up against The Graphic Arts Center, we knew that in that instance we were not competing on price; we were, at least for the moment, playing in the printing big leagues. They were that good. 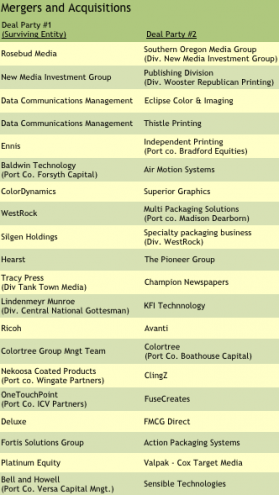 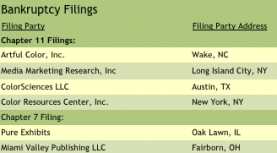 Click here for The Target Report January 2017 for the complete deal logs above but with additional information and links to sources.