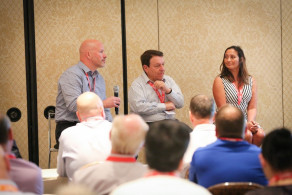 Granted, it’s a bit unfair to compare commercial printing’s most important U.S. trade show to what’s rapidly become the world’s largest inkjet user conference. But they do illustrate an industry shift that’s been occurring the past several years: the shrinkage of Graph Expo vs. the growing prominence and strong printer participation at user group conferences like HP’s Dscoop, EFI’s Connect and, now, Canon’s thINK.

Yes, there was a range of equipment on display at Graph Expo 16 that you couldn’t find at any user group event. And the majority of Graph Expo exhibitors I spoke with seemed satisfied with the leads they generated, albeit largely from those Southeastern U.S. and Latin American printers who typically wouldn’t trek to Chicago. By the same token, few Midwestern printers — who are used to driving to Chicago’s McCormick Place — hopped on planes to attend the show in Orlando.

That’s because Graph Expo largely draws a regional audience in relation to the geographic proximity where the exhibition is held. However, printers nationwide will travel to user group events to take part in highly focused educational tracks and to network with like-minded industry peers grappling with the same business and technology issues.

Don’t get me wrong. Graph Expo still serves its role as a key industry event where attendees can network and meet with, and compare offerings from, multiple vendors in a single location. A market convergence is taking place, however. As commercial printers, and their main suppliers, branch out into wide-format, package and label printing, trade shows like SGIA, ISA, Pack Expo and Labelexpo now compete for many of the same exhibitors [dollars] and audiences. The consolidation, or even the co-location, of some of these shows would benefit the printing industry overall, but protectionism, politics and revenue split issues among competing organizers make it unlikely, at least for now.

In the meantime, the broad-based industry trade shows will continue to shrink, while those targeting specific growth markets will hold their own. But user group conferences are the events that will really flourish.