The Urge to Merge Is Still Strong

If you own a printing business, you should be in either a selling or a buying frame of mind - even if you have no present intention of doing either. These days, understanding M&A basics is smart thinking for every owner.

"Rarely does a day go by, it seems,” wrote Printing Impressions Editor-in-Chief Mark Michelson in a recent commentary, “that I don’t hear of at least one printing industry M&A transaction.” There’s a reason why they keep popping up on his radar.

Mergers and acquisitions may not be the heartbeat of the industry, but they supply a lot of its nervous energy - the dynamic churning that reinvents growing companies, sunsets those at the ends of their life cycles and helps the industry adapt as it must to the omnichannel environment that every printing company is learning how to do business in.

No one follows the state of printing industry M&As more closely than the consultancies Graphic Arts Advisors (GAA) and New Direction Partners (NDP), both of which have been instrumental in noteworthy recent deals. Their principals see sustained vigor in the market for M&A transactions.

The pace of M&A activity among printing and packaging companies was “steady and diverse” last year and seems likely to remain that way in 2018, according to Mark Hahn, GAA’s managing director. He notes that M&A transactions are also taking place in other parts of the print supply chain, including the paper and equipment sectors. 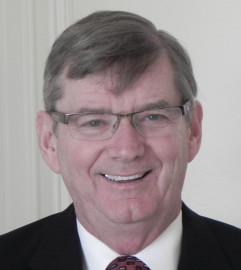 NDP’s Paul Reilly says an M&A market that remains “relatively brisk” has given his firm a full backlog of deals to work on as it begins the new year. His co-founding partner, Peter Schaefer, observes that the market is still tilted in favor of sellers, although prospective acquirers have advantages, as well.

Keeping the consultancies busy is the ongoing consolidation of the industry. As its base shrinks and as the nature of the demand for print continues to change, the companies that have survived need new ways of adapting. Because organic growth in a constricted market is harder to achieve, growth by acquisition gets greater attention as a strategic alternative.

Then, says Hahn, there’s the “pure and simple” fact of what happens when the principals of family-run businesses enter their senior years. For third- and fourth-generation owners who have “weathered the storm” and have no further wish to stay involved, selling is the logical exit. There are many such owners in the industry, and they’re the reason why Hahn believes that for the next 10 years, his business will be driven “largely by demographics.”

All M&As are time-sensitive, and NDP urges its clients to keep their eyes on the big clock ticking for the economy as a whole. As Schaefer puts it with tongue only partly in cheek, “Sell your business one year before the next recession — if it’s not already too late.” Some economists, he explains, think we’re overdue for a correction. The second year after a presidential election is thought to be a particularly high-risk period for economic turbulence.

“Don’t be left at the M&A station after the train has left,” Schaefer advises. This happened to many owners after the “Great Recession” that ended in 2009, and Schaefer thinks that owners who have labored since then to restore their companies to health probably won’t want to go through it again - especially if they’re now more than 60 years old.

Owners who do seize the present moment to buy or sell will find distinct market preferences at work, with some types of companies more desirable than others. The consultants agree that packaging and labels is where the action is hottest, and that flexible packaging producers are the hottest acquisition targets of all. Retail display and POP, wide-format, digital printing and direct mail are also good businesses to be in from the M&A point of view. 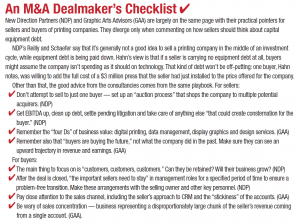 Ideally, companies being positioned for sale should be growing and profitable, and they should have made forward-looking investments in software and workflow automation. The reality is, however, that some printing businesses fail to come up to these marks and are struggling just to stay above water.

As Hahn notes, “if company management doesn’t know what they’re doing next Wednesday,” the business won’t be a candidate for the kind of deal offered to a company with a clear strategic direction, a stream of repeat orders and solid profitability.

Schaefer agrees that more than ever before, “we are seeing an industry of haves and have nots” in M&A terms. He points out, however, that there’s hope for companies in difficult financial straits in the type of M&A transaction known as a tuck-in: a deal in which the buyer’s chief interest is the seller’s book of accounts. Plant, equipment and personnel aren’t typically included in tuck-ins, although they can be.

A company that wants to add production capacity or establish a footprint in a different region can do either by acquiring another company as a going concern with its operation and workforce intact. In this type of transaction, the key consideration is a multiple of EBITDA (earnings before interest, taxes, depreciation and amortization): the arithmetic that determines purchase price. In general, the more desirable the company, the greater the multiple and the sweeter the deal for the seller.

An EBITDA multiple, says Reilly, is a function of the perceived growth of the company being acquired and also of the size of its revenue, so that a business with higher annual sales than another business of the same type might get a fractionally higher multiple, as well. Companies seen as “haves,” especially packaging firms, might attract offers based on a multiple of 6; for less prepossessing businesses, the number might be closer to 3x. 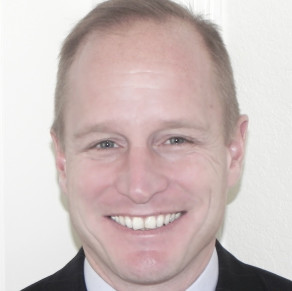 Reilly notes that sometimes, companies with little EBITDA have what appear to be exceedingly high multiples. These are based on the value of underlying assets and shouldn’t mislead sellers whose companies do have measurable EBITDA, he says.

“There needs to be an ‘E’ for there to be EBITDA,” counsels Hahn. When assessing a company’s value, in addition to EBITDA, market segment, account concentration and underlying asset values, GAA also considers what Hahn calls “the four Ds of value” - attributes that increase value in today’s market for printing companies: digital printing; data management; display graphics courtesy of wide-format; and design services. In Hahn’s view, a company with unique distribution capabilities earns an extra half “D.”

Hahn says that multiples for commercial printers currently range in very general terms from 3.5 to possibly 5 or 6, depending on many factors including “4D” characteristics. In packaging, the multiple could be 5 or 6 for folding carton producers, 6 for label printers, and 7 or 8 for flexible packaging operations.

Hahn, Schaefer and Reilly agree that although printing company owners generally understand what EBITDA is and how multiples work, many don’t have realistic ideas about what their companies actually would be worth to buyers. Reilly says people go wrong either by basing their thinking on “what happened in the 1990s,” when the industry was still flush; or by assuming that others will pay for unrealized potential in their businesses that they themselves failed to develop.

Sellers almost invariably overestimate the value of their equipment, according to Hahn. The only way to get an accurate estimate, he adds, is through a professional, industry-specific equipment appraisal, the results of which probably will be surprising to many.

Encouraging news for owners of companies with solid value is that buyers are out there looking for them - and that any offers they may make will be well-financed.

Hahn calls the banks “very eager to lend” acquisition capital to qualified borrowers at rates that remain low. Banks that wrote off the printing industry five years ago are open to doing business with it now, Schaefer concurs. Reilly points out that banks base their lending decisions on cash flow and collateral, especially the latter. “When the collateral is there,” he says, “there appears to be money.” 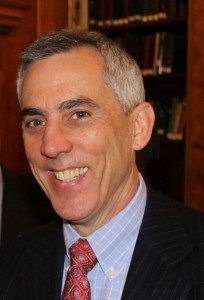 Mainstream banks aren’t the only sources of funding for M&As. Hahn says that GAA is regularly approached by private equity (PE) investors looking to create or expand platforms in printing and packaging. According to Schaefer, about 50% of NDP’s deals currently are financed with private capital, some of it coming from “boutique” PE firms seeking opportunities in specific regions or industry segments.

With 2018 showing every sign of being another strong year for M&A activity, owners of printing businesses would do well to ask themselves what their first moves in this direction should be - even if they’re not actively considering buying or selling at this time.

The consultants have tips for both types of transactions (see sidebar above). As general guidance, they recommend soul-searching and self-discipline.

As a would-be seller, “you have to assess yourself” to make certain that you are personally prepared to sell and that your company is salesworthy, Schaefer advises. Reilly points out that since selling is something that most owners do only once, it shouldn’t be undertaken without competent professional advisement. The same is true for buyers, even those who have been through more than one acquisition cycle.

M&As aren’t an unalloyed blessing for the industry. They can close plants, eliminate jobs and erase years of proud tradition. And, as Michelson writes, when acquirers target specific sectors with aggressive buyouts, “the impact of consolidation like this on the printing industry as a whole from the standpoint of entrepreneurial-driven innovation, nimbleness, and job creation and stability, becomes debatable.”

But, M&As are and will remain a reality of the printing business, and ultimately nearly every company will be touched by them in one way or another. If there’s an indisputable trend in printing M&As, this surely is it.

Why Are Salespeople So Frightened to Negotiate?

Are You Sure You Want to Quote That Print Job?