Taylor Corp. acquired its first production inkjet press in 2009, and it has been a proponent of the technology ever since. But, given that the company — ranked sixth on the 2019 Printing Impressions 400 list of the industry’s leading print service providers — consists of 80 subsidiaries operating in 25 states and nine countries, any technology naturally would need time to make its influence felt throughout an organization of such vast size.

Inkjet technology gained a higher profile within the Taylor family when a business unit of one of its companies recently became the first printing site in the world to install an AccurioJet KM-1e sheetfed color production inkjet press from Konica Minolta. The press, an enhanced version of Konica Minolta’s successful AccurioJet KM-1 platform, is expected to broaden the range of what the business unit and its parent company can produce, achieving new levels of quality and cost efficiency for both.

The B2+ format, LED-UV AccurioJet KM-1e went into full operation at FolderWorks, a division of Navitor, at Navitor’s North Mankato, Minn., headquarters in March. Both are trade printers that distribute exclusively through reselling partners, with FolderWorks specializing in folders, packaging, and converted products, while Navitor provides a complete selection of commercial printing and business stationery items.

The AccurioJet KM-1e is the first production inkjet press the companies have adopted, although both use other kinds of digital printing equipment. Rustin Luedtke, GM of FolderWorks, says the AccurioJet KM-1e will help his division offer its customers “the best folder experience” in two ways: by making it possible to print on a greater variety of substrates, thanks to UV technology; and by serving as an alternative to offset printing for the short-run, 24-hour turnaround orders that make up half of Folder-Works’ volume.

Luedtke also sees the AccurioJet KM-1e as a way to move more aggressively into folding carton production, an application FolderWorks began exploring last year. He says that, as a printer and converter of folders, “we were already in this space in some ways.” Luedtke thinks that the AccurioJet KM-1e — with its ability to print on offset coated and uncoated stocks up to 0.6mm thick — will assist FolderWorks in its push “to make ourselves a bigger presence in that market.”

Darin Underwood, operations manager at Navitor, regards the production economy of the AccurioJet KM-1e as one of its most attractive features. He says that because the press has a higher “sweet spot” than what is typical for digital printing equipment, it should be able to handle quantities that normally would have to be run on offset presses. Shifting work to the inkjet press will free the offset equipment, which currently is running close to capacity, to take on more high-volume work.

Underwood also notes that, because it is an inkjet system, the AccurioJet KM-1e permits “paying for the ink rather than for the click” as the main cost component of operating the press. He explains that, depending on coverage, it can be more economical to print based on the total amount of ink consumed instead of on the number of impressions delivered (where each impression incurs chargeable clicks for individual colors).

Luedtke emphasizes substrate versatility as the primary selling point of the AccurioJet KM-1e for FolderWorks. He says that other presses the division looked at during its search for an inkjet solution would have required printing with inkjet-compatible papers or post-coating sheets to protect the ink. In contrast, instant-cure UV printing on the AccurioJet KM-1e enables FolderWorks to run all of the stocks it customarily uses, and lets it experiment with non-paper substrates as well.

Test Files by the Thousands

Luedtke, Underwood, and others spent two years evaluating their options in inkjet technology before deciding upon the AccurioJet KM-1e. It was a rigorous process that involved sending thousands of job files to Konica Minolta for print tests. One objective, according to Underwood, was to monitor the performance of the printheads in runs with varying degrees of ink coverage on commonly used stocks — watching for defects like banding, dropouts, and ghosting.

Underwood acknowledges that when it came to satisfying his high expectations for print quality, the AccurioJet KM-1e “met most of them.” Luedtke praises the device for doing “a fantastic job” in the variety of testing applications that FolderWorks required and gives it equally high marks for the breadth of the PMS color gamut it can match.

He also cites the precision of the substrate feed and transport systems built for the press by Komori, which co-developed the original KM-1 platform with Konica Minolta. (Komori sells the press under its brand as the Impremia IS29.) The sheet handling, the substrate versatility, and Konica Minolta’s reputation for service, are the three principal reasons that Taylor Corp. selected the AccurioJet for FolderWorks and Navitor, according to Luedtke.

“We’re really very thorough in vetting new technologies,” he says of the scrutiny that Taylor Corp. companies apply to their investments in production equipment. “We may have been a little more diligent than others.” The press that stood up to the test is the latest iteration of an inkjet solution that Konica Minolta introduced commercially in 2016, and has refined continuously in the years since. 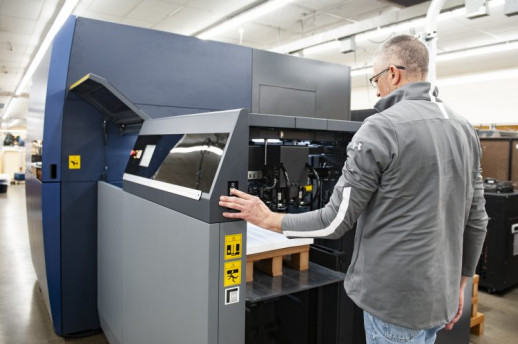 The AccurioJet KM-1e is a sheetfed LED-UV inkjet press that prints in four colors at 1,200x1,200 dpi. Its 23.02x29.53˝ maximum sheet size enables the output of jobs in six-up, letter-sized formats at speeds up to 3,000 sph (simplex) and 1,500 sph (with automatic duplexing). Konica Minolta markets the press as a variable printing, short-run production solution that can handle a wide variety of commercial, packaging, and specialty substrates without need of pre- or post-treatment, or external drying time.

The “e” in AccurioJet KM-1e stands for a number of under-the-hood technical enhancements that make the device more versatile, productive, and efficient.

For example, new Konica Minolta inkjet heads, and a reduced gap between the heads and the substrate improve image quality. Downtime between jobs has been shortened from 60 seconds to 27 seconds with the help of features like faster paper profiling and automatic setup for the specialty substrates the press can work with. These now include clear transparent media, including backlit; foiled board for folding cartons and packaging; plastic for ID cards; canvas; metalized and colored sheets; and synthetic papers.

Market launch for the AccurioJet KM-1e took place in June. Ed Bokuniewicz, product marketing manager at Konica Minolta Business Solutions U.S.A., says that currently installed KM-1 models can be field-upgraded to enhanced status with a kit to be made available this summer.

“The nice thing about the KM-1e is that everything comes in a box, and it’s ready to go,” says Luedtke of the press and its suite of enhancements. The Taylor Corp. executive describes the task of installing it, and getting it fully up and running, as “a really easy implementation” that took about five weeks, including time for training.

Luedtke notes that because FolderWorks and Navitor have been enjoying strong growth in recent years, adding the AccurioJet KM-1e probably won’t mean taking any existing press equipment off line — the new press was brought in to increase capacity, not to replace it. When asked about ROI, Luedtke did not give specifics, but added that installing a second press in the near future was in the company’s growth plans.

Underwood says that a printing company planning its first investment in a production inkjet press should keep in mind that consumables will be the biggest factor in the total cost of operating the equipment. In print tests with the vendors, he advises, “keep sending them things” that can be compared with the output from the other processes that the shop uses. And, don’t forget to ask customers to rate the results.

Luedtke admits that during the process that led to the selection of the AccurioJet KM-1e, there were some “perceptions from years past” about inkjet that he and others at Taylor Corp. had to set aside.

But, he also believes that, “it is incumbent on all of us to understand what technologies are emerging in the print production space.” In that spirit, Luedtke says he’s confident that interest from customers like Taylor Corp. will inspire developers like Konica Minolta to push inkjet technology even further in the direction that adopters like him hope to see it go.