What could be better than warm air, a beautiful resort, networking with printing industry executives and the sweet smell of victory on the golf course? For those in the printing industry who want to experience all of that and more, the 31st annual Pro Imaging Expo & Golf Championship will be held at the Casino Del Sol Resort and Sewailo Golf Club in Tucson, Ariz., from April 22-28, 2018. The event, which has been co-hosted with the Specialty Graphic Imaging Association (SGIA) since 2017, will also include educational sessions from three industry leaders.

The event will begin with dinner and a live drawing to determine the golf tournament teams, which are selected at random. After the first tournament day filled with some friendly competition and extensive networking, teams will be split into two "flights" based on performance, a top half and a bottom half. The following, and final, day will mark the conclusion of the tournament with the top five teams of each flight going home with prizes ranging from full sets of golf irons to drivers, putters, golf bags, utility clubs, crystal trophies and - the crème de la crème - a replica green Masters jacket reserved for the attendee who finishes in the top spot.

According to Toren Prawdzik, chairman of the Pro Imaging Expo, the event is unlike most events because it gives attendees exclusive access to some of the top executives in the printing industry - including presidents and CEOs of the biggest suppliers in the industry - in a laid back, networking environment.

"It's an interesting event," Prawdzik says. "A lot of the people who come are direct competitors, but we bring them together to golf, network and talk about each others businesses."

Who Should Consider Attending?

Even if you're not Tiger Woods or Jordan Spieth, everyone is encouraged to attend. The value of the event lies in the networking and educational sessions. For those in the printing industry - commercial printers, package printers and more - this event is for the decision-makers who want to talk about movement for their business, Prawdzik says. Since executive leaders at some of the biggest vendors attend the event, business owners will have a direct line of access to them to discuss the future of their business.

"When [attendees] come down, it's a lot of heavy internal talking between companies," he says, "but it's also heavy networking with the executive levels of all of those companies, plus the sponsors." 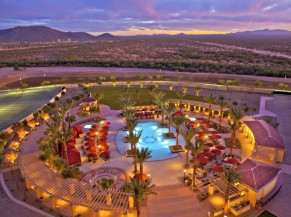 Attendees can relax at the Casino Del Sol Resort pool.

Another big draw, Prawdzik adds, is that spouses are welcome to come to the event, either to play in the tournament or just to relax at the resort. It's an opportunity to involve spouses in the industry, which isn't normally the case with other events and trade shows.

The event connects industry leaders and business executives, enabling them to build lasting relationships. Prawdzik points out that many attendees, based on the connections they make, end up reconnecting and spending time with fellow attendees at future trade shows and events, reminiscing about their time together at previous Pro Imaging Expos.