The Target Report: Getting Flexible in Your Middle Years 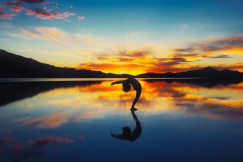 A visitor to TC Transcontinental’s website is now greeted with the opening line, “TC Transcontinental is a leader in flexible packaging in North America …” That’s a bold statement from a company that has managed to transform itself in just four years from primarily a publication and commercial printer, with no packaging experience, to become a powerhouse in the flexible packaging segment. TC’s latest acquisition of Coveris Americas, a billion dollar flexible packaging printing company, is a casebook study of executing a well-defined strategic transformation. The company has acquired an adjacent expertise (building on its core competency in roll-based printing) learning to manufacture flexible packaging while divesting assets no longer deemed essential to the new vision of the company’s future.

The acquired company, Chicago-based Coveris Americas, was part of the larger Coveris Holdings group, a portfolio company owned by Sun Capital Partners, which itself was formed in 2013 when Sun Capital combined five packaging companies together; the US-based company Exopack formed the core and basis for the roll-up. In 2017, Sun Capital announced that it was splitting Coveris Holdings into four units and launched the sale process for the Americas unit which operates 21 production facilities, located primarily in the Americas, UK and Australasia. During its ownership by Sun Capital, Coveris Americas acquired a shrink sleeve printing company in Ecuador, as well as flexible packaging companies in Guatemala and New Zealand. The combined companies, merged and tidied-up into one cohesive unit by Sun Capital, was ready-made for TC’s next and largest step into the flexible packaging market.

This latest acquisition is the sixth in the implementation of TC’s strategic plan to develop a robust position in the market for flexible packaging, clearly articulated by the CEO in March of 2014 (See The Target Report – March 2014). The company has subsequently been laser-focused on achieving its goals, reporting that with this latest deal, on a going-forward basis, packaging will represent 48% of the company’s revenue, more than any of the company’s traditional service segments such as retail-related services (27%), Newspapers (7%), or magazines and books (7%). 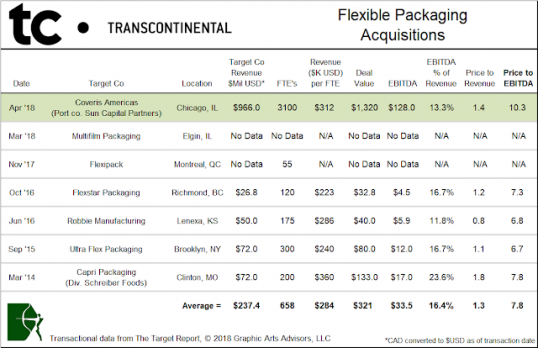 Over the same time period during which TC built out its flexible packaging unit, beginning in 2014, as we have noted in the Target Report, TC completed six divestitures, all of which were traditional printing and newspaper assets. When it embarked on its new path forward in 2014, the printing division had 27 printing plants. At the end of 2017, the division had 18 plants. During that same time period, operating earnings in the printing division increased from C$253 million to C$295 million. 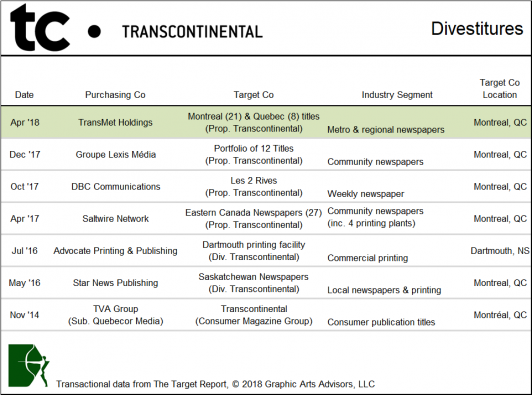 Private equity-backed ProAmpac is also building out a network of flexible packaging plants, recently buying Rochester, NY-based Pactech Packaging. The acquired company specializes in fitting spouts and dispensers to flexible packaging in a clean environment and serves medical and consumer product markets. ProAmpac is itself the product of a merger between Ampac and Prolamina in 2015, engineered and backed by Wellspring Capital. Wellspring hung in there for one acquisition and then flipped ProAmpac to the Pritzker Capital Group (See The Target Report – Moving Pieces Around on the PE Chessboard). Pritzker, now operating under its new moniker PPC Partners, immediately embarked on an aggressive acquisition campaign, having completed five deals prior to the purchase of Pactech. The company now has 28 manufacturing facilities, mostly in the US, with additional locations in Europe and Southeast Asia.

It’s clearly a hot market for deals in flexible packaging segment, with TC breaking into the double-digit range, when it priced Coveris Americas at 10.3 times EBITDA to emerge as the winner in the sale process for Coveris Americas. While we won’t know what went on behind the scenes in that process, we can surmise by the result that it’s likely that several bidders were involved. TC obviously concluded that this was a unique opportunity and acted aggressively to take a significant step forward to realize its long-term strategy. TC has proven itself to be agile in its “middle age,” adding new skills and shedding unwanted weight, ready for the next stage of its corporate life.

Drummond, a diversified provider of printing and related services headquartered in Jacksonville, Florida, announced its fourth acquisition in the Atlanta metro region, buying ProGraphics. The acquired commercial printer will become the new base of Atlanta operations for the company as it executes on its regional expansion strategy, establishing a strong position in the vibrant Atlanta area.

Logan Marketing Group, based in New Jersey, acquired IBS Direct in King of Prussia, Pennsylvania. Logan Marketing plans call for IBS Direct to be the platform upon which it will build a direct marketing company, specializing in direct mail, collateral and free-standing inserts. Logan also owns Innovative Fulfillment & Mail, a niche company serving the art market with printing, framing, mailing and fulfillment.

Walker360 acquired Seek Publishing which prints and markets several products lines, including greeting cards and gift items that evoke nostalgia for places and times past. Walker360 is a diversified graphic services company that offers creative services, including marketing programs specifically designed for in-home service contractors. Walker360 is headquartered in Montgomery, Alabama, and has an additional location in Atlanta, Georgia.

New London Communications, in Alpharetta, Georgia, expanded its services into specialty window graphics with its purchase of Coolscreen Graphics, nicely piggy-backing on New London’s expertise in wide-format, interior signage and dye-sublimation printing expertise. New London was formerly a portfolio company of Valesco Industries, acquired by the current management team in a buyout in 2016.

Calise Partners, an advertising agency in Dallas, purchased design and print management company Printabilities, also located in Dallas. The acquired company brings web-to-print technology to its new parent. Myers Printing in Kentucky acquired nearby Feeback Printing, in a tuck-in transaction ending the independence of Lexington’s oldest continuously operating commercial printing company. The seller’s wife, commenting on the sale, noted that “Herbie is 84 and still working - we needed a rest.” 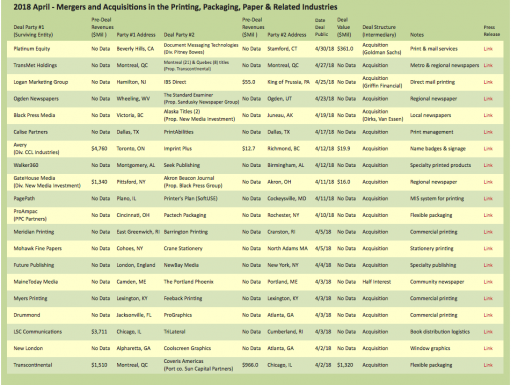 Click here for the online version of The Target Report April 2018 for the complete deal logs with additional information and links to sources.