The Target Report: Consolidation in Commercial Printing Rolls On

The roll-up consolidation process is in full swing and gaining momentum in the commercial printing segment. The Mittera Group, based in Iowa and operating plants as far flung as New Jersey, Long Island, Florida and Texas, as well as much closer to home in Wisconsin, announced the acquisition of the Kansas City operation of Henry Wurst, a web and sheetfed commercial printer.

The sale to Mittera is a sudden reversal for the Henry Wurst company, which was confident enough in 2015 to invest a reported $8 million in a new five-unit Goss Sunday 2000 press to modernize its high-volume heatset web printing capabilities. The new press went into production in mid-2016 and doubled the potential page output of the two older presses that were retired in the upgrade. The company president, commenting on the company's first major investment in quite some time, stated that the new press "puts us back in the game." Shortly thereafter, in early 2017, Henry Wurst announced the acquisition of Universal Printing, a similarly configured heatset and sheetfed commercial printer located in St. Louis, at the far eastern end of Missouri. In what was a clear consolidation play, the Universal production facility was shuttered, moving production to the renewed platform at Henry Wurst.

The purchase of Henry Wurst by Mittera follows a well-defined playbook in which the Iowa-based consolidator has grown by acquiring larger and larger commercial printing companies, some of which were roll-ups themselves of several venerable companies that had been proudly independent family-owned printing companies. As the prospects of the industry have changed, many of these companies have come on the market at discount. Today's consolidators in commercial printing are picking up the pieces and rationalizing the excess production capacity by closing facilities and shedding less productive equipment. While the purchase price for Henry Wurst was not disclosed, it was widely known that the Mittera's acquisition last year of New Jersey-based Earthcolor, itself comprised of several defunct printing companies, was a distressed sale under pressure from the company's lenders. That deal was structured as a "composition" (i.e. an orderly non-bankruptcy sale of intangible assets and fixed assets, accompanied by a wind-up of the predecessor corporation). That transaction catapulted Mittera onto the national stage; now a leader among the emerging consolidators we noted in past reports (see The Target Report: The Roll-Up Returns (to Commercial Printing - September 2014). 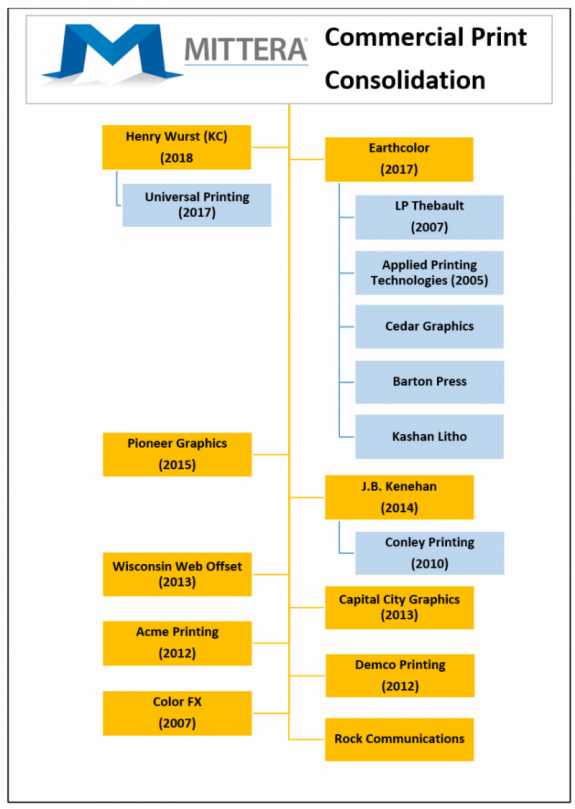 H.I.G. Capital, one of the largest global private equity funds, once again voted with its wallet and expressed confidence in the future of print, announcing the acquisition of Vision Integrated Graphics. Vision, as its now known, is a Chicago area data-driven direct mail marketing powerhouse, with ancillary marketing services, retail display print, and fulfillment services. This is a secondary private equity buyout for Vision, which was previously backed by Concentric Equity Partners.

At H.I.G. Capital, commitment to the print industry runs deep; the fund established a separate platform investment when it acquired Digital Room in January 2018 from venture capital firm Insight Ventures. With revenue in excess of $80 million, Digital Room has four production plants and a multitude of web-to-print website brands including UPrinting, NextDayFlyers, PrintPlace, PrintRunner and 48HourPrint. H.I.G. subsequently bolted Logo Sportswear on to Digital Room. The acquired company sells promotional items and apparel, all via online e-commerce sites.

Aldine's departure from Varick Street is the latest in a long line of printing company exits from the heart of the traditional printing district in Manhattan, now populated by swarms of Millennials working at tech start-ups, drinking lattes at Starbucks and grocery shopping at the new Trader Joe's. Printers in Long Island City, home to many of the printing companies exiled from the Varick Street print mecca, now face similar gentrification pressure which is sure to increase as Amazon settles in to its designated second HQ location. Some have already made the move out to the suburbs, completely abandoning New York City as a place to print.

SGM Technologies, a Dallas-based digital marketing agency, acquired United Group Printing,** also located in Dallas. Structured as a reverse tuck-in, SGM acquired United as a fully operating offset and digital printing facility, including the real estate, as the first step in its plan to grow by acquisition.

In the vast western Canadian region, the Burke Group, headquartered in Edmonton, Alberta, announced the acquisition of two Calgary-based commercial printing companies, Printcor and Topline Printing. Given that the acquired companies are more than three hours distant from Burke's headquarters in Edmonton, across the Canadian Prairies, the plan is to consolidate the operations into the existing Topline plant in Calgary.

In 2017, the Burke Group acquired its major competitor in Edmonton, McCallum Printing. Sounding a lot like his American roll-up counterparts, the owner and CEO of the Burke Group stated that he "is moving quickly and strategically to drive the print market forward in Western Canada." We expect that we'll hear from Burke again. 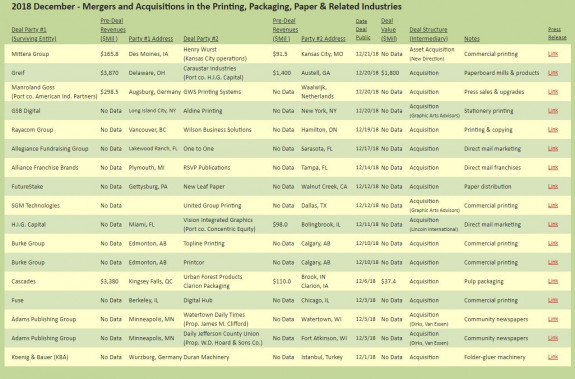 Click here for the online version of The Target Report December 2018 for the complete deal logs with additional information and links to sources.