Based in North Attleboro, Mass., Artcraft Co. is a full-service solutions provider with a wide range of equipment and services to offer to customers across the trade and commercial print spectrum. But when it first began life in 1939, it was a shop that specialized just in engraving services for trade printers looking to outsource that particular application.

Those engraving roots persisted even after it was sold in the early 1960s to current president John Dumouchel’s grandfather, who at the time also owned a print shop in Rhode Island. Dumouchel’s father was ultimately tasked with running Artcraft, and then purchased it outright a year later, starting the company on the path it still walks today.

“At the time [my grandfather purchased it], this was a complement to the printing business he already had,” Dumouchel says. “But after the purchase, the person who was going to stay and run it for him left — along with about half of the employees — to start his own competing business down the street. So my grandfather asked my dad, who just graduated from Providence College, to step in and see if he could salvage it. And he did, and stayed there the rest of his life.”

From Engraving to Printing and Beyond

Artcraft remained focused on engraving until the early 1980s, when Dumouchel’s father decided that it was time to start expanding services. At that time, he was still producing trade work, but had direct customers asking for print as well — work that had to be outsourced.

“My father felt it was important to be direct to the customer,” Dumouchel notes. “While he valued the trade work greatly, he was a born salesman, and felt dealing directly with the customer greatly improved communication and created a much more loyal client base.”

That seemingly small decision to offer services beyond engraving, kick-started a tsunami of change that has continued, sparking the evolution that led to Artcraft being a perfect example of how diversification can lead to huge success.

“From the ’80s to today there has been a ton of change,” says Dumouchel. “The biggest change has been technological, and trying to embrace it. Today, 85% of our work comes in through the Internet, and while we still do trade work, about 90% to 95% of our jobs are direct-to-customer.” 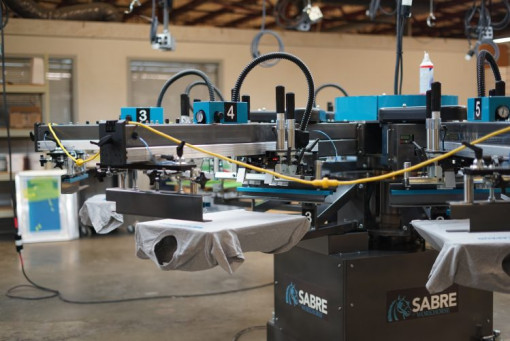 T-shirt printing is one segment that Artcraft is betting on, using the current downtime to upgrade to high-speed, automatic, state-of-the-art equipment.

In part, that is because Dumouchel and his team have continued a process started by his father, embracing new technologies and what they can offer the shop. While engraving is still a part of the service mix, a testament to the roots of the business, he points out that it has become the smallest division in the organization today.

But even engraving hasn’t escaped modernization — about eight years ago the company installed solar panels on the roof, which feeds roughly 60% to 70% of the power for the entire business. “I like to say our engraving department is powered entirely [by solar energy],” Dumouchel says. “While the engraving business is smaller than it used to be, it is the most environmentally friendly: it’s powered by solar energy, the inks are water-based, and the majority of paper used is 100% recyclable.”

Other services include digital printing, embroidery, screen printing, wide-format printing, full-color offset printing, thermography, diecutting, foil stamping, and embossing. Dumouchel notes that there are upwards of 11 processes all operating under the same roof, making Artcraft a “pretty unique company” in that regard.

The addition of all the various services, however, wasn’t arbitrary. “It was all customer needs-based,” according to Dumouchel. “We didn’t buy equipment and then try to sell what it does. Rather, we have had inquiries, or work we were outsourcing or had to turn down to the extent where there was enough demand to bring the equipment in-house. I just feel everything runs better keeping as much as we can in-house.”

Like most businesses, 2020 has proven to be unexpectedly tough for Artcraft, as it struggles to manage a business landscape that changed overnight. Dumouchel reveals that his business dropped nearly 85% when jobs, such as business cards (which represented approximately 35% to 40% of total sales) and other staple work, evaporated as the country shut down due to the pandemic.

Dumouchel, however, decided to take advantage of the situation as much as possible. “First and foremost I looked at how we can save jobs and make us stronger. I am blessed to have exceptional, loyal, and highly creative employees that know I have their back during these unprecedented times. I first decided to upgrade all of our t-shirt equipment and bring the work we were outsourcing in-house.” he says.

“We now have brand new, high-speed, automatic presses, and a really state-of-the-art front-end system from Europe to make the screens. I focused on that because I figure it will be a more stable business than business cards, and will save jobs.” Previously, t-shirts represented about 7% of Artcraft’s business,” but Dumouchel has seen growth in that area, and anticipates it will continue to grow, even outside of COVID.

He has also taken this opportunity to upgrade his wide-format division, after one large customer asked the shop to take on their “back-to-work” signage for approximately 1,000 office buildings in both North and South America. He notes that they now operate four high-end wide-format presses — two 64˝ HP Latex units and two 64˝ Roland printers — along with two off-line automatic cutters, laminators, and five hand cutters. “We can basically produce any kind of sign asked of us now,” he says.

Signage is one area where he is also seeing a great deal of growth during the pandemic, as businesses are seeking floor graphics, banners, and other elements to help direct customers through locations, and to convey important heath and safety information. 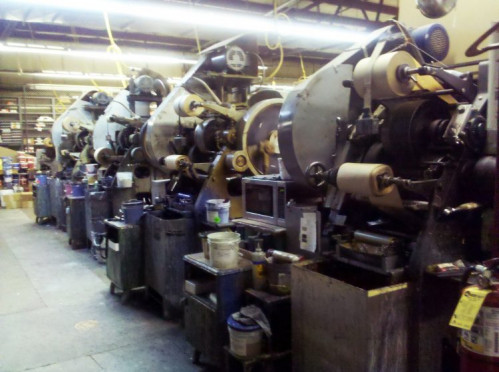 Artcraft’s engraving department is powered by solar energy, the inks are water-based, and the paper is 100% recyclable, making it the most environmentally friendly division within the company.

The combination of the wide-format and t-shirt growth “hasn’t returned revenue to what it was, but it has helped,” Dumouchel reveals. “I think [wide-format] will continue to be a bright spot for us, as well. Finding high quality material has been hard during this time, but we have now stockpiled [enough substrates] that we are at a point where we feel we can sell to other people. Our first goal was not to disappoint that original commitment — we’re up and running smoothly and ahead of that now, so I feel we can start to expand.”

He is particularly pleased that his entire wide-format department now has brand-new equipment, with all the latest technologies, and is, “very impressed with what my team here has accomplished, and with what these machines can do. I enjoy making a high-quality product, technology, and trying to figure out how to accomplish what the customer needs. We are now an exceptional and sizable high-quality signage company.”

For the future, Dumouchel plans to look at expanding his wide-format business beyond the current signage opportunities he is producing, noting that vehicle wraps in particular are interesting. He admits he doesn’t currently understand that business, so he would have to learn it first. He also has the capacity to produce as many as 5,000 t-shirts per day now, and hopes to see that capacity get more fully utilized as businesses start to bounce back.

“I’ve made a lot of investments during the past two to three years in technology and equipment,” Dumouchel says, “and, as a result, our efficiencies have increased dramatically. I believe that technology and digital marketing are things we’re going to focus on in the future while still being true to our core. We are printers, craftsmen (and women) delivering the highest quality product available with an exceptional customer experience.”

Artcraft is the perfect example of how being open to new technologies and techniques can help transform a business and lead to even greater successes. Even with COVID-19 impacting the business, Dumouchel is positioning his company to ensure that when the re-opening begins to really pick up steam and the work begins to return, he will be ready to step up and take advantage of it.

Dumouchel has built his entire business around looking forward to the future, and that is a philosophy that has served him well, and one that will continue to pay dividends.

PRINTING United, originally scheduled to take place at the Georgia World Congress Center in Atlanta on Oct. 21-23, 2020, is moving to a comprehensive digital platform, consisting of three power-packed weeks of hosted global programming called Insight Days. The online event will begin Oct. 26 and run through Nov. 12. PRINTING United 2021 will be held Oct. 6-8, 2021, at the Orange County Convention Center in Orlando, Fla. For more information, visit printingunited.com