It’s been almost 50 years since the young Dustin Hoffman, in his role as the confused Benjamin in the 1967 movie "The Graduate" was offered sage advice about his future career. In the now famous line, a well-meaning elder, in a solemn tone, advised Benjamin, “Just One Word: Plastics.”

That famous phrase seemed superficial to many at the time; the word “plastic” became a synonym for shallowness or anything perceived as phony to the younger generation of the 60’s and 70’s. However, for the printing and packaging industries, that advice still resonates as technological advancements, such as multi-layer films, UV inks, LED curing systems and other developments continuously improve our ability to print on plastics. It turned out that there was, and still is, a future in plastics.

Printing on plastics, specifically manufacturing plastic cards of all sorts, was the target of Multi Packaging Solutions in its recent acquisition of i3 Plastic Cards. Multi Packaging Solutions, a global print and packaging roll-up that has achieved revenues in excess of $1.6 billion since its founding in 2005, is already a significant player in the market for transactional cards including credit card issuers Visa, MasterCard and American Express. The addition of Dallas-based i3 Plastic Cards adds capacity to produce up to another 2 million cards per day, focused on printing gift and loyalty program cards.

Plasticard Locktech International (PLI) secured a $12.4 million investment, structured as mezzanine debt, from Mosaic Capital Partners to fund its acquisition of Production Services Associates (PSA), a plastic card manufacturer based in Romeoville, Ill. PSA, formerly owned by Spell Capital, specializes in so-called “closed loop” card production; gift cards that can be used at only one brand, such as a Starbucks or Home Depot gift card. Other products produced by PSA include membership cards, loyalty cards (often with a detachable small version of the card for your keychain), coupons and faux credit cards used in marketing solicitations. The acquiring company, PLA, in addition to gift cards, produces addressable plastic keycards used in hotels, resorts, cruise ships, colleges and casinos.

As a bonus for these printing companies, plastic card programs often include additional printed elements, printed on paper or card stock, such as carriers, mailers and cover letters, often personalized. Of critical importance to many of the programs using plastic cards, the cards may have monetary value and require significant security at all stages of production. Card programs often require management of highly sensitive confidential data needed for barcoding, embedded information on magnetic strips and chips, activation, redemption and proper personalization. Maybe that sage advice to that young man, revised if the movie was remade circa 2016, would be, “Just One Word: Data.”

Commercial Printing
OneTouchPoint, the Wisconsin-based roll-up in the commercial printing segment, expanded its presence in the Cincinnati market with the acquisition of PrintManagment. The acquired company brings additional digital printing and data management capabilities into the OneTouchPoint marketing services platform. The company now boasts additional locations in Texas, Colorado and Arizona in addition to its original core Midwest locations.

On the other side of Ohio, in the northeast corner of the state just south of Cleveland, Traxium continued its roll-up of smaller local companies in commercial printing and marketing services with the acquisition of McKinnon Printing. McKinnon will be tucked into Traxium’s Printing Concepts division in Stow, Ohio. This is the second acquisition this year for Traxium (See The Target Report – July 2016).

Packaging
November was another busy month for M&A activity in the packaging segment. In addition to the aforementioned acquisition of the plastic card printer, Multi Packaging Solutions acquired AJS Labels in the UK, adding to its global capacity to print pressure sensitive labels for packaging applications.

Novolex acquired the packaging converting operations of Burrows Paper. Burrows was divided and sold in two separate transactions during November, ending almost 100 years of family ownership (the paper operations were sold to Twin Rivers Paper). Novolex was created by private equity firm Wind Point Partners with the combination of Hilex Poly, Duro Bag Manufacturing and Packaging Dynamics in 2014 (See The Target Report – November 2014), and added to with the acquisition of Wisconsin Film & Bag in 2015.

Fort Dearborn, producer of prime labels of all sorts; cut & stack, pressure sensitive, roll-fed, and shrink sleeve labels, purchased SleeveCo which prints stretch sleeve labels and supplies associated application equipment. The newly acquired facility in Dawsonville, Ga., brings the total to 15 production locations across the U.S. and Canada. Fort Dearborn itself was acquired earlier this year by Advent International (See The Target Report – “Private Equity Loves Labels"), previously having acquired both AC Label and the label business unit of the FetterGroup in 2013.

Sonoco, the nearly $5 billion conglomerate, maybe best known to printers for its ubiquitous paper tubes and cores, expanded its diverse capabilities in packaging with the acquisition of Plastic Packaging, manufacturer of flexible packaging located in Hickory, North Carolina. The acquired company produces a wide variety of packaging, including stand-up pouches, bags, and sleeves, with a focus on serving the pet products, food and other consumer product markets. 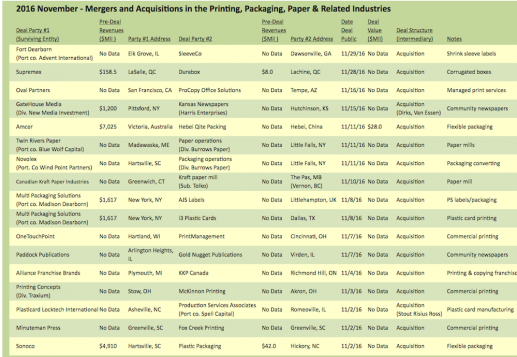