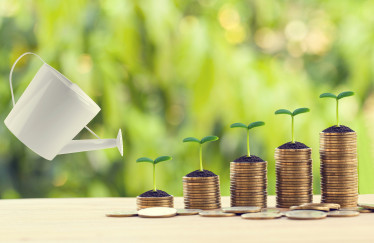 Not a month goes by in which private equity does not have a significant impact on the printing, packaging, and graphic communication businesses. The smart money keeps on coming, as fund after fund establishes a position in the industry with a new platform investment, and soon thereafter embarks on an aggressive roll-up campaign. Initially limited to primarily packaging companies, some private equity firms have eschewed the high multiples that top performing packaging companies command, investing instead in the commercial printing industry or other specialty segments such as wide-format products, or book printing. Funds are backing direct mail printing companies and then layering on data analytics, programmatic digital advertising, email campaigns, and other integrated marketing services.

In addition to growing their platform companies via bolt-on acquisitions, most private equity firms will also seek to juice up internal performance and organic growth. Many funds will professionalize the new platform company with an upgrade to the accounting system and improved reporting standards. Critical to growth, funds will judiciously water the company with new capital equipment investments that are needed. Private equity will bring a disciplined and structured approach to the management of the operations.

Some private equity firms have a long-term vision, a build-and-hold strategy; however that is the exception. Most have obtained their funding from limited partners to whom they have committed a return of the initial investment plus a superior return, all within a predetermined time frame. With the clock ticking on when the return of capital is required, the funds eventually must find a buyer and exit their investment. Hence, we see secondary, and even tertiary, buyouts, in which one fund sells its platform company to another private equity fund. The process begins anew, and the roll-up continues.

Fortis Solutions Group is an excellent example of a packaging company that has executed a strategic growth plan with private equity backing. One of the most active private equity-backed roll-ups in the label printing segment, and now with its secondary sponsor, Fortis recently acquired West Coast Labels, located in Placentia, California. This was the sixth acquisition in 2022 by Fortis of a label printing company, building on their “One Fortis” strategy. Investment banker John Wynne started Fortis in 2010 with the purchase of Labels Unlimited, a one-location company in Virginia Beach focused solely on pressure sensitive label production. That was when the country was recovering from the Great Recession. Fortis now has twenty-two manufacturing sites across the US and employs over 1,300 people.

After an initial growth spurt that included the acquisition of several geographically diverse label printing companies, Fortis partnered with San Francisco-based Main Post Capital Partners in 2017. Main Post Capital Partners supercharged the next phase and Fortis acquired no less than eight additional companies in just under four years. One of those acquisitions, the purchase of Infinity Packaging, was itself a secondary buyout of a small label roll-up put together by Svoboda Capital. In October 2021, Main Post Capital Partners announced that it had exited Fortis, selling its interest in a secondary buyout to Harvest Partners, a private equity fund based in New York. Harvest hit the road running and provided support for the six companies added to the Fortis platform in 2022.

Wynne’s entry into the packaging business is not the typical story of a bootstrap startup or next generation succession into the family business. He did not have any prior printing or packaging experience but was attracted to the custom manufacturing nature of the business, as well as the ability for a small company in the label industry to focus on serving national brands. Wynne’s entry into the packaging industry as an outsider represents an example of a trend that we currently see reemerging in the post-pandemic period; professional executives from outside the industry seeking to acquire a modest size manufacturing company they can own and build upon. (Notably, other segments of the printing industry, including commercial printing, are not excluded from this renewed interest from outsiders.) 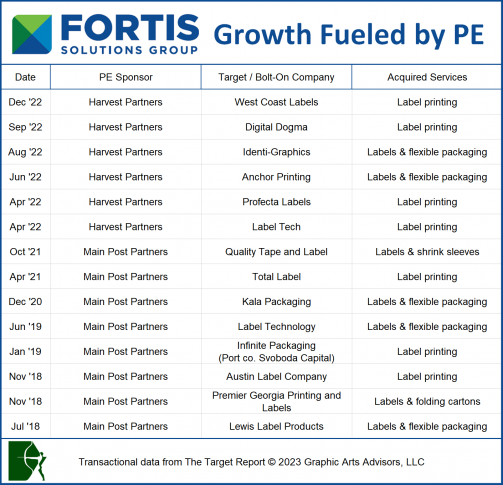 While not attracting anywhere near the level of attention as the packaging companies, the other print-related segments are now in the sights of some private equity firms. Investments in printing companies have been across a wide spectrum of specialties, including direct mail, consumer products, wide-format, and in a notable return to grace within the investment community, private equity investments now include general commercial printing companies.

The best example of this interest from private equity may be the investment by Snow Peak Capital, a fund based in Boulder, Colorado, which acquired a majority interest in Sandy Alexander, the venerable commercial printing company headquartered in Clifton, New Jersey. Working with existing management, Snow Peak indicated that its financial support would be utilized to improve company operations and margins, and explicitly would include growth by acquisition. No bolt-on acquisitions have been publicly announced yet in the eight months since the initial investment in the Sandy platform, but with new equity funding in place, we expect deals will be forthcoming.

Sandy has been down the private equity road before. Well before private equity was a major asset class and generally known as a force in the economy, Sandy had institutional investors. That relationship with an investment firm stood out at the time because most printing companies were either privately owned, or publicly traded.

Founded in 1963 as Alexander & Son, the company grew by acquisition and in 1969 merged with Sandy Printing to form the Sandy Alexander brand that still exists to this day. In 1972 Sandy Alexander was acquired by the Mickelberry Food Corporation, a public company that traced its roots back to 1926 and was originally in the processed meats business. As Mad Men fever gripped the business community in New York, Mickelberry joined in and acquired several well-known advertising agencies, some of which served clients in the grocery business. The advertising business led Mickelberry to acquire assets in the printing business, including Sandy Alexander, Carnival Press, and other printing interests.

In 1975, Sandy Alexander and Carnival Press were merged, and more acquisitions followed. By 1980 Mickelberry had become primarily an advertising and printing company; the revenues from these services then collectively represented three quarters of total company revenues. This was a prestigious time for Mickelberry. Listed on the New York Stock Exchange, no less a personage than Franklin D. Roosevelt Jr., son of the former president, chaired the company’s executive committee at the time of his death in 1988.

Under the auspices of the rebranded Mickelberry Corporation, Sandy acquired the sales of Americom in 1991, bringing current CEO Mike Graff into the organization. Rebranded once again, Mickelberry Communications was taken private in 1995 by Union Capital, a private equity fund founded by high-society attorney and businessman James Marlas. Married from 1984 to 1987 to actress Glenn Close, Marlas served on the boards of the New York City Opera, a college charitable foundation, and the French wine lovers association Commanderie de Bordeaux. Heady times in the printing industry, to be sure.

In July 2013, the Sandy Alexander management team bought out the private equity backers and, until this past year, the company was exclusively owned by that management team. With the sale this past year to Snow Peak Capital, Sandy Alexander reenters the private equity world, possibly more staid than the first go round, but ready to begin the next phase of a long and storied history. Acquisitions are sure to follow.

Sandy Alexander is not the only commercial printing company that appears ready to be supercharged by private equity. In 2022, Post Capital Partners acquired Ironmark, a diversified commercial printing company in Maryland. Soon after it was established as a platform company, Ironmark completed its first bolt-on, the acquisition of Millennium Marketing Solutions.* More will surely follow.

Arizona-based commercial printing company Prisma Graphic received backing from CenterGate Capital in 2022. Prisma had already begun its expansion program, prior to the entry of private equity, with the acquisition of two companies in 2021 in Nashville, Tennessee. The CEO of Prisma noted that CenterGate’s investment provides the company with the capital to further expand the Prisma platform. More acquisitions will follow.

* Graphic Arts Advisors, publisher of The Target Report, served as exclusive advisors to Millennium Marketing Solutions in this transaction. 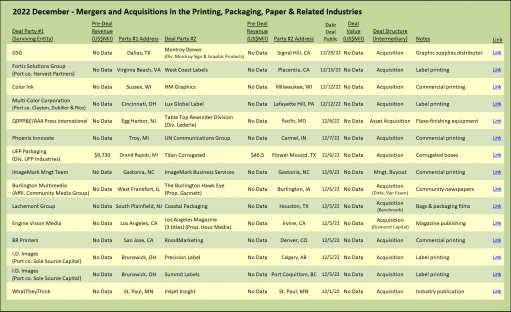