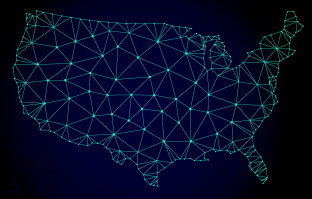 Postage rate increases now occur with a regularity that many wish would apply to the delivery service itself. Concurrent with rate increases, the US Postal Service issued new service standards a year ago that effectively made the reality of slower mail delivery its new goal. Nonetheless, even with the longer delivery time standards, the latest USPS Service Performance chart indicates that the overall performance of the postal system is just now at the level achieved in 2020 when the pandemic shut-down was at its most restrictive. In the alternate reality that exists at the US Postal Service, its ten-year goal is to deliver mail on time 95 percent of the time. For now, any postal region that achieves a rating of 90.25 percent or greater of on-time delivery, in accordance with the new lower standards, gets an “Above Target” rating. For those readers of The Target Report in the direct mail segment, just imagine telling your customers that ten percent of their orders will be late, but that is your company’s standard, so it's ok.

Despite the increased postage costs and degradation of postal delivery standards in effect for the past year, marketers continue to utilize direct mail as an effective communication channel. As a response to the relaxed delivery time standards for mail traveling any significant distance, direct mail providers have responded by acquiring companies or establishing new facilities distant from their home base.

Moore, the direct mail behemoth originally based in Tulsa, Oklahoma, has put another stake in the fertile ground for non-profit mailing services around Washington, D.C. with the acquisition of Communications Corporation of America (CCA). Over the past decade, Moore has built out a network of production facilities and support services laser-focused on serving the nonprofit organizations that require a steady outflow of fundraising and awareness messages to accomplish their mission. CCA now joins forces with the multiple Moore operations in the mid-Atlantic region.

Moore’s initial foray into the D.C. region was the 2009 purchase of the business and real estate assets of Barton-Cotton in a Chapter 7 bankruptcy proceeding. According to a press release at the time, Barton-Cotton’s expertise and customer base was in the non-profit community around Washington D.C. Barton-Cotton provided direct mail fundraising services, and also had a division that served religious organizations. Moore’s core company at the time, ResourceOne, based in Tulsa, Oklahoma, was also focused on working with non-profit organizations. The acquisition of Barton-Cotton was a natural fit for Moore, a company with plans to grow. That 2009 purchase in the midst of the Great Recession initiated a round of acquisitions and start-ups around the D.C. region.

The mid-Atlantic region was awash in non-profit organizations, and in a trend similar to the political direct mail and commercial printing businesses, the non-profit outreach business had become increasingly dominated by production procurement agencies that intermediated themselves in between the ultimate customers and the printing companies. Based in Vienna, Virginia, Production Solutions/PS Digital was a major player in the space, providing production management and procurement services focused on serving nonprofit organizations. Moore made its move in 2016 and acquired Production Solutions/PS Digital, heading upstream to enhance its position directly with the nonprofit organizations.

When the direct mail company EU Services shut its doors in 2017, Moore moved in quickly and set up a new company, Navistar, as a refuge and revitalized base of operations for the EU executive team and industry experts. EU Services originally operated as Envelopes Unlimited and over time had transformed itself into one of the early trailblazers applying digital printing to the direct mail industry. Those of us that competed in the east coast printing industry at the time may recall some of the excitement surrounding EU Services and its unique digital approach. That digital uniqueness eventually became commonplace, and when the end came for EU Services, Moore was there to pick up the pieces.

In March 2020, Moore reopened the former Colortree Group factory in Virginia. Colortree had been unceremoniously shut down in June 2019 when employees showed up on a Monday morning to find chains and locks across the doors. This sudden closure was an abrupt about-face from the optimistic picture painted in 2017 when management acquired the company from PE firm Boathouse Capital. Boathouse had originally backed management in 2011 in a roll-up strategy, starting with the combination of two Virginia direct mail printing companies, Colortree and Graphic Innovations. The roll-up strategy apparently stalled after the 2013 acquisition of Direct Impressions, another Virginia-based direct mail printer. Boathouse bailed out before the ship sank and sold the company back to the original management. The departure of Colortree left a gap in the market, as the company had significant expertise in printing and converting specialty envelopes often used in the non-profit solicitations business. Moore’s resurrection of the factory included a commitment to prioritize the hiring back of the former Colortree employees with their envelope production expertise.

Swimming further upstream into the creative realm of direct mail, in January 2021, Moore rebranded its agency division as Edge Direct. Based in Baltimore, Maryland, Edge Direct is a registered professional fundraising consultancy, dedicated to help nonprofits raise maximum funds and brand awareness in support of their mission. However, Edge Direct goes way beyond print, stating that its “multichannel approach is based on a passion for creating campaigns that combine right brain/left brain marketing tactics.” Communication media utilized includes television, radio, print, digital and social media channels, and of course, direct mail.

Returning to the mundane world of print and mail, Moore announced the acquisition of Tri-State Envelope in December 2021. Along with the prior restart of the Colortree plant, and the acquisition of the Worcester Envelope Company in Massachusetts, this deal solidified Moore’s ability to provide its other operations with envelopes in its increasingly vertically integrated operation; prescient moves in advance of the very tight market for envelopes that developed in 2022.

Moore has completed other acquisitions along the way in its journey from direct mail company in Oklahoma to fundraising and marketing powerhouse circling the nation’s capital. Those deals include data analytics, TV production and other supportive service companies. Through a combination of opportunistic acquisitions, adroit resurrections of failed operations, and a clear-eyed strategic focus on its core market, Moore has created a comprehensive position in the nonprofit segment of the direct mail industry. The company now claims a total of 38 locations nationwide that produced and mailed 1.9 billion pieces of mail last year, sent out 4 billion emails, and attained 20 billion TV views of its campaigns. No longer content to be called a direct mail company, Moore now calls itself “a leading constituent experience management company” – the latest term of art in the nonprofit fundraising business. Since that tagline phrase does not exactly roll off one’s tongue, Moore is now otherwise known as a CXM company.

With its concentration of direct mail firepower concentrated on the D.C. region, anchored by its original core Midwest Oklahoma-based operations, might we expect that at some point the longer postal delivery standards will require Moore to shift its acquisition focus westward?

Other mail-centric printing companies have felt the pressure and pull to expand their footprint, specifically aimed at bridging the major postal service regions. Since the post office cannot deliver faster, the industry is responding, using M&A strategies to meet their customers’ need for speed. *

Earlier this year, in April, St. Cloud, Minnesota-based Nahan acquired the mail division assets of the short-lived roll-up Intellus in Montgomeryville, Pennsylvania. Nahan was clear in its reasoning for the acquisition, stating “The purchase allows Nahan to strategically expand its geographic footprint and complement its existing Minnesota facility with enhanced printing, mailing, distribution, and logistics capabilities that enable faster speed to market.” Nahan, while not as large as Moore, has also expanded its portfolio of services to include strategy, creative, data, analytics, print production, mailing, logistics and fulfillment services.

Direct Marketing Solutions (DMS), a portfolio company of Main Street Capital, acquired Mailing Services of Pittsburgh (MSP) back in January of 2022. We suspect that the CEO of DMS had the degraded postal standards clearly in mind when he announced the deal with the statement "This is a transformative time for our team but more importantly for our clients, who will benefit firsthand from the dynamic coast-to-coast reach that will enable us to deliver agile marketing campaigns to prospects days faster." In what now sounds like an echo chamber in the direct mail industry, DMS “leverages world-class strategic, data/analytics and creative insights to execute high-performing integrated direct mail and digital direct solutions.”

One year ago this week, Postal Center International (PCI), based in southern Florida, announced it was opening a new direct mail production facility in San Antonio, Texas. No stranger to acquisitions, PCI eschewed the M&A path in this instance and instead leased an empty 100,000 square-foot facility which it will outfit with equipment, systems and staff to mirror its Florida operation. The company explicitly announced that the San Antonio site was just the beginning of an expansion of regional office, production, and presort sites in regions around the country. PCI made good on this promise in September with another lease and build-out of a production facility in Franklin, Massachusetts aimed at serving the northeast region.

Effectively, the US Postal Service has changed its standards to meet the reality of its failure to meet past standards. The result of this, along with increasing costs, will be that time-sensitive communications will continue to migrate to electronic media. However, direct mail providers believe that, at least for the foreseeable future, their marketing customers with less time-critical communications, such as credit card solicitations, mortgage offers, insurance pitches, as well as non-profit fundraising campaigns, will continue to pour huge volumes into the US mail system. Direct mail providers with the scale and wherewithal to do so are mitigating the increased time in the mail stream by producing mail in different zones, offering their customers improved time to response. 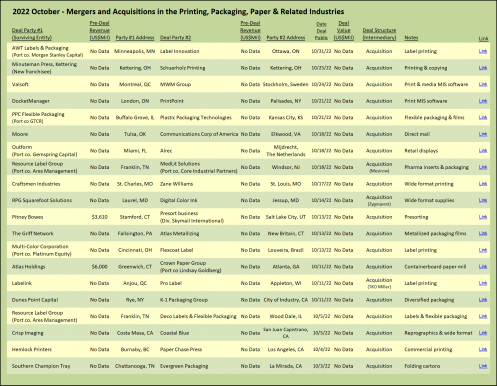 * Graphic Arts Advisors, publisher of The Target Report, currently represents buyers seeking direct mail and transactional printing companies in the western US, in response to the market dynamics discussed herein.