Target Report: Moving Pieces Around on the Private Equity Chessboard 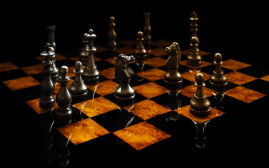 Where does a private equity company go to sell a printing or packaging company when the time comes to exit the investment and return funds to its investors? The large public firms executing national roll-up strategies (CGX, RRD, Cenveo, etc.) have left the game, and companies in the printing, packaging and related industries are increasingly being passed from one fund to another in what are known as "secondary buyouts."

A secondary buyout does not necessarily portend a negative outcome, as the acquiring fund may have a different strategy or unique skill set that builds additional value in the portfolio company before the eventual sale to a strategic buyer or yet another private equity firm. The first private equity fund/owner may have reached the limit of its buying capacity, exhausted its available equity or simply ran out of time to increase the value of the acquired company through internal improvements or further acquisitions. The acquiring fund may be larger, more able to finance additional bolt-ons, or simply starts the timeclock over again. Alternatively, the second fund/owner may not have predetermined exit schedules; rather the fund may be patient and manage the company for cash dividends and long-term value creation.

Wellspring Capital created flexible packaging powerhouse ProAmpac with its acquisition of Ampac and Prolamina in 2015 (see The Target Report — August 2015). Wellspring quickly added a bolt-on to its new platform company with the acquisition of Coating Excellence International last December. The Wellspring team was apparently on track to complete additional acquisitions when the Pritzker brothers, both billionaires, came knocking. Scions of the Hyatt Hotels fortune, the brothers had lost out to Wellspring in the original bidding for Ampac which subsequently led to the formation of ProAmpac. In September, the Pritzkers re-entered the game and through their own fund, Pritzker Group Private Capital, have acquired the now much larger ProAmpac. In what must have been two very busy days, the brothers made their next move just one day later, acquiring the Vitex Packaging Group, a flexible packaging company, from another fund, Kirkland Capital.

The Pritzker fund is not a traditional fund that raises capital from others; the Pritzkers invest their own capital, hence the fund is free from the outside pressure exerted by investors that force timed exits from portfolio companies. While we expect that more acquisitions by ProAmpac, supported by its new owners, will be forthcoming, it appears that ProAmpac itself is likely off the market for the foreseeable future.

Capital Partners, a private equity fund based in Norwalk, Conn., acquired label, flexible packaging and folding carton manufacturer Outlook Group from Milestone Partners, a private equity fund in Radnor, Pa. Milestone acquired Outlook Group ten years ago, a long time for an investment in the private equity world where typical holding periods are usually five years, seven years on the outside. Regardless of the reason for the long hold, the time had finally come for Milestone to exit and Capital Partners provided the secondary buyout, which was completed through its existing portfolio company, M&Q Packaging, a Pennsylvania-based producer of specialty high-temperature resistant plastic packaging solutions.

What follows is a summary of secondary buyouts in the printing, packaging and related industries during 2015 and the first 10 months of 2016 (see corresponding Target Reports for more info and links to sources): 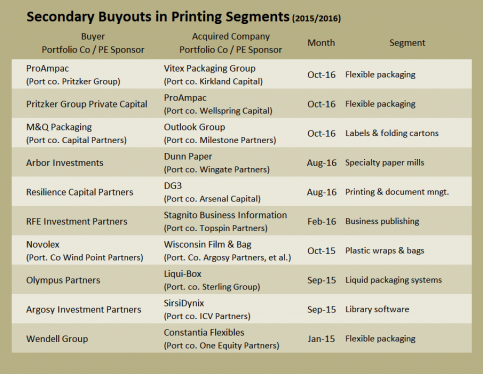 Commercial Printing — Print Management
Transactional activity picked up a bit in the commercial printing segment in October, however unfortunately several announcements were of closures and one bankruptcy filing. Despite the increase, we see no reason to ring alarms bells. When compared to the activity we reported in the first Target Reports, back in 2011 and 2012, these negative indicators are still far fewer and may just be indicative of marginal operations that finally came to their natural end (see the online deal logs below for details).

On a more positive note, Target Print & Mail in Tallahassee, Fla., continued its evolution from a college-town copy shop to full-service commercial print shop with the acquisition of Modern Mailers, also of Tallahassee. Print-Tech, a commercial printer in Ann Arbor, Mich., tucked-in the business and selected employees from First Impression Printing, also of Ann Arbor. The sellers are retiring.

Maestro Media Print Solutions, a specialized technology-driven print management firm in Bloomfield Hills, Mich., has merged with IBS Direct, a direct response and marketing services company with powerful printing capabilities. Based in King of Prussia, Pa., IBS Direct has announced that both firms will continue to operate in their current locations, expanding both companies’ geographic and operational footprints. *

Notably, the IBS Direct merger with Maestro was the second transaction in as many months in which a broadly-defined marketing solutions provider acquired a print management firm. In August, Hibbert Group announced the acquisition of the California-based RedShark Group. In each case, the companies added strong customer relationships, support technology and geographic diversity via a transaction with an outsourced procurement service company. **

* Graphic Arts Advisors, publisher of The Target Report, served as advisors to Maestro Media Print Solutions in this transaction.

** Graphic Arts Advisors, publisher of The Target Report, served as advisors to The RedShark Group in this transaction.

What follows below is a list of Mergers and Acquisitions, Bankruptcy Filings and Non-Bankruptcy Closures in the Printing, Packaging, Paper and Related Industries. Visit www.thetargetreport.com and scroll down to view these charts that also includes links to specific press releases. 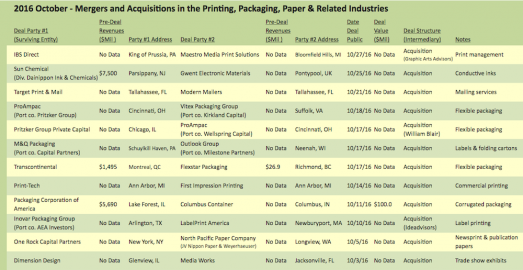