LED-UV’s future is bright, especially as it makes inroads into packaging applications, where special effects and print enhancements are the norm. 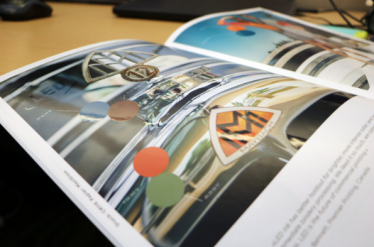 Pictured is an LED-UV cured print sample, from AMS Spectral UV, using reticulation to set off spot-gloss areas on an image for a luxurious feel.

As we head into Spring 2018, one can finally see that LED-UV inks have matured in the market, and it’s time to start focusing on what can be done in terms of print enhancements with LED modules due to the expanded availability of high-quality LED inks and coatings. Printers with modules stationed in end-of-press positions frequently ask about coatings and special effects, and what can be achieved with LED technology.

The original two problems with LED-UV coatings were yellowing and lower gloss levels than one obtained with conventional UV; but both of these issues have been addressed and fixed by ink and coating manufacturers, and are no longer a concern to printers using LED curing.

The basis of doing print enhancement effects is first having a gloss LED-UV coating with dependable cure and consistent gloss levels. Of course, we all know that when you trap coating over wet inks there is going to be some dive-in of the coatings, which in turn lowers the gloss level. Having two modules and multiple mounting locations is going to give you better results with the curing process, even if you only want to coat.

When it comes to doing effects like strike-thru and reticulation, having an interdeck curing position is a must if you want to achieve the best results at speed. Even though we have seen these effects produced with just LED-UV in the delivery, slower press speeds are expected and required to maximize such effects with this setup.

Strike-thru is the most popular special effect requested by customers, and most printers have been producing it with aqueous coating for years. The process is basically the same with LED, with the contrast (gloss/dull) happening as a chemical reaction between the varnish and the coating. With LED-UV, you are now curing the ink before the varnish unit, and applying LED-UV gloss coating over the top.

Here are some of the benefits of using LED instead of the aqueous method:

Reticulation is another popular effect now being created with LED-UV. The process is the same as strike thru, except it uses a reticulating varnish. Working with your coating and varnish vendor is important to get the results you’re trying to achieve with this effect.

Print enhancements, like pearlescence and motion coating, are still only available for conventional UV applications. As the number of LED-UV presses continues to grow, 2018 should see ever-ongoing development of the coatings traditionally found in the conventional UV market, but for the LED market. The future of LED-UV is bright, especially as it makes inroads into packaging applications, where special effects are the norm.

As I tell everyone: be patient, take care of your equipment, and test, test, test.

Allen Jenkins serves as executive director of the International LED UV Association. For more information, visit www.leduv.org or email him directly at allenjenkins@me.com