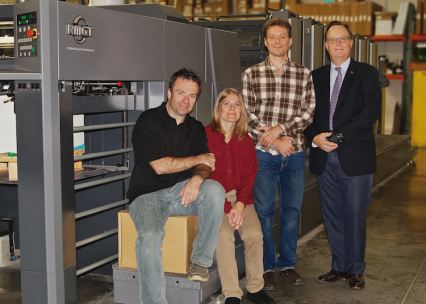 The staff at Special Editions stands next to the company's 9 Series Press from RMGT.

SOLON, Ohio — December 1, 2016 — Graphic Systems North America (GSNA), the Authorized Distributor for RMGT sheetfed offset presses in North America, announced that Special Editions has successfully installed a new, five-color RMGT 9 Series offset press, with coater and a full suite of the leading drying and curing technology. Special Editions was established in 1993 and is a full-service commercial printer who has expanded into high value-added print to further expand its reach and scope. The company, which employs 15 full-time workers, and features a full bindery, including diecutting capabilities, takes pride in producing the highest quality for their very demanding client base. Like many commercial printers, roughly 25% of the company’s turnover comes from digital print while the balance is produced using the offset process.

"We were in need of more offset print capacity, as we were up to our elbows in work," notes Brandon Esser, president of Special Editions. However, adding 1,500 to 2,000 sq. ft. to accommodate a 40" press proved cost-prohibitive. Instead, Esser and his management team opted for the eight-up press that had a much smaller footprint.

"We were intrigued by the size of the RMGT 9 Series press. Getting an eight-up sheet without having to go with a full 40" press was appealing," Esser says. The more affordable price of the 9 Series made adding the "big three" of curing and drying technology to the press possible. "We are saving time and labor," he explains, "because RMGT automation and 9’s compact footprint allows single pressman operation with incredible productivity."

Economics is a major factor in why such a high percentage of Special Editions work is still printed offset. “We consider our RMGT 9 Series to be a 36" 'digital press' — that’s how efficient it is with short runs. Most of our [press] runs are between 2,500 and 10,000 sheets."

Over the past seven months since adding the RMGT 9 Series press, Special Editions states that 80% of its work is now running on the press. The new machine replaced an older, five-color, 23x29" RYOBI 750 model and another five-color, 28" sheetfed press from another manufacturer. Overall volume in the shop is up while labor and waste have been cut significantly as both LED-UV instant curing and RMGT Insta.Color technology are paying off for Special Editions.

"We haven’t had an in-house sales representative for five years," adds Esser, whose firm works with brokers as well as directly with other printers. "We are bidding on and picking up jobs we wouldn’t have otherwise gotten. We do Hi Cure UV for specialty finishes and coating now." Projects including Chemical Embossing and High Gloss UV are now offered by Special Editions. “One of the very first jobs we completed was a Chemically Embossed booklet cover that gave the 3D effect of leaf veins for a seed catalog. Our customer loved the job.” With LED-UV ink curing and Hi Cure UV coating curing special effects printing is quick and easy on the RMGT 9.

"What Special Editions has done is amazing," points out Derek Gordon, Midwest Regional Manager for Graphco, the Midwest distributor for RMGT. “They have joined a growing number of commercial printers who are leveraging LED UV inks to create production efficiencies and producing high-quality products.” This 9 Series press provides the triple threat of RMGT’s G3 LED-UV curing after the last printing station and then either aqueous or UV coatings with almost instant changeover. It handles eight-up printing with the same footprint and manning of the six-up offset press that Special Editions replaced and features a maximum printing speed of 16,200 sheets per hour, producing offset quality at digital quantities.

Gordon continues, "We are thrilled to see how well our friends at Special Edition are doing with their new press."

About Graphic Systems North America (GSNA)
GSNA delivers exclusive access to the RMGT line of offset presses for commercial, packaging and in-plant printers in the U.S. and Canada. It It also provides immediate technical support and parts fulfillment. Formed in July 2013 with co-headquarters in four U.S. states and in Canada, the GSNA group has more than $60 million in revenue and constitutes the single largest offset press sales and service team in North America.