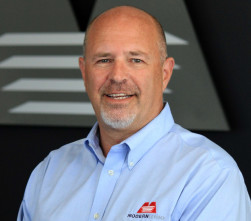 Under Bray’s leadership, Modern Litho-St. Louis, a division of Modern Litho-Print Co., has grown in every measure of the word in revenue, employees, facility space and significant expansion of product and service offerings to its customers. This growth is a result of both organic customer attraction/retention and strategic acquisitions of several St. Louis Metro based printing companies including Midtown Printing (2013), Trio Printing (2018) and Mulligan Printing (2020).

“We’re proud of the leadership and dedication Skip has shown within our company and the industry. He exemplifies our company values, cares deeply about his employees and his community and inspires those around him,” commented Darrell Moore, President/CEO of Modern Litho-Print Co.

As a fifth-generation printing industry veteran, Bray began working at the French Bray Printing Company in Baltimore, MD at the age of 16. After moving to the St. Louis area to be closer to family, he continued his printing career in sales and transitioned into management at Midtown Printing, which was acquired by Modern Litho in 2013. He was appointed as General Manager in 2016. He currently serves as the President of Print Media Association – St. Louis, an organization he has been a part of for many years.

END_OF_DOCUMENT_TOKEN_TO_BE_REPLACED
Happening Today
The Powerful Case for US Book Manufacturing