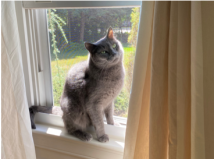 This is Mycroft … one of my two Russian blue cats (the other being his brother, Sherlock). Mycroft is a small, thin rascal. When Allison and I got married, the boys were part of the package. However … 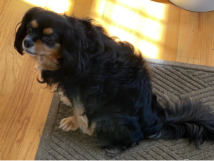 This is Fergie. Fergie was the family dog well before I got here. He is a yippie little thing who barks at real and imaginary noises.

Eager to establish who was boss, Fergie chased the boys every time he saw them. This went on for several months, if not the first year. But that all changed the day Mycroft decided he’d had enough.

Not once, but twice Fergie found himself on the wrong end of Mycroft’s claws. The barking, the chasing, and the bullying stopped. Today, Fergie approaches Mycroft with a great deal of respect.

It occurred to me this morning what a perfect metaphor this is to describe that bully customer. I often work with: new franchise owners. So anxious are they to fill their coffers with anything, they put up with everything. Inevitably, there is that one customer who is demanding and ungrateful. He pays late and speaks rudely.

In short, he barks and chases.

But a funny thing happens once my clients find some success. Suddenly, they’re not as desperate for business and one day they decide enough is enough and they push back on that rude client. The funny thing is, a funny thing happens. Instead of initiating a fight, the bully backs down. Instead of following through on his threat to “Take my business elsewhere,” he becomes a model customer — polite and appreciative.

What my customers don’t understand is, they had this power along. Had they held their ground and not caved, this relationship would have changed a lot earlier.

Clients have the right to be demanding. They can even choose to be rude. However, you have rights and choices, too. As soon as you are ready to assert yourself, things will change … for the better!

Bill’s sales training is not cheap, just effective and guaranteed. Contact Bill Farquharson through his website, BillFarquharson.com or 781-934-7036.

How Do You Think? An Idea for Thinking BIG