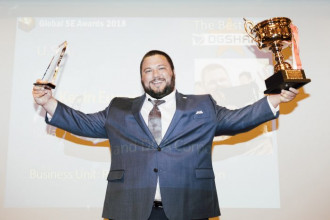 Irvine, Calif. – May 23, 2018 – Roland DG Corporation has announced the winners of its Global SE Awards 2018 competition. The event, which took place April 23-25 at Roland DG headquarters in Hamamatsu, Japan, tested the product knowledge and technical skills of top Service Engineers – 28 finalists from around the world that won regional contests within their respective territories. This year’s competition pitted finalists against each other in two categories: Inkjet Printers, and the new 3D Devices category which included dental milling machines.

The winner in the Inkjet Printer category was Mark Johnson from New Zealand representing Aarque Group Ltd., while Kevin Rosen, a Roland DGA lead technical support specialist from the United States, was named champion in the 3D/Dental Devices category.

“This was my first time traveling outside of the U.S., and I’m incredibly honored to win this kind of competition on a global scale,” says Rosen. “The tests and challenges were intense, but I received plenty of support from my colleagues. It was an experience that I’ll never forget.”

This year was Roland DG’s third Global SE Awards competition to date, with similar contests held in 2013 and 2015.  In addition to recognizing the abilities of service engineers both regionally and globally, the competition helps motivate the SEs to further improve their skills and raise the standards of Roland DG Care – the company’s comprehensive customer service and support program.

According to Ron Ball, senior director of service at Irvine, Calif.-based Roland DGA, a total of 778 SEs took part in this year’s SE Awards competition – the highest participation rate ever. “With so many skilled technicians participating, simply making it to the finals is an incredible feat,” notes Ball. “Earning a coveted ‘World Champion’ title, like Roland DGA’s very own Kevin Rosen did, is that much more impressive. We’re extremely proud of Kevin and what he has achieved.”

The first day of the competition consisted of a written exam that tested the finalists’ knowledge related to hardware, parts, software and other aspects of product repair and maintenance. A hands-on exam, held on the second day, challenged the ability of each competitor to successfully resolve specific product issues – some of which they may have never encountered previously – within a limited time period.  In addition to being tested on their technical skills, the SEs were assessed on how actively they shared their personal experiences and know-how with other SEs, as well as how frequently they used Roland’s online learning platform.

The Global SE Awards represent Roland DG’s commitment to industry-leading customer service, which includes providing SEs with opportunities to enhance their skills, as well as increasing the effectiveness of the company’s online knowledge base.

At the Global SE Awards closing ceremony, Roland DG President Hidenori Fujioka congratulated the champions, and all of the participants, on their achievements. “The extensive product knowledge and outstanding technical skills of our SEs are crucial to developing and maintaining strong, positive customer relationships” said Fujioka. “All of us at Roland DG appreciate and respect your efforts.”

Below is a listing of the Roland DG Global SE Awards 2018 winners, as well as the second-place and third-place finishers in each category: