While the novelty of 3D printing is slowly fading, and the idea that something – anything – is 3D printed is its most important attribute, the process remains largely untapped by those serving retail, events, and corporate graphics segments. And while the ability to print in three dimensions is amazing, especially for large-format applications, 3D printing is not a “magic thing maker.” In reality, the printer makes a shape. The intended result, the thing, still requires finishing. This does not mean, however, that 3D is not a great opportunity for some. Like other technologies, it represents an option to work in three dimensions. 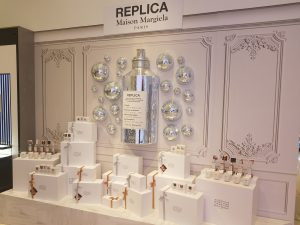 his large, 3D-printed perfume bottle is the highlight of a display for Maison Margiela. Produced by First Displays | Credit: Massivit 3D

Asked how 3D printing is most used today, Josh Hope, senior manager, digital imaging and innovation at Mimaki USA, says a great deal of prototyping is done with the technology. He adds that it is not uncommon for a 3D-printed mock-up of an actual product to be used as an early sample release. “The idea,” he says, “is to put something in someone’s hand so they have an object to interact with.” Hope adds that a growing number of “for sale” retail products are 3D printed, particularly footwear and eyeglass frames.

Kevin Sykes, president, North America, for Massivit 3D Printing Technologies, Ltd., says he’s seeing a wide range of 3D-printed applications for retail. “The most common are large mock-ups or designs of something that represents their brand.” Examples of this can include a large perfume bottle, a giant shoe, or a creative theme around a specific campaign. Sykes mentioned a recent display for Coca-Cola that included Santa Claus on a train. He added that 3D can also be used to produce stands or container displays – a novel replacement for what are currently corrugated-based applications.
Outside of the retail space, Sykes says, the large-format 3D printing technologies available from Massivit

3D are used not only for prototyping, but also within manufacturing settings. He adds that the technology is currently being used in the production of automotive parts, tub and shower enclosures, and recreational vehicles.

The machines have also been used for museum displays and in educational institutions – replicas of people, elements for STEM-related displays, and dinosaurs. “The only limitation is their imagination,” Sykes says. “If they can come up with an idea, we can generally come up with something that represents it.”
In one case, 3D technology is being used to facilitate the printing of 2D graphics. Hope says that a desktop 3D printer offered by Mimaki can be used to create custom jigs to be used on flatbed printers. These jigs allow for holding unusual shapes in place, for instance, baseball bats; or to facilitate printing “many-up” on a flatbed, such as with baseballs.

According to Hope, most 3D printers used in the graphics production or retail spaces use either PLA (polylactic acid) plastic or a photopolymer. While many printers on the market are FDM (fused deposition modeling) printers, where a filament of plastic is “fused” at the printing site, other systems use a photopolymer gel, which hardens instantly when exposed to intense UV light.

Sykes says one advantage of UV gel is that the “build” is ready for finishing immediately after printing concludes.

Just as large 2D printed graphic can be “tiled” together to create a piece larger than the capabilities of the printing device (think, for instance, a building wrap), larger builds can be segmented, then assembled using either glue, UV-curable gel, or through the printing of interlocking edges. This last option is favorable for larger builds that need to be taken down and reassembled, such as for seasonal or event applications. According to Sykes, segmented builds of 25 feet tall are not uncommon. The tallest he’s seen is 38 feet tall. He says 3D printers with a larger print area require fewer individual parts for the larger build, which brings faster production.

As mentioned previously, most output from 3D printers must be finished. Most emerge fully white, or another singular color.

Hope says that in many cases, finishing the product is done either by painting, or through a vinyl wrap. This, it is important to note, is where digital “hands-off” shape building gives way to work by a skilled pair of hands.

Sykes says that for some applications where wrapping is the finishing method, the surface may need to be filled to eliminate the subtle stratifications between printed layers. He adds this can be achieved through slight sanding, or with a sprayable, self-leveling product. If painting is the finishing choice, Sykes says that freelance artists, particularly those who are skilled in the use of an airbrush, are a logical resource. “A lot of customers will go to an auto-body shop,” he says. Any automotive paint, he adds, will have great adhesion.
For graceful access to the 3D printing space, Sykes recommends hiring someone who is well-versed in 3D design. “You need to have that capability,” he says, noting that in some cases, the designer is also the machine operator.

Hope says that the basic skills gained by using small, less complex 3D units are the same skills required to operate larger machines. “Once you get comfortable with the additive manufacturing world, you can make the right decisions to move forward.”

The production of 3D objects is not new. In fact, the humanoid figurine known as the Venus of Willendorf, one of the oldest known works or art, was produced between 22,000 and 24,000 years ago. When 3D craft became 3D art, it was named sculpture. What is different about 3D printing is that it is a digital process, but it’s not the only one. Before 3D printing came to the fore, Hope says, most digitally-produced work in that space was done using a 3D milling unit and polyethylene or polyurethane foam – which is a subtractive process (meaning material is being taken away), as opposed to 3D, which is an additive process (where material is added).

Today, the choice between CNC/foam technology is a matter of cost and level of detail. While Hope says 3D is currently taking a percentage of that space, the milling units, which operate on up to six axes for milling, can’t achieve the high level of detail 3D printing can bring. “The cost,” Sykes says, “depends on the project and the complexity.” He says milling is currently the best choice for applications requiring minimal detail. Asked whether 3D printing technology has reached a tipping point where it will become the predominant technology for this type of work, Hope says, “Right now, things are still in favor of robotic arm milling technologies, but that is tipping for sure.”

For the past several years, Mimaki has been offering a full-color 3D printer capable of producing 10 million colors and includes a clear gel for the creation of translucent effects. Hope says that while the company envisioned the unit would be used in the signage market, it has been surprised (and pleased) to see it being used extensively as an add-on for the computer gaming industry. “For instance,” says Hope, “if you’re playing a Star Trek game online, for which you’ve designed your own spaceship, you can print a 3D model of your ship right from the game.”

And this is not a one-off business, he adds. One company serving this market is currently running a fleet of 15 of Mimaki’s larger scale (20"x20"x12") color printers.

Hope has also seen use of the technology for pre-surgical training, and even for the creation of exact copies of historical or cultural artifacts, preserving their look, feel, and dimensions as insurance against destruction or plunder.

Sykes says Massivit 3D is seeing opportunity in the gaming space as well – work that complements its large-format print size (maximum is 57"x44"x70"). “People want to produce five-foot versions of 3" pieces,” he says.

One application using Mimaki’s full-color 3D printer is by a U.S.-based company called Biologic Models, which produces complex, colorful models that can be used by researchers and others to better understand, for instance, viruses. One model, depicting the SARS-CoV-2 virion, is a complex depiction of the world-changing microscopic virus, available in sizes up to 24 centimeters.

As 3D printing has continued to grow into existing and new spaces, it is forging a path of its own, offering new ways to do some things, as well as the ability to do new things. Whether your company accesses this opportunity or not, its effect will be profound moving forward.

Is the Opportunity of 3D Printing For You?
Comments
COVID-19 Resource Channel