Rising Star Alex Fechner Says to Stay Ahead of Technology to Thrive, Not Just Survive 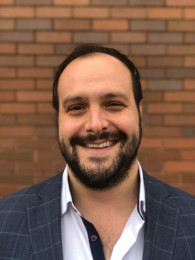 In 1923, Alex Fechner’s grandfather founded the letterpress shop that would eventually evolve into The Advertisers Printing Co. At the time, he notes, nearly all of the business came from a single client, producing electronic conduit circular labels. The business continued to grow, with first his grandfather, and then his father and uncle, taking over and evolving the business to its current focus on high-end projects and being positioned as a “boutique” print shop.

But Fechner’s path didn’t lead directly to his family’s business. He notes that both of his siblings found careers outside of the graphic arts industry, but he hadn’t really found a direction for his own life as he started college. “My dad had a candid conversation with me when I was around 20, and said that since none of us kids were interested in getting into the business, he would eventually sell it. We had been in business for more than 80 years — so I realized it would be crazy not to continue the legacy and try to help grow it into the next century. So I thought. ‘I’ll take a shot,’ and started to learn how the process works.”

While he had grown up in and around the business, this is the point, Fechner, now 34, says, where he got serious about it. He started in estimating, and moved into customer service soon thereafter. He spent time as a night foreman in the press department, where he had to okay every press sheet at night. He started to learn about digital, and was the driving force for Advertisers’ entry into digital printing, as well as the department’s first production person.

“I was very involved in the process of investing in that equipment, and launching that new department from scratch,” he notes. From there, he went into operations, and learned more about the business from that direction, joining peer groups focused on those, like him, who were set to take over a family business, and how to reinvigorate and reinvent it for the future. “Now I have a solid 10-year vision,” he says, “and all the steps on how to get there.”

Looking to Buy a Wide-Format Provider

He recently stepped into yet another role in his family business — business development, which includes managing both the customer service team as well as the salesforce. In that role, he says, one of his first goals is to acquire a wide-format company within the next five years, which in turn will help him reach a goal of being a $15 million revenue business with a 20% margin. He also sees the company evolving away from being a “printer.”

“Direct mail is one of our main products,” Fechner notes, “specializing in omnichannel marketing campaigns with direct mail as a critical component. We can connect direct mail to seven other mediums, and provide a dashboard on how the entire campaign is going, the leads it’s generating, the clicks it’s getting, etc. And at the end, we sit down with the client and come up with a strategy to get the highest ROI on the direct mail follow-up to tie it all back in.

“I don’t necessarily want to be a printer anymore. I want to be a marketing services provider, a strategic company helping businesses achieve their goals — with print as one of many of our services.”

Beyond wide-format and marketing services, promotional products is another major growth area in Fechner’s plan for the future. He believes that providing an all-encompassing communications experience for both clients and end users is the future of this industry.

“It’s all ‘doom and gloom’ in this industry, and it shouldn’t be,” according to Fechner. “With all of the technology, and all the things you can produce, the possibilities are endless. If you’re staying ahead of technology, you won’t just survive — you’ll thrive. You can really change as a company and thus become more valuable to your customers.”

That philosophy is turning his family’s business — which once relied on a single customer for more than 80% of its business — into a multimillion-dollar marketing firm with a broad range of services and customers that cross multiple verticals and state lines. It is a transformation that many commercial print shops have considered, but Fechner is proving can be achieved with enthusiasm, hard work, and a love of what this industry is truly capable of achieving.