Rex Three Is Thriving, Not Just Surviving, During Pandemic

Even as many printers continue to experience the negative economic effects of the COVID-19 pandemic, Rex Three, a 65-year-old family-owned business in Davie, Fla., has grown. It hasn’t just grown a little bit. It has grown a lot, nearly doubling its revenue since the shelter-in-place orders began.

As other printers have furloughed employees and shuttered their doors, Rex Three is on track to hire more than 100 employees and add more warehouse space to keep up. “We are busting at the seams,” Todd Jones, director of IT, prepress, and customer support, says. “Our parking lot has been full since the virus hit.”

What’s the secret? Instead of trying to hunker down and wait out the storm, Rex Three decided to innovate. Under the leadership of Julius Miller, who founded the company (and who, at 99 years old, still comes to work every day); his son Stephen Miller, CEO; and Howard Shusterman, COO; the company started preparing long before most people knew how severe the impact of the virus would be.

Shusterman recalls a conference call he had with a client. “We won’t shut down on you,” Shusterman noted. “We’ll keep the machines running. We’ll keep the work flowing. Unless the government makes everyone stay at home, we’ll still get your jobs out.” 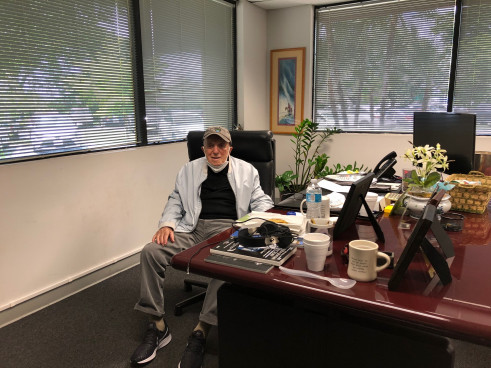 At 99 years old, Julius Miller — owner and founder of the 65-year-old family business — still continues to come into the office on a daily basis.

This would be a massive undertaking, and sorting out the prepress requirements fell to Todd Jones, a 38-year industry expert hired in 2015 to spearhead the company’s front-end workflow development. “I knew we had to treat this like a hurricane,” Jones recalls. “We had to be prepared to do everything from home.”

To build the kind of workflow that would be necessary, Jones knew Rex Three would need a lot of power and speed, especially since one of its competitive differentiators is developing custom workflows. The company operates 47 servers, multiple proprietary workflows, and outputs to one of several presses,
including the Heidelberg Speedmaster XL 106, and HP Indigo 12000 and 7900 digital presses.

“We have lots of customized programs that lock us into certain customers and, for some of those clients, we may have more than a dozen workflows,” Jones says. “We needed to be able to do everything — print anything, at any time, off any server, and go to any press.”

For several of Rex Three’s largest customers, a fully automated workflow was already in place. Now this level of automation needed to be extended to all of their clients, even those with the most complex requirements.

The Need for Speed

It also required taking full advantage of the capabilities of Rex Three’s HYBRID software, which enables disparate elements of the workflow to talk to one another. “In this sense, HYBRID acts like the trunk of a tree,” Jones explains, “sending work from any server to any device.”

Most vendors offer a one-way connection, Jones points out, but that wouldn’t have worked for Rex Three. “It wouldn’t have been enough for us,” he says. “A job might be coming from any of our nearly 50 servers.”

This level of automation is infrastructure-heavy, so Jones also needed to make major upgrades to its Internet and server infrastructure, and increase its bandwidth more than 250%. He also upgraded the company’s hardware from regular HD servers to SSD servers, and added more RAM.

Rex Three made another big move. It took its servers from outside locations and moved them in-house, as well as maintaining offsite disaster recovery with redundancies. “This created a lot more speed, with greater integrity,” according to Jones.

Once this workflow was up and running, Rex Three employees were able to transition to working remotely.

COVID-19 Pandemic and Beyond

This does not exhaust the innovations developed by Rex Three employees who have been critical to the COVID-19 response.

For example, Fatima Harami, VDS manager, and Dan Nall, systems architect, created a job bagless workflow that would allow jobs to move from department to department with minimal human intervention.

Jay Kahn, VP of manufacturing, established stations with procedures to enhance faster packing and shipping of the company’s 200,000+ orders per week. Kahn also supervised the manufacturing process alongside Greg Calahan, bindery supervisor. Together with Erick Rose, pressroom manager, they were able to make all of their daily shipments on time.

“We fulfill everything from pharmaceuticals and marketing packages, to energy drinks,” Kahn says. “We have portable tables spread out all over the building. Plus, we’ve rented warehouse space from one of our clients. Our business keeps growing, and the team keeps making things happen.”

To keep things disinfected, Rex Three has four employees who continually clean and disinfect throughout the building on all shifts. “Our building smells like alcohol mist,” Jones says.

As a result of these and many other efforts, Rex Three has been able to keep (and exceed) its promises. “Pandemic or not, our customers have to hit their street dates,” Shusterman stresses. “We didn’t want to let them down, and we haven’t.”

Even if the Florida government were to shut everything down, Shusterman adds, Rex Three developed strategic alliances with 14 other manufacturing plants across the continental U.S., enabling its customers to remain operational for all of its services regardless of what happens in the state.

Rex Three’s tenacity and willingness to think outside the box started long before the pandemic. Just take its installation of the HP Indigo 12000. The company purchased the press in October 2019 before there was somewhere to put it (and long before anyone could have seen the pandemic coming). Rex Three had started the design and permitting process to expand its digital pressroom, but the press was set to arrive in December 2019, along with 30 skids of paper.

Jones and his team were undaunted. They worked with one of Rex Three’s clients to rent an unused warehouse until a room could be built. “We brought in generators, temporary water, and electric lines and, in two days, we produced a perfect sheet off the new 12000,” Jones recalls.

Why was Jones insistent on the HP Indigo 12000? He got to know HP digital press technology while running prepress at a print shop in Nashville. “I’ve known HP for a long time,” he says. “I started testing the HP 12000 because it had a different technology than I’d ever seen. We already had HP 7900 and HP 7600 digital presses but, when I saw the HP 12000, it was a game-changer. Not just because of the format, but because of the range of stocks on which it could print.” 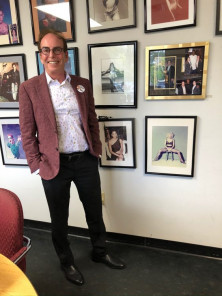 Many of Rex Three’s clients print on a wide variety of stocks, such as stream and rainbow foils, and other synthetics. One customer recently added printing on canvas. “We are always doing R&D,” Jones says.

The HP Indigo 12000 replaced the smaller format HP 7600. Now, the press has become central to Rex Three’s ability to maintain high capacity and efficient workflows. Without the large-format size, Rex Three would not have been able to take on all of the additional work that has come its way since the pandemic began. “It’s a 20.75x29.5˝ press that will allow a larger imposition on the sheet,” Jones explains. “Without that, it would have been very difficult to meet all of the demands.”

Getting It Done, Even During Worst of Times

Although Rex Three has nearly doubled in size, this isn’t what is most exciting to the leadership. It’s the ability to keep everyone employed, and even add staff during a really difficult time.

“We all have to work together, whether in-house or remotely,” Jones notes. “Our employees have done everything I’ve asked of them and more. They are truly angels and
warriors. They are not just great employees — they are great family members.”

Many of the upgrades to the company’s workflow and processes will have benefits far beyond the pandemic. In particular, the company’s leading-edge workflow automation has not only been critical for protecting employees during the pandemic, but will greatly improve Rex Three’s competitive positioning and profitability in a post-COVID world.

“As a company, Rex Three will never be the same again,” Jones admits. “We have all grown in our approach to challenges that arise, our daily internal workflow, and our vision for the future. Plus, we have learned a lot about ourselves. Everyone came together as a team to succeed.”

As a result, Jones’ message to the rest of the printing industry is one of hope. “Even during the worst times, we can find a way to overcome and get it done,” he concludes. “Here at Rex Three, we utilized the resources we already had, and strategized and executed a way to build on them.

“Now, as I like to say, whether Disney World is open or closed, our digital world is open 24/7."