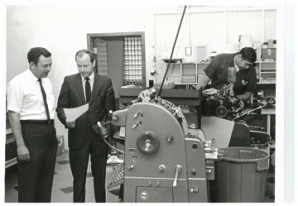 The industry lost a printing franchise pioneer during the Christmas holidays with the passing of Bill Gravley. And though the man is gone, his legacy continues.

In 1956, Mr. Gravley and his wife, Clara, started a printing business out of the garage of their small home in Wichita, Kan. Within a few years, they’d done enough business to move into a storefront locale and renamed themselves Quality Printing. As the 1960s rolled in, Mr. Gravley wanted to take advantage of the trend toward making the printing process considerably faster. He wanted to become a quick printer.

Actually, make it a Quik Printer. Mr. Gravley began that downtown business in 1963, according to his granddaughter, Amy.

“Bill’s foresight allowed him to see and act on a need that was not yet being met — a foresight that would allow him to revolutionize the print industry,” she says. “His vision was clear: lightning-fast turnaround times, without sacrificing quality or customer service. His mission statement was to ‘provide the finest service for every customer, every time,’ a saying that can still be found framed in Quik Print locations across the country today.”

The network eventually grew to 200 locations across the United States, Amy Gravley notes. Though the organization is no longer franchised, there are still 40 U.S. stores operating under the Quik Print umbrella. All six of the Gravleys’ children moved to different cities to start their own Quik Print operations, including facilities doing business as DocuMart and Print Pointe.

“Our large family all works together to not only help each other grow our respected businesses, but to continue to grow and honor our grandfather’s legacy as well,” she adds.

Another example of the family influence continuing to maintain relevance in the printing landscape, from modest garage operations to national chains, and everything in-between. PI