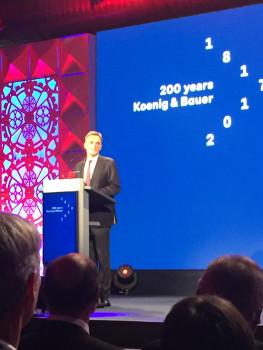 As the oldest printing press manufacturer in the world, Koenig & Bauer (formerly KBA) held a special celebration Sept. 20-21st in its headquarters city of Würzburg, Germany, to honor its 200th anniversary. In conjunction with an international press conference to mark the historic milestone, the celebration culminated at the local Vogel Convention Center on Sept. 21st with a gala reception attended by nearly 700 guests and a special program featuring dignitary speakers such as Horst Köhler, the former president of Germany, and Axel Hentrie, CEO of Bertelsmann Printing Group, among several other presenters. 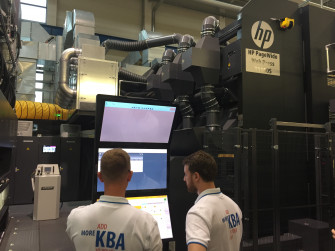 Guests and the large contingent of trade press journalists also had the opportunity to tour the Würzburg manufacturing complex, demo center and headquarters as part of the festivities. On display were various production facilities; a new demo center that is currently being assembled to showcase digital and flexographic printing, including a RotaJET inkjet web press, an EVO series flexo printing press for flexible packaging and the new CorruCUT rotary diecutter for corrugated products. They also toured a museum of early press models from the 1800s and saw current printing presses in production and at various stages of manufacturing.

A circular motion press from 1868 printed an engraving of the company's birthplace, the monastery Oberzel; a Super Orloff Intaglio III press printed a specimen banknote; a Genius 52UV from KBA-NotaSys printed a security document; a RotaJET L digital web press printed, among other products, an oversized poster of the Würzburg-born NBA star Dirk Nowitzki; and the world's largest inkjet press, the HP T1100S, which is manufactured for HP by Koenig & Bauer, digitally printed 9-ft.-wide liners for corrugated board.

During an international press conference the opening day, Koenig & Bauer Chairman and CEO Claus Bolza-Schünemann described several company milestones in the last 200 years. He made particular mention of the acquisitions made during the past 25 years, which have turned the company into a leading player in package printing; previously, the company's main focus had been on media-oriented markets such as newspaper, book, magazine and catalog printing. 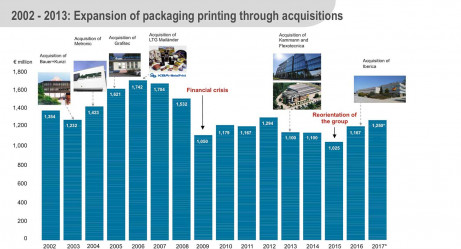 Koenig & Bauer has shifted its emphasis to the packaging market through M&A deals, which has helped to stabilize its annual revenue stream.

He also remained bullish about the future of print, despite the impact of electronic substitutes. "From morning to evening, we meet printed products that were produced on Koenig & Bauer presses: from the directly printed perfume bottle in the bathroom in the morning, the newspaper at the breakfast table, banknotes, credit cards and a wide range of packaging when going shopping, to books or magazines in the evening," said Bolza-Schünemann. "The best thing about this is that most of these print products cannot be replaced by online media or computer screens, and the demand is continuing to rise. This makes us optimistic for our future."

With the introduction of a holding structure and a clear focus by the operating companies on their respective market segments, Koenig & Bauer largely completed a comprehensive reorientation in 2015. And, thanks to its strong position in special markets such as the packaging and security/banknote printing sectors, in 2016 Koenig & Bauer achieved the best results in its long history, with an EBIT of 87.1 million euro.

Growth in Packaging and Industrial Printing

Koenig & Bauer CFO Mathias Dähn presented corporate goals and strategies during the press conference. "After a decade of declining sales, growth has become the central pillar of our corporate strategy. All business units should contribute to this and work profitably," he said, in reference to the 33 subsidiaries that now comprise the company. The goal for its 2017 anniversary year is to achieve a group turnover of approximately 1.25 billion euro and an EBIT margin of around 6%.

In view of the growth of the world economy, the world population, online commerce and the number of single-person households, Dähn sees particular opportunities in the packaging sector. Already the market leader in the printing of cardboard, metal and glass, Koenig & Bauer wants to improve its market share further in flexible packaging printing, corrugated board printing, and the marking and coding sector. New products such as the VariJet 106 digital hybrid folding carton press (jointly developed with Xerox) featured at drupa 2016, as well as digital, flexo and offset presses for corrugated board, metal sheets and beverage cans, are expected to contribute to this. Strong interest has been shown in the new CS MetalCan solution for printing two-piece beverage cans and the first MetalDecojet metal decorating digital press has been sold. The acquisition of Kammann in 2013 has also enabled an 80% market share in the direct decoration of premium glass containers for cosmetics, perfumes and spirits.

A further example of the expansion strategy into the packaging market is the purchase of the Spanish diecutter manufacturer Iberica in July 2016. Dähn also described the cooperation with HP in digital inkjet printing for the corrugated board segment as being successful and very future-oriented. And Bolza-Schünemann announced the order of the first digital CorruJET sheetfed press for corrugated board from a German customer.

Due to the drop in demand for new web offset presses for newspaper and commercial printing applications, the company plans to expand its services to cover older presses. The service turnover generated for existing sheetfed and web presses has grown significantly and is expected to rise to 30% of group turnover.

Commemorative Publication in the Jubilee Box

A specially printed and constructed jubilee box features three publications that pay tribute to the company's past and future.

In recognition of the company's 200th anniversary, Koenig & Bauer also presented a special commemorative publication entitled "People - Machines - Ideas". It comprises three separate printed products, all housed inside an elaborate jubilee box. A small-format hardcover book "People" tells the history of influential people at Koenig & Bauer during the past two centuries, from the company founders until the present. "Machines" is a collection of 13 richly illustrated posters printed on both sides showing printing presses from Koenig & Bauer from 1814 until today. The magazine "Ideas" presents countless facts, figures and thoughts about the future of the industry. 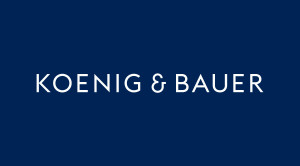 The rebranding includes a new logo.

Bolza-Schünemann also announced a name change and rebranding as the company embarks on its third century. The  KBA brand, which was introduced in 1990 after the takeover of Albert-Frankenthal AG, will revert to the original brand of Koenig & Bauer, albeit with a completely new look for the logo and product design. The ampersand between the surnames of the founders of the company was chosen as the short form of the brand name Koenig & Bauer, designed in the new company font, for promotional activities, stickers, drawings, spare parts, etc. 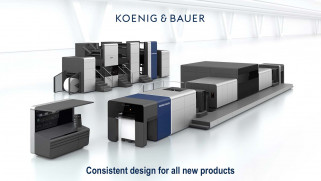 The new product design is intended to make the quality, performance and user orientation of the presses and systems supplied by the companies in the Koenig & Bauer Group more visible and consistent. The traditional company color blue becomes warmer and more accentuated, while its use is reduced. It harmonizes with the new dark and light shades of grey. Added to this is a contemporary interface design, which the company believes will be more attractive to "digital natives." The new design will be implemented immediately for new products, and successively up until drupa 2020 for all other product families within the Koenig & Bauer Group.