If anybody’s going to put me out of business, it had better be me.” These words go a long way towards encapsulating Stephen Zenger, CEO of Zenger Group, and a 2021 Printing Impressions/RIT Printing Industry Hall of Fame inductee. In his years at the helm of Zenger Group, Zenger’s strategic mind and eye for the next crucial technology has played a significant role in taking the business from strength to even greater strength over the past few decades.

Founded by his father and brother as a local storefront print shop in Buffalo, N.Y., in 1980, the family-owned commercial printing enterprise now boasts a nationwide customer base and currently operates three plants in the Buffalo area. They include a main direct mail printing operation running digital and offset presses and a full bindery; a union print shop that also operates offset, and small-format digital output devices, and an embedded bindery; plus a third operation, a retail copy shop in downtown Buffalo.

Zenger is the second youngest of seven siblings, two of whom, Joseph and John, are Stephen’s co-owners in the business, with another two brothers, David and Thomas, also working at Zenger Group. For many, this may be a hair-raising prospect — how does one balance running a growing and adapting printing concern while navigating the viewpoints and sensibilities of relatives? Far from an additional challenge, Zenger views it as one of the company’s great strengths, with each family member bringing an essential element to the smooth and successful running of the business.

“I come from a family of seven children,” Zenger explains. “Through all these years, we’ve always had a nice division of labor in the family. In the business partnership, I have a brother who’s a finance and numbers guy, I have a brother who’s a relationship and plant guy, and I was always the technology and strategy piece of the pie. That combination has served us well.”

Joseph Zenger, Zenger Group’s CFO and Steve Zenger’s brother, agrees that a harmonious relationship between the siblings has played a significant part in the success of the business over the years, but credits Steve’s diplomacy skills as a key factor. 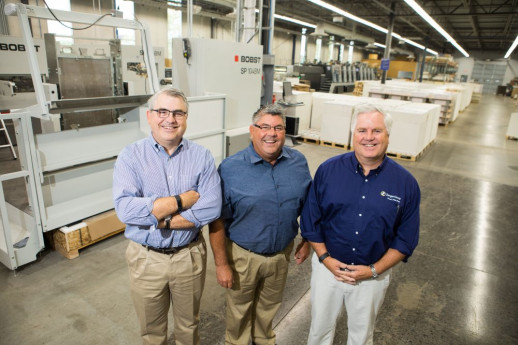 From the left, brothers and co-owners Stephen, Joe, and John Zenger stand
together at Zenger Group’s Tonawanda, N.Y., primary plant and headquarters.

“With a large family and many of us working in the business, our dynamic is being able to all work together and do it successfully. Stephen has the right kind of personality to help make that happen. My father chose him as CEO because of his personality; he has a very engaging personality and a very even-headed demeanor. Imagine how hard it is with even one or two siblings in the business, when you have five or six like we have, it’s even harder to mesh all those personalities together and make everybody’s needs work. Steve has been a big part of that.”

John Zenger, VP of sales at Zenger Group, agrees: “We’re very fortunate that we all get along! Stephen is technically advanced, and likes the newest and latest things, which keeps our company strong on the technology front. I don’t have his technical skills, and if he has challenges in the areas that I deal with, he comes to me.”

Zenger’s mediation skills aren’t just recognized within the family. According to Jerry Hace, a longtime colleague and friend of Zenger’s who’s now retired from the printing industry, “Steve is great at achieving consensus. I’m sure that can be difficult in a family business with several siblings. They stay focused on technology trends and customer demands, and he has the ability to implement new technologies seamlessly. As an entrepreneur, he has a special ability to see and use technology, and he implements it to meet customers’ needs, especially in an emerging digital world.”

Zenger’s affinity for technology has been important to Zenger Group’s growth and continued prosperity. ‘Smart. Print. Now.’ is more than a tagline, it’s embedded in the company culture. “We’ve always pushed to be at the leading edge of print production technologies,” Zenger explains. “With ‘Smart. Print. Now.’, smart is probably the most important part. It’s about doing innovative things with technology, and sometimes stretching us into work that isn’t necessarily what would be considered printing industry work. 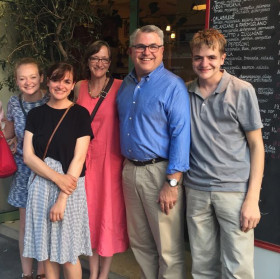 The Zenger family visited Paris in 2017. Standing, from left, are daughters Mary and Lily; wife Julie; Stephen; and son Jackson.

“Sometimes it’s database work, sometimes it’s cloud computing, sometimes it’s security; it can be a number of different things, and that is what has set us apart and made us so successful over the years,” he adds. “The company has grown from those two employees in 1980 and that one, small retail shop to where we are today — 130 employees working in 140,000 sq. ft. of production spaces — largely because of that kind of focus on technology and innovation.”

Tim Freeman, president of Printing Industries Alliance, caught sight of this particular trait early on. “I’ve always considered Steve as a visionary in the industry,” Freeman says. “Some of the things I’ve seen him do with the company have been very astute. He has a keen understanding of technology.” Freeman and Zenger’s relationship goes back to when Zenger graduated from college, as the family business was a member of the association.

Freeman sums up the innovative mindset that has served the Zengers so well with a fitting anecdote: “Here’s one of the stories that I tell about Steve (and have told so many times he’ll probably be mad if he sees it in print again!): When he graduated from college, his company was one of the first companies in that area to adopt desktop publishing using Apple computers. We had a group of older, more established offset printing firms, somewhere around the late 1980s, and I remember going to meetings with these guys, and they just couldn’t believe that somebody would actually think they could set type on a computer. They were scoffing about quality and saying, ‘how could this ever impact our businesses?’ Those companies are out of business now, and Steve has built his company into one of the largest printers in the country.”

Of course, fresh from graduating from college in 1987, Zenger was fairly incognizant of the sea-change occurring in the industry at that time. Far from seeming ground-breaking, it was all he knew.

“If you look at what was happening in that timeframe, there was an utter revolution happening in the industry,” Zenger reflects. “You were converting the production processes, particularly in prepress, from photo typesetting, mechanical art production, cameras, and so on, to digital desktop electronic publishing technologies. But for a kid coming out of college in 1987, there was nothing unnatural about it.”

The realization that technological change is inevitable has delivered some valuable lessons that has added courage and confidence to Zenger’s innate aptitude for technology and strategy. Zenger continues: “If there’s a technology that scares me or that puzzles me, it’s a flag for me to pay attention. That belief has served me well over the years.”

That philosophy has paid dividends, and is in accordance with Zenger’s previously referenced mantra, ‘if anybody is going to put me out of business, it had better be me’. He provides a timely example: “A couple of years ago, we installed two very state-of-the-art Konica Minolta KM-1 inkjet presses. They have significantly impacted our conventional offset printing demand. So we’ve got conventional Heidelberg presses and digital inkjet presses, and in some cases we’re eating our own young. If anybody’s going to put me out of business, it better be me, because if this inkjet technology supplants a half-size, conventional offset press, either I’m going to do that and have control over it, or somebody else will do it to me.” 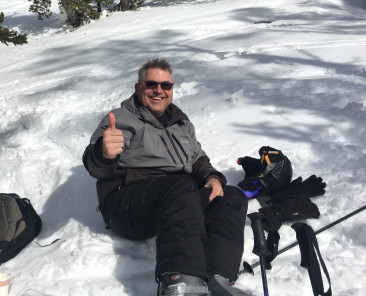 Steve Zenger takes a break on the slopes in Lake Tahoe.

Recognizing the Value of Involvement

More than 30 years on from graduating college, and now with a thriving, multiple production facility printing enterprise to lead, how does Zenger keep his finger on the pulse of the industry? “It’s very valuable to just maintain strong relationships with the vendor community, the people who design and make this equipment,” Zenger says.

“Trade association relationships have also been very valuable to our team over the years because you see what’s coming down the pike and, again, if it scares you, you keep looking deeper. Attending trade shows, reading trade magazines, talking to vendors, talking to industry colleagues — that is how we get our insights.”

Zenger is without doubt an immense advocate for associations and supporting the work they do for the industry. He has served as a longtime board member and former chairman of the Printing Industries Alliance (PIA), the New York regional affiliate of the Printing Industries of America (now part of PRINTING United Alliance). Freeman reflects on Zenger’s commitment to paying it forward: “As competitive as the industry is, he’s always been very open to sharing operational and other ideas that a lot of companies probably wouldn’t have shared.”

Joseph Zenger echoes this characterization of his brother, adding: “Steve has spent a lot of time working for the benefit of the industry as a whole. He has been very active in associations both on the state, as well as national levels. Printing has become a completely different business in the past 20 years, so it’s a testament to people like Steve who try to help others companies navigate.”

“We’re all very proud of him,” John Zenger agrees. “He’s contributed his time and knowledge to the betterment of the entire industry. That’s the way our company works; we want other businesses, including our competitors, to thrive as well.”

Hace also attests to Zenger’s magnanimous nature: “He’s just a good guy. That’s the best way to put it. He’s very community minded. Steve gives back his time and resources to not only the printing industry, but to local chambers, business associations, charities, schools, you name it. He has worked in Washington, working on local challenges, which takes a great deal of time, so he’s good for the community and good for the industry.”

Outside of his working life, Zenger describes himself as “a lucky guy as husband to my wonderful wife, Julie,” and is the proud father of three children, Lily, Mary, and Jackson, all in their 20s. The family loves to travel, enjoying a 2017 European excursion, described by Zenger as ‘the trip of a lifetime.’

An experienced skier, the Zengers’ vacation home in Ellicottville, N.Y., is a frequent weekend destination for him to partake in some downhill skiing, enjoy the cabin, and even make time for some gardening: “I even go in the summer to mow the lawn and tend to the land. I find doing that kind of work to be cathartic, just to forget about the hectic day or week that it’s been!”

Karis Copp is a U.K.-based journalist and communications specialist. With a background as a writer and editor in the print industry, she writes about print and technology news and trends, reports on industry events, and works with businesses to help them tell their stories and connect with their customers. Follow her on Twitter @KarisCoppMedia.