PRINT 17: What to Expect at This Year's Trade Show in the Windy City

PRINT 17 isn’t exactly the same as past editions of the show, but it’s still the go-to event for printers who need answers to their quest for profitable, business-building ideas and new market opportunities..

You really should go.

If you own a printing business, the questions most responsible for keeping you awake at night probably are, “How do I grow my business?” or “Where do I take it from here?” Attending PRINT 17 (Sept. 10-14) won’t necessarily give you the entire answer. But, no other event can open your eyes to as many possibilities.

That’s the essence of the registration pitch being made for PRINT 17 by NPES, the printing equipment manufacturers’ trade association that now owns 100% of the PRINT and GRAPH EXPO shows. It’s a fair and reasonable proposition. Behind it lies the reality that, just as the printing industry has changed, so has its principal trade exposition.

PRINT 17 has long been regarded as the primary venue for evaluating printing and graphic products and technologies. However, according to Thayer Long, president of NPES, this year’s PRINT 17 promises to grow beyond a high-energy exhibition into an entirely new experience. 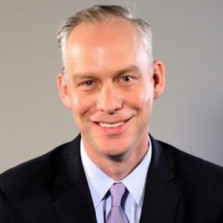 “We’re rethinking and reimagining our shows,” salys Long. Now the primary objective for PRINT 17 and future exhibitions is to “build up the community” where printers, brand owners and other representatives of the print supply chain can help and learn from each other.

“We are that home for the printing community here in North America,” Long adds. He’s counting on “new, purposeful interactions” among attendees to point the way to growth and to make PRINT 17 a success on its own terms.

The PRINT shows occur once every four years, with the smaller, annual GRAPH EXPO events filling in the off-year gaps. PRINT 17 won’t be the same kind of show as PRINT 13, because it can’t be — too much has happened to the role of graphic arts trade shows and to the perceptions and expectations that exhibitors and attendees have of them.

For one thing, the events have had to adjust to a major change in the kinds of technology that they exist to showcase.

Marco Boer, VP of IT Strategies, says that many of the most important developments nowadays are taking place on the software side. The claim is borne out by Hal Hinderliter, coordinator of the Must See ’ems Awards competition, who notes that management systems, consisting purely of software products, received the second highest number of entries among 11 judging categories this year.

What this means for an event like PRINT, says Boer, is that it needs less physical space for equipment, but more room in the agenda for applications, best practices and the other elements of the “learning show” that attendees now want it to be. Adapting to this has been “a huge change for exhibitors,” according to Boer.

This year, points out Barb Pellow, group director of InfoTrends/Keypoint Intelligence, PRINT 17 exhibitors have to be ready for “more educated trade show participants” who will have done their homework before setting foot in the South Hall of Chicago’s McCormick Place convention center.

According to Amy Machado, an analyst at IDC Research, today’s showgoers get a lot of their information from taking part in vendor-supported user group conferences and from visiting the manufacturers’ “customer experience centers” — resources with which the NPES and other related trade shows increasingly have to compete against for attention and attendance.

With its return to MCormick Place in Chicago after a one year stint in Orlando, expectations remain high by organizers that PRINT 17 will be deemed a success by all measures.

Long notes that attendees will rate and value PRINT 17 not just on the basis of how many square feet it occupies or how many booths it contains, but also on how much new business-growth intelligence they head home with afterwards. The key to delivering that information will be a revamped educational program featuring shorter sessions, more user panel discussions and a schedule that makes it simpler for attendees to divide their time between the meeting rooms and the show floor.

“People come to a trade show to learn,” stresses Steven Schnoll of Schnoll Media Consulting, who was engaged by NPES to reorganize the program. “That’s why we’re giving education a very important place in the whole thought process of the show.”

But, people still also come to trade shows to look at what new technologies the suppliers have to offer. PRINT 17 attendees will find a substantial number of them: 437 as of this writing, a figure that Long describes as being close to “where we now want to be” in terms of exhibitor participation. He also notes that about 25% of them are first-time exhibitors and that a few of the high-profile vendors that had dropped out of recent shows have returned.

It’s evidence, according to Long, of Chicago’s perennial appeal as a trade-show center and its reputation as a place where business gets done. The City of Chicago, he says, has taken steps to make McCormick Place an easier and a less costly place for trade show exhibitors. For PRINT 17, NPES will also help by offering exhibitors what Long calls “significant relief” for machinery drayage and freight — the costs associated with transporting equipment and other display items to and from the show floor.

NPES will cover 100% of these charges for all PRINT 17 exhibitors. That relief, Long points out, will continue beyond this year. He credits the benefit with encouraging at least one exhibitor to fill its stand with more equipment than originally planned.

No one has a surer sense of the technical pulse of PRINT 17 than Hinderliter, who, along with his judges, gets an advance look at a number of exhibitors’ newest wares in the form of their Must See ’ems entries. Hinderliter is also the organizer of OUTLOOK 17, an opening-day conference that reviews key topics and trends for the printing industry.

He predicts that this year, the exhibitors will be speaking less about “faster-wider” devices and more about the new product applications that their solutions enable printers to venture into: for example, corrugated containers and POP, plastic cards, textiles, and ceramics. There’ll be more emphasis on finishing, as well as heightened interest in “print to box” workflows for one-pass, in-line production all the way from printing to shipping.

Something else to keep an eye on, according to Boer, is how closely the exhibits conform to what he describes as the industry’s shift from a high-volume, low-value production model to a lower-volume approach that creates higher value in the finished piece.

Pellow says that she’ll be looking for affordable options in cut-sheet inkjet printing as well as solutions that can help printers create and sell value-added services in the omnichannel environment in which they now operate. 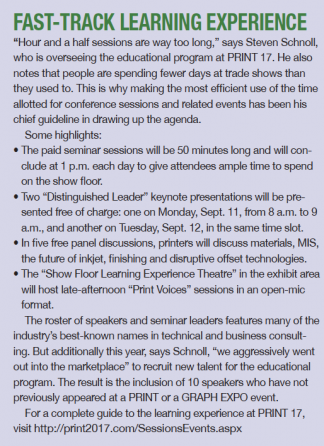 Machado will be keeping tabs on how far the vendors have come in fully commercializing products that they announced at drupa 2016 and, in some cases, at drupa 2012. She’s also interested in tracking the partnerships that various manufacturers have formed to optimize the performance of their equipment.

Like Pellow, Machado thinks that a good way to tackle a show floor is to start at the periphery and work your way inward. She says that the small booths on the pipe-and-drape outskirts often have as much, if not more, to offer than the big stands occupying “the giant, carpeted spaces” in the middle.

Although PRINT 17 and GRAPH EXPO differ in size, purpose and participation from earlier editions of the shows, they share their predecessors’ rootedness in the Windy City. Last year, in what now looks to have been a one-time detour, GRAPH EXPO relocated to Orlando in response to requests for a friendlier set of dates and a less expensive show destination. But, no more moves of that kind appear to be on the near horizon.

“We are committed to Chicago, at least for 2019,” Long says, looking ahead to the next edition of GRAPH EXPO at McCormick Place. The PRINT 17 website also indicates Chicago as the location of GRAPH EXPO 19. But, there could be further announcements about where future shows will be held, according to Long.

What won’t change is the yearly cycle of the shows. “The printing community needs an annual event,” says Long. “Printers tell us that the shows are still key to their planning for capital investment and necessary gathering places to learn about new technologies and solutions.”

That’s why he’s urging PRINT 17 attendees to come to Chicago with a plan for exploring the new show floor and a willingness to interact with other attendees. This is where “industry alignment” and business opportunities come from, he notes.

Boer has three recommendations for those who want to get the most from their PRINT 17 experience:

Hinderliter says he’s surprised that more people don’t take advantage of the OUTLOOK conference, a four-hour symposium held in the morning the first day before the show floor opens. OUTLOOK raises the curtain, he adds, by highlighting trends that shape demand for the solutions that the show is presenting.

This year’s program will feature a full rundown of the 2017 Must See ’ems winners; an industry economic update; and sessions on business opportunities such as custom publishing. Also included will be a tribute to the late William Lamparter, the originator of the Must See ’ems and a much-honored industry expert and advocate.

“Don’t just go and wander the booths,” urges Pellow. “Make it a purposeful event for you.” That attitude, along with plenty of hydration and a pair of comfortable shoes, will make time spent at PRINT 17 an investment that pays off.