A recent event held at Pioneer Press, in Greeley, Colorado, featured the company’s new 8-color RMGT 9 Series LED-UV perfecting press – a significant upgrade for the dynamic company. A mix of customers and other printing professionals attended the event, which was an opportunity to witness the benefits of fully-modernized offset print production. In addition to exemplary printing, the new press will bring production flexibility, the benefits of automation, and quicker turns.

The Benefits of Technology 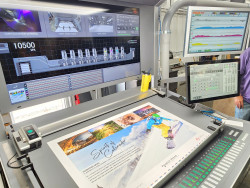 The RMGT press provides a high level of control, including on-press camera systems.

According to Kian Hemmen, western regional sales manager, print and finishing solutions for RMGT, the labor savings on these fully automated presses, by themselves, bring great benefits. “All but one of our installs of this line of presses are running with only one operator,” he says. Time-saving elements of the new press include auto feeding and ejecting of plates and an on-press camera system that reads every impression, and institutes needed adjustments every 10 impressions. Further, he says, an 8-color makeready takes about 50% less time to do. 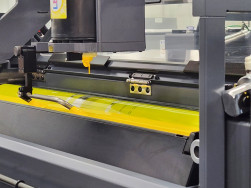 Another quality-focused and cost-saving element of the new press is the installation of Ink Sentinel systems by Pamarco. The systems ensure a measured, consistent flow of ink to the press, and remove the burden of inking the press from the operator, allowing them more time to focus on quality.

Because of the mix of automated features on the new press, Hemmen says, possible up-time on the press is between 92-94%, and run lengths as small as 150 pieces are profitable.

Chris SoRelle, owner of Pioneer Press, pointed out at the event that the press had been in place for just about a month. The company’s primary motivation for purchasing the new press, he says, “was for more output. We were at capacity with what we had. We removed a press and put in the RMGT. We expect to triple output from the same floorspace.” 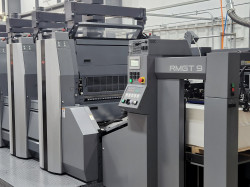 Another strong benefit of the new press, says Bob Shoemeate, VP of operations, is the instantaneous drying and low energy use of LED-UV curing. “It answers the requests we get for environmentally-focused printing.” Because of the instant dry of LED-UV, he says, “the print goes straight to bindery. As the new press operator ran posters on Yupo non-absorbent synthetic paper, Shoemate echoed SoRelle’s expectations for improved productivity: he expects a 300% increase in productivity.

Increased production flexibility and efficiency are at the forefront for Rudy DeSouza, VP of sales and business development. He highlighted how the LED-UV curing enables printing on a wider variety of substrates: plastics, synthetics, recycled and uncoated stocks. The benefits of press automation bring shorter makeready, not just in time, but also in paper use. “On conventional jobs, printing on both sides, we used to use 800 sheets in makeready,” he says. “That’s now 100 sheets, and we’d rather use those sheets for jobs, not for make-ready.”

The new press, DeSouza says, is also an investment in the future: “We have a strong responsibility to our customers and employees to stay competitive in a competitive industry. We were hoping for immediate benefits from the new press, and the results have met our expectations.”