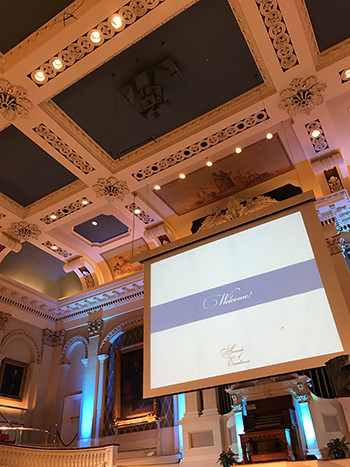 On the evening of April 6, 2017, the Printing Industries of New England (PINE) celebrated a decade of excellence during its annual Industry Awards Gala. This year the event, held at the historic Mechanics Hall in downtown Worcester, Mass., was the perfect backdrop for these distinguished awards.

According to PINE, the Industry Awards Gala started 10 years ago as a way to present the winners of the association’s print competition with their awards, combined with a vendor display showcase and networking opportunity. Over the years, the Awards of Excellence competition has continued to evolve — from the number of submissions, the number of participating companies and the quality of that work. “I am greatly humbled and honored to receive PINE’s Industry Influencer Award,” said Gecht. “I would like to offer my sincerest gratitude to PINE’s council for this recognition and to our entire EFI staff for their commitment to the journey of revolutionizing the future of printing through on-demand, breakthrough digital technologies. This trek [or expedition] was not done alone. The wonderful people of this creative industry have been the real force behind this exciting road to reinventing print.”

Previous recipients of the Industry Influencer Award include: