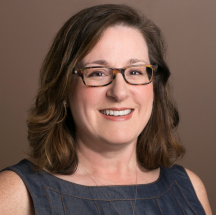 SOUTHBOROUGH, Mass. - December 8, 2017 - The board of directors of Printing Industries of New England (PINE) has announced that Christine A. Hagopian will be the first woman president of the 130-year-old management association. The decision was made by the leaders at their quarterly Board meeting this week.

Hagopian has been with the association since 2006, joining the staff as the director of programs. With the sudden resignation of Tad Parker, in September, the board asked Hagopian to fill the role as interim president, and she has been providing services and support to the membership.

As the new president, Hagopian has planned an aggressive agenda of meeting with members, association partners and prospective members to build PINE’s presence in New England. When asked how she will lead the association, Hagopian indicated that she will get out and meet more of the membership, learn how PINE can help them be more successful, and make New England aware that PINE is an invaluable resource for the graphic communications industry.

In her former position as director of programs, Hagopian launched the Awards of Excellence print competition. Over the last ten years, the competition has grown in participation and has given PINE members an excellent marketing opportunity.

Nationally, Hagopian has been active with the education directors from affiliates of the Printing Industries of America (PIA). Regionally, she has volunteered on various committees of the New England Society of Association Executives (NESAE). She has served as a trustee of her church’s parish council committee.

Hagopian came to PINE from Unisource, where she was a specification sales representative. Her background in printing began as a production manager for two tabloid magazines for Cahners Publishing/Reed Elsevier.