Path to Profitability With Production Inkjet 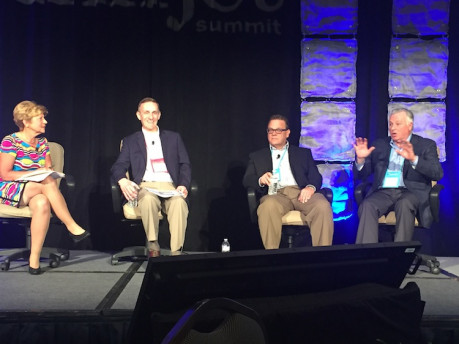 By the year 2020, 60% of all digital printing volume will be produced on production inkjet devices. Barb Pellow, of InfoTrends, made this statement during the recent Inkjet Summit, just before she launched into a panel discussion with a trio of inkjet users about their path to profitability with inkjet.

One driver of this trend, Pellow said, is the increasing availability of cutsheet inkjet presses.

“It’s making it more affordable for a much broader audience to deliver those high-quality digital color pages,” she remarked.

But for the three printers on Pellow's panel, rollfed inkjet was the key to their success.

The first, Ken Shanovich, director of operations with Liturgical Publications, said that his company has replaced 27 web offset presses at its six production facilities with five inkjet presses, and is not looking back. The company specializes in printing church bulletins — to the tune of 28 million pages per week.

The main reason Liturgical Publications moved to inkjet, Shanovich said, was for the paper savings. Makeready waste was excessive with offset.

“We were throwing out at least 50% of the paper we bought,” he revealed. With inkjet, that’s down to just 2%, he contended.

The company spent a year and a half on research and due diligence before adding its first inkjet press in October 2014. Shanovich and his staff anguished over wither to integrate finishing with the presses, but ultimately decided on near-line finishing, which he hailed as “absolutely the way to go.” Now, printed rolls can be distributed over several bindery lines, for faster turnarounds.

Shanovich admitted that training offset operators on inkjet was not easy, and staff size took a huge hit after so many web offset presses were eliminated. But staff and paper waste reductions both increased the company’s profitability, he noted. Quality has also improved dramatically, he said, since registration issues had always plagued the offset process.

A second panelist, who is Print Services director at a large insurance company, described how his company’s strategy to consolidate its two in-plants led to the decision to add two rollfed monochrome inkjet presses, to replace seven continuous-feed toner printers. He praised the increased uptime that inkjet technology has brought.

The in-plant was able to continue using its existing finishing equipment, which was a major cost savings. He said stakeholders have been very pleased with the improved qualify of the printing and the lower costs. Paper expenses alone, he said, dropped between 4-10%. He said he was surprised, during testing, to find that untreated papers performed well on press and finished well. Customers, he added, are anxious for his in-plant to add color inkjet.

“They know that it’s going to improve the customer experience,” he said.

The third speaker, Don McKenzie, is president and chief growth officer for a marketing agency called Innovairre, which helps nonprofits raise money. He discussed in detail the crucial role data plays in creating relevant, targeted direct mail campaigns to potential donors. Inkjet printing has enabled the company to use that data more effectively.

The biggest struggle, McKenzie said, was convincing clients to stop obsessing over the differences between offset and inkjet quality, and understand how inkjet allows them to target their communications better. Instead of sending all donors the same form, for example, with donation options of $10, $20 or $50, “the $50 donor should be communicated to differently,” he said, with options of $50, $100 and $150. Inkjet allows these targeted versions to be created easily.

SCREEN Americas to Relocate its Headquarters