As Benjamin Franklin once said, “time is money.” For commercial printers expanding their operations with digital printing presses, it can be a huge growth opportunity with new jobs, new applications, and new markets opened up. But for those who forget that the finishing part of the equation needs to be considered right alongside the new press, bottlenecks can cripple efficiency, leading to lost time — and lost money.

The postpress equipment the shop is already running likely won’t be a perfect fit for finishing the work coming off digital presses. Shorter runs, with multiple configurations, mean that equipment designed to be set up once and then left to run for thousands of pieces simply won’t be effective. Instead, shops that want to get serious about their digital printing workflows need finishing equipment designed to keep up with ever-changing work coming off those presses.

That said, there are a few things to keep in mind when it comes to deciding what finishing equipment to pair with digital presses — and it’s not just about the manufacturer or format size. The first piece of advice Truman Pope, director of lettershop operations for Carol Stream, Illinois-based American Litho, has for those adding digital presses to their lineup is that, “it’s not a one-to-one ratio.” The speed of the presses, and the variety of work they can produce, means that the work is being printed faster than a single piece of finishing equipment can keep up. 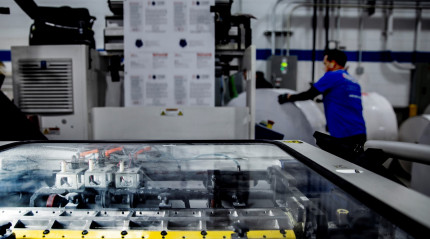 American Litho, which runs several high-speed HP inkjet web presses, including a PageWide T240 and PageWide T250, quickly realized that it needed two digital [finishing] lines to process the work coming off one HP press line. That way, the folding lines keep up with the press, which doesn’t have to shut down while waiting for the machines to be ready for the next job. “With the first HP press installation, we got one [digital finishing] line and one press, but we had so many rolls on the floor it was crazy. We ended up buying the second finishing line to get rid of that bottleneck.”

In fact, according to Pope, that decision to add a second machine — his facility houses a variety of MBO finishing equipment, including a DPS-60 dynamic perf and score unit — was made about a week after the initial installation. In order to get the productivity and efficiency gains promised by digital printing, they knew would need to have the proper finishing equipment to handle it as well.

Mike Evers, the director of operations for Jacksonville, Florida-based TC Delivers, notes that for his shop, it was a less obvious bottleneck that led to the investment of digital finishing gear — the need to outsource the finishing work. “Many times, a job requires perfing or scoring,” he notes, “and to be competitive in the marketplace, we need to do it in-house or miss the opportunity. I didn’t want a great opportunity to come across my desk, get excited, and then realize I can’t do the job because it requires perfing.”

TC Delivers recently installed a Konica Minolta KM-1e sheetfed color inkjet press, and paired it with a Rollem TR system to bring that finishing in-house. He notes that when they first began looking into inkjet presses, “I knew even before we decided [which one to purchase] that we would also need some postpress finishing, and we would want to have perfing and scoring capabilities in-house,” he says. “We had tried some perfing in-line with our folding equipment, but didn’t have a lot of success with that. This gives us a lot more control over the quality.”

Increased automation was the key for Starline, based in Albuquerque, New Mexico, according to Bill Lang, company president. His shop is running a variety of digital presses, including an HP Indigo 12000, and has paired them with a range of finishing options from Standard Finishing Systems, including stitching, folding, and binding. The Standard Horizon CRF-362 creaser/folder, in particular, has “probably been the most used piece of equipment we have for digital short runs,” Lang points out. “It’s easy to use, all computer controlled, and is one of the most user-friendly and efficient machines [of its type].”

And that ease of automation was a big draw, considering the shop was originally what he calls a “traditional commercial printer” when it installed its first digital press, although it is “all-digital” today. “We had a traditional scoring machine,” he says, “and everything had to be set up manually, which was very time-consuming. If it was 50 sheets or 500, it was the same setup. With the CRF-362 creaser/folder, you push a button, select what you want, and turn it on.” Since Starline workers produce a lot of work on heavier stocks that require scoring before they can fold them, this ability to automate the process and just let it run has been a massive time saver for the shop, Lang says.

All three printing businesses have seen growth with finishing lines paired to their digital presses, but that doesn’t mean they aren’t still experiencing some bottlenecks, or looking ahead at the next investments they can make to keep their shops ahead of the proverbial curve.

For Starline, Lang says, “I would say the next thing we’re going to do is install a cutter that can be pre-programmed from the prepress department. We spend a lot of time setting that up, so if we could automate it, it would be a tremendous time-saver.” That is especially true in today’s difficult labor environment, with Lang noting that even before the pandemic — as older employees were reaching retirement age — younger generations weren’t scrambling to learn the skill of manual makereadies and operating the old equipment. Moving to digital makes it “much easier to train today than it was before. For most of this equipment, within a few hours of training they can have it up and running pretty well as an operator. On the old equipment, it could take an hour to set up; now it’s ready in 10 minutes, just by pushing a few buttons and making a few micro-adjustments.” 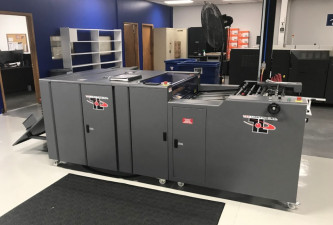 TC Delivers’ Mike Evers says shops should pay attention to more than just the main digital printing equipment, and consider what types of finishing they will need up front.

At TC Delivers, Evers points out that his next investment will likely just be adding additional units to increase capacity and provide greater flexibility. “We bought a single station with a feeder, but it’s modular equipment, and they offer additional stations,” he says. He notes that right now, if the shop wants to perf the sheet as well as slit it, they have to run it through the finishing equipment twice. “As volumes grow, that will be our next evolution. Right now we do one, and then the other, but if we could do it all in one line, it would be a big bottleneck saver.”

For American Litho, the upgrade is actually coming this spring, when it will be taking delivery of an HP PageWide T490 HD inkjet web press, which Pope notes will “go right into the finishing line like we do our existing presses.” With that, he adds, they will have the versatility of a press that is running in-line with some finishing, while still having near-line finishing options, expanding the flexibility the shop has when it comes to getting the jobs onto the right equipment that makes the most sense from a quality, speed, and cost standpoint.

The Wisdom of Experience

What advice would these shops offer to others looking to first enter, or further grow, their digital printing capacity? Beyond simply not overlooking the finishing side, which is just as critical to the success of the new opportunities as the press itself, they each have some lessons they learned that they hope others can benefit from. 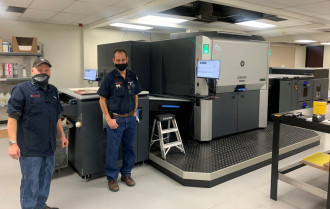 Team members at Starline, based in Albuquerque, New Mexico, stand with their HP Indigo 12000 digital press, which is paired with a variety of postpress equipment acquired from Standard Finishing Systems.

Lang notes that one thing printers — especially those used to running traditional equipment — need to realize is that digital printing and finishing equipment require a much cleaner environment to operate in than what some printers may be used to. “The commercial [print] environment is fundamentally kind of dirty,” he says, “so you do need to change your environment.” Moving into digital equipment, which is primarily computer operated, requires that delicate sensors be kept clean to ensure they continue to operate at optimum efficiency. “Part of daily maintenance should be making sure the sensors are clean all the time,” Lang advises.

For Evers, it’s a matter of looking beyond the main equipment itself. He points to the installation a UV coater, which has allowed him to bring that process in-house as well. However, he acquired one equipped with an exit tray, rather than with a stacker, which he says kills the efficiency of the UV coater. “It requires someone to be at that machine during the entire run, versus an automated stacker where they could load the paper, turn it on, and then walk away to do other things. Going with the exit tray saved thousands of dollars, but the stacker is something I plan to add in the future. If you buy a UV coater and not the stacker, you’ll be wishing you had!”

American Litho’s Pope reiterates his earlier advice, that higher volume operations should start “budgeting for a second bindery line right away. It’s not cheap — two bindery lines will be close to [the cost of] a press,” but it will make all the difference when it comes to productivity. “I wish I had known up front that it was two-to-one.”

As print continues to get more personalized, with shorter runs and more experimentation with shapes and sizes — especially in the direct mail space — digital printing will only continue to be a more valuable tool in a printer’s arsenal. But investing in digital presses is only half the battle, and not taking the time to evaluate your finishing needs and invest in that side accordingly as well, will just lead to frustration and missed opportunities.

Bottlenecks cost time, and time, as Franklin once said, is money. With margins already so thin, printers can no longer afford to leave those profits on the table by ignoring any production bottlenecks that slow their entire operation down.