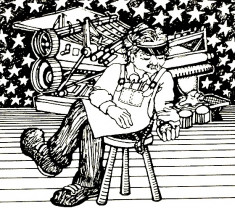 Here’s the next installment in our continuing series of republished “Otto’s Night Watch” columns written by Otto Boutin, which appeared monthly several decades ago in Printing Impressions. Taken in the context of the 1930s Great Depression era where Otto cast the story, it's another classic. Enjoy!

During the depression of the ’30s we had no war to worry about, no draft, and no atom bomb. We were interested in communism as a form of social philosophy, but we did not regard it as a menace. We were convinced that mass starvation in Russia would put an end to Lenin’s dream.

In America the Communist party was represented on the ballot during elections. William Z. Foster ran for President of the United States on the Communist ticket in 1924, 1928, and 1932. Earl Browder ran in 1936 and 1940.

Communist newspapers were published in many languages. The Daily Worker was displayed on the stands beside The New York Times. When my job folded under me I found myself linotyping a few days a week for the Chicago Daily Record, a communist tabloid which soon ran out of money. Then I bounced around from one shop to another, getting a political education while setting type in Czech, Slovak, Slovene, Croatian, Polish, Spanish, and a bit a German, where I had trouble because I couldn’t read the Gothic script handwriting. Besides working for capitalists and communists, I also set type for anarchists and socialists.

Finally I got connected with a typesetting outfit that specialized in foreign language publications. One of our tabloid dailies was supported by the Communists. We’ll call it the Balkan Red Star.

One evening it was my job to collect money from its publisher. His office was in back of the Communist Grocery Store, a block away from the print shop.

Comrade Jozef glared at me from behind his desk. “I haven’t the money,” he said, lowering his shaggy gray eyebrows. “At midnight you call me down here. What good does it do? I just haven’t the money.”

Besides being publisher of the Balkan Red Star, he was also treasurer of the Communist Grocery Store. He knew the combination of the big safe in the corner.

“The forms are locked up,” I said, glancing at the clock. “But we won’t send them to the pressroom until I get the money. Ninety-six dollars. Cash.”

“You owe five hundred already. From now on it’s cash on the line. Every day.”

He tossed his wallet to me. “There’s forty dollars in there. Take it.”

“Not enough. How about the money in the safe?”

Comrade Jozef raised his hands in protest. “That money belongs to the grocery.”

“What’s more important?” I asked. “The newspaper or the grocery? There are a lot of grocery stores, but only one Balkan Red Star.”

“The paper is more important,” he admitted, nodding his head. “Without it we are lost. The newspaper keeps us together.”

With his elbows on the desk, he buried his moon face in the palms of his hands. “I wouldn’t have to be begging like this,” he mumbled, “if I’d only get cooperation. Especially from my relatives. They all want to be on payroll but none of them want to work. Take my son-in-law, for instance. That book he’s writing. Two columns every day we print of it. What do you think?”

“He quit his job as a barber and decided to become an editor. So I put him on the payroll. Now he wants to be a Dostoyevski. All the time he’s working on his book. He thinks he’ll go to Hollywood and become a millionaire and the hell with the proletariat.”

“The forms are waiting.” I repeated, still staring at the huge safe. “All I want is ninety-six dollars.”

Comrade Jozef looked at the safe, but shook his head. “Last week I sold a full page ad to the Big Show Company. It featured shoes for working people. I almost got a contract for one hundred dollars a week of advertising. And what did my son do? Not my son-in-law. My own son. My own flesh and blood. It was really my fault for sending him to the university, where he got such crazy ideas. He wrote an editorial telling people not to patronize the Big Shoe Company. He said it was taking bread away from the mouths of poor shoemakers. And that was the end of the contract. And you think it’s easy running a newspaper.”

“Why don’t you get the little shoemakers to advertise?”

“They aren’t communists. They consider themselves business men. They’re middle class. They want to be capitalists.”

“The grocery store must be making money,” I said. “Maybe you can borrow from the safe.”

“The grocery store making money?” Comrade Jozef snorted. “With my brother-in-law running it? He put on 30 pounds since we made him manager. All the time we’re running short of limburger cheese and salami. When a customer comes in, he says, ‘Go away. Can’t you see I’m eating?’ Now he wants a liquor license so he could sell beer. Imagine him with limburger and rye bread and an ice box full of beer. He’d lock himself in the store so nobody would bother him. And his belly would bust.”

“But there must be some money in the safe,” I insisted.

“There is. The committee put it in there. A thousand dollars they raised to keep the grocery going. But all women shop in the chain store. My own wife. I asked her how come she didn’t buy a bar of soap in our own store. She told me it was a penny cheaper in the capitalist store. She walks two blocks right past our own store to save a penny on a bar of soap. My own wife.”

“The pressmen are waiting.”

“The grocery store I can do without,” said Comrade Jozef, slowly rising from the chair and walking toward the safe. “But the newspaper I need … for political reasons … maybe some day I will be a senator … Will you please punch me in the nose?”

“Will you punch me in the nose?” His eyes were serious. “I can’t just hand the money over to you. The committee would fire me. But if you’d beat me up and made me open the safe …”

He took out a thousand dollars in four rolls of tens, with rubber bands around them. “This ought to keep the paper going a while,” he said. “Now if you will punch me in the nose …”

I put the money in my pocket and clenched my fist. His eyes were closed shut, as if he expected excruciating pain. But I couldn’t hit him.

“What’s the matter?” he asked, cautiously opening one eye.

“I don’t know. I just can’t do it. I’m going back to the shop to get the presses rolling.”

He was still standing at the open door when I turned the corner. In the print shop there was a feeling of relief when I sent the forms to the pressroom. Jozef’s son-in-law, the novelist, was especially happy.

“I’ve got to get back to the typewriter,” he said. “To write tomorrow’s installment. I left the heroine in the office of a Wall Street capitalist. He’s undressing her.”

But before the novelist could settle down to the seduction scene he was called to the phone. Protesting that he could not abandon the heroine at such a delicate moment, he nevertheless walked out into the street. A few minutes later he was back at the typewriter, nursing a bruised knuckle. He was laughing as he typed.

We stopped the presses to insert a bulletin on the front page.

“Comrade Jozef, publisher of the Balkan Red Star, was beaten last night by two hold-up men. They forced him to open the safe of the Communist Grocery Store. They escaped with one thousand dollars. Comrade Jozef suffered a broken nose.”