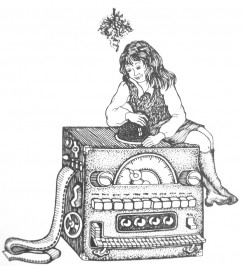 Mara and Michael, the two children of Publisher Higgins, visited the composing room of the Daily Bugle every Christmas, to show that we were all members of one happy newspaper family.

Mara, with lustrous black hair falling smoothly over her shoulders, looked prettier than ever this year. There was a time when she had been a rich little snob, but the courses in modern art and existentialism had awaked in her a genuine sympathy for the working class. She kept in good shape by marching in every possible picket line. She even picketed her father’s newspaper when the stereotypers were protesting against a leaky faucet in the washroom.

When she has bivouacked with the Yippies in the Battle of Chicago she had a portrait of McCarthy painted above her right knee. Then she had to have her miniskirt shortened so people could see way up to McCarthy’s intelligent eyebrows.

Michael, on the other hand, didn’t have time for silly demonstrations. He was too busy trying to invent some kind of computer that would eliminate people.

In college he was working on a thesis entitled “The New Genesis,” in which he was trying to prove that the creation of the world was the work of a Supreme Computer. On the first day the computer created light. On the second day the 15-level tape divided the waters and permitted the firmament to appear. On the following days came the plants, the animals, and Adam and Eve.

On the seventh day, Michael’s computer was programmed to make corrections, like deleting cockroaches. But it never got that far.

And so, with a tinseled tree on top of a make-up table, we waited for Mara and Michael to come to our Christmas party. We gave Mara two dozen long-stemmed roses, as we always did. And we gave Michael a half-gallon of very good scotch, being well aware of the refined tastes he had developed in college.

Michael didn’t open his bottle. He merely kissed it and drank from our own bottles until Mara, with sisterly devotion, had to hold his shoulders to keep him from falling off a chair.

We sang "Jingle Bells” and drank a toast to Old Man Higgins, who had gone back to his home in the suburbs. Then we drank toasts to the Daily Bugle, to Mara and to Michael.

Then Michael held a bottle high in the air and shouted, “To automation!"  And he sucked the bottle dry.

“To automation!” repeated Pawlowski, a machinist. “Wait, Mr. Michael, I show you something.”

And he pulled a tarpaulin off a high tin box, almost as tall as a Linotype and just as wide.

“This is my great invention,” said Pawlowski, with a dramatic flourish of his hand. “It sets type all by itself.”

“A computer?” asked Michael, trying to focus his bleary eyes.

“Better than computer. I show you.”

Pawlowski wheeled the big box to a Linotype and clamped it over the keyboard. As he snapped a switch a red beacon light began rotating on top of the box. Yellow and green lights flicked all over the sides. Pawlowski pushed a perforated tape into a slot and the keyboard began clicking. Hot slugs came down a small conveyor belt.

“So what?” he said finally. “It’s no better than the system we already have. And it’s clumsier.”

He pushed a sheet of typewritten copy through rubber rollers. Slugs came out without errors.

Michael lurched to his feet and almost fell down. He leaned against the tin box. “D’you mean to tell me this gadget can read? It can scan?”

Michael’s eyes bulged. “You’ve really got something there. Now we can eliminate the damn union men. And really make some money. Can I look inside?”

Pawlowski shook his head. “Too much electricity,” he warned.

But Michael’s hand was already on a latch. He was thrown back to the floor with a heavy jolt of electricity. In shocked anger he glared at the box.

“Very sorry,” said Pawlowski, “I told you. Too much electricity. Must not touch.”

Subdued, Michael whispered hoarsely, “That invention could be worth millions. We could rent it to publishers. At a hundred dollars a day.”

“A hundred dollars a day?” Pawlowski’s eyes opened wide. “I show you something.”

He pressed a button and the beacon light turned from red to purple. Then he picked up a mouthpiece and said, “Merry Christmas to everybody.”

The slug came out in 8-pt. Corona on a 9-pt. body. Michael reached for it, letting it burn his fingers as he deciphered it slowly. “Merry Christmas to everybody.”

Then he jumped to his feet. “Five hundred dollars a day! That’s what it’s worth! This is what we’ve been really aiming at. We’ve broken the bottleneck in communication. I’ve got to call my Pop. He has to see this.”

And he staggered down the aisle towards the phone.

Mara, daintily nibbling at bon-bons, had been staring at the tin box with a smile of amusement.

Barrymore was a magnificently profiled Linotype operator who did a lot of acting at amateur theatricals. He was always waiting for that magical call from Hollywood.

“He’s acting somewhere,” I told her. “You know, playing the part of Santa Claus. At some orphanage, maybe.”

“But he’s always been here at the Christmas party,” she said. “This is the first one he’s missed. I saw him in Chicago last summer. With the Yippies, you know. We rode in the same paddy wagon.”

“He was on television,” I said profoundly. “Getting his head cracked by the police.”

“May I talk to that tin box?” she asked, reaching for the mouthpiece.

Pawlowski shook his head, but there was nothing he could do with a determined girl like Mara.

“Hello, you big gorgeous hunk of computer,” she said. And the slugs came out, even with an exclamation point. Then she whispered something that we could not hear because Michael was yelling at all of us to come to the phone.

“But dad!” he was shouting. “You’ve got to come down here right away. This guy’s really got something. It reads tape. It reads copy. It reads a voice. The damn thing’s almost human. It’s worth millions. No, I’m not drunk. I’ve got witnesses.”

By the time we got back to the tin box the beacon light had gone out. The machine refused to set type no matter what we stuck into it. Pawlowski even shouted something nasty in Polish, but the machine stood obstinately silent.

And Mara had disappeared.

Come to think of it, Barrymore had really put on a good show in that tin box. He always claimed that he could set type better than any computer. Now he’s bragging that he’s going to do what no computer can ever do. He’s going to reproduce himself, five or six times.

As the son-in-law of the publisher, he now has plenty of time.