Otto's Night Watch: 'Living Is Doing What You Believe In.' Flashback Friday 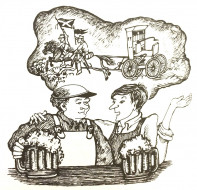 Here’s the next installment in our continuing series of republished “Otto’s Night Watch” columns written by Otto Boutin, which appeared monthly several decades ago in Printing Impressions. In this week’s short story, Otto meets an old newspaper printer who recounts how a newspaper down South kept publishing during the Civil War, despite having General Grant and his troops hot on the publisher's trail trying to shut it down. In typical Otto fashion, there's a moral to the story, though, about the true definition of living and committing fully to what you believe in. Enjoy!

"Living Is Doing What You Believe In"

He sat alone at the bar, nursing a bottle of beer as he watched television. He had just finished his shift at the Daily Bugle and there was no place for him to go at two o’clock in the morning. There were the four walls of the rooming house and nothing else. There was no companionship there. All the other tenants had decent hours and were fast asleep already. The all-night tavern was a place where a person could unwind, relax, and talk to other printers.

But even in the tavern there was nobody who wanted to engage in conversation. Not with a man who was hitting seventy. The younger generation did not care to talk. They just sat and watched the tube.

The man seemed glad to see me sit beside him. Glancing at my hair, as gray as his own, he offered to buy me a beer.

“Work for the Bugle?” he asked.

“D’you know,” he said, “no matter how you wander around, you always remember the paper where you served your apprenticeship. Don’t you?”

“It’s like home. You remember the apple pie, but you don’t remember the whippings. You feel loyalty to your first paper, like to your mother.” Tears glistened in the old man’s eyes. “I ain’t never felt so attached to any paper like I did to that first one. I was real proud of it.”

“We all remember the first one,” I agreed.

“But this one had tradition. Even General Grant couldn’t put the Memphis Appeal out of business.”

“The War of Northern Aggression,” the old man corrected. It was a proud rebel paper. So he captured the print shop. But d’you know what?”

“A week or so later he sees copies of the Memphis Appeal in the city streets. The same old rebel paper, telling everybody to rally around the Dixie flag. The paper was being sold right under General Grant’s nose.”

“The publishers were a pair of fire-snorting rebels. Two colonels named McClanahan and Dill. They were newspapermen of the old breed, not the country club sissies you have nowadays. They saw that the Federal gunboats were winning the battle in Memphis harbor. So they loaded a press and some cases of type into a box car and took off. They set up shop in Grenada, in Mississippi, about a hundred miles down south. They kept the same old masthead, though, the Memphis Appeal. They even kept correspondents behind Yankee lines. That was real journalism.”

The man looked much younger now that he was talking about something that interested him tremendously. It seemed that he had memorized the history of his first newspaper, the Memphis Commercial Appeal. And it was obvious that his memory was playing tricks on him. Although he had been born long after the Civil War had ended, his spirit was in that box car, with its press and type cases. He was escaping the dullness of modern life by imaginatively participating in the horrible but exhilarating adventures of the Civil War.

“The main thing,” he continued, “is that they put up a fight. They didn’t sit down to figure how much it would cost in dollars and pennies to keep putting out the paper. They decided that the paper would be published come hell or high water, or General Grant.”

“So what did they do when General Grant caught up to them?”

“He didn’t. By the time Grant’s army got to Grenada, the print shop was on a box car heading further south, to Jackson. For the next few months the Memphis Appeal was printed there. Same masthead. Same editorial policy. Telling Grant to go home. And calling him nasty names. Grant was sure mad at the paper. He’d send his cavalry ahead to look for the print shop.”

“Did he find it in Jackson?”

“Just missed it. The print shop had moved east to Meridian. From there the box car went to Atlanta, Georgia. For almost a year the Memphis paper was being published in Atlanta. You’ve probably seen the movie ‘Gone With the Wind.’ Well, that’s the way Atlanta was. The Memphis Appeal kept coming out while the city was burning. The Federal shells were bombing the hell out of them. General Sherman was taking the city on his march to the sea. The print shop was put on a box car again and moved to Montgomery, Alabama. Now and then, along the way, the paper was printed on a proof press. Those were real newspapermen.

“What did they use for paper?”

“Any paper they could find. A lot of times they used wallpaper. And shoe black for ink. Sometimes they ran out of wood for the press. They had to keep feeding the fire to keep the steam up. It was a one-cylinder Hoe press. Wood was hard to get sometimes. Once when their fireman was looking for wood he came across a barrel of whiskey, just lying around. It was worth its weight in gold. Whiskey was selling for $2.50 a shot, the cheapest. The Federals were coming in fast, so the printers loaded the barrel into the box car along with the rest of the equipment. They must have had fun, putting out that paper.”

“Oh, they got paid, all right. The typesetters were getting 75 cents a thousand ems and the pressman was $75 a week, Confederate money that is. But nobody got rich working for the paper. Eggs were $5 a dozen and coffee $18 a pound. No, none of the boys got rich. But they were proud of working for the paper. Proud rebels to the end.”

“Didn’t they get caught?”

“They had a lot of narrow escapes. From Montgomery they had to hurry back to Georgia. In Columbus a Federal cavalry unit finally caught up with them. Scattered the type in the streets, like they did to all rebel papers. They couldn’t find the press, though. But the war was over already. Lee had surrendered a few days before. Down South they didn’t know about it yet.

“What became of the press?”

“It was hidden in Macon. Eventually it was put on a cotton wagon and hauled to Chattanooga. There it was put on a boat. Finally it got back, along the rivers, to Memphis. And the Appeal continued publishing in its home town. After three and a half years of wandering through the south.”

The bartenders brought two more bottles and we drank in silence. My companion blandly looked at the television for a while and then he said, “It must have felt important to be a printer on that paper. A man was really living, doing what he believed in. With cannons trying to knock his head off. Nowadays all we do is put in our time and pick up a paycheck. But we’re not really alive. We’re just numbers on a computerized payroll. If we drop dead, it’s just a number missing. Tomorrow there’ll be another number. There’s no loyalty any more. How can you be loyal to a publisher you never see? How can the publisher be interested in a printer who is just a number? To him we’re just a bunch of bums demanding more money. And all he wants is more money for himself. It’s the only important thing nowadays. Just money. But there was a time ...

“There was a time when money was not so important. You worked for a newspaper out of loyalty. You felt that you were important to that paper. Like those printers putting out that rebel paper. It must have felt good to set the type that made General Grant cuss you up and down. It must have felt good to print on wallpaper with bombs bursting in the streets. And General Sherman chasing you across Georgia. It made you proud of being a printer. But this idea of working for nothing but a computerized paycheck … and spending it in a tavern … or on some fancy junk … it doesn’t make sense. It ain’t really living.”