When a printing company can trace its history back more than 150 years, it could be said it had a jump on the competition. And while it may be fashionable for today’s commercial printers to attempt to diversify their offerings by entering the package printing realm, most are late to the convergence party compared to Marshall & Bruce Printing Co.

Situated along the Cumberland River in Nashville, Tenn., Marshall & Bruce employs a team of 85 employees working out of a 60,000-sq.-ft. printing facility and a 35,000-sq.-ft. warehouse and fulfillment operation. The business, founded in 1865 as a book bindery by Andrew Marshall and J.H. Bruce, now offers a full range of commercial, packaging, and point-of-purchase (POP) printing services.

While the Marshall and Bruce families owned the company for decades, it eventually was sold to a group of investors in the 1950s. In 1968, Bob Smith was hired to run the company for the investment group. He would go on to purchase Marshall & Bruce in 1983.

Today, Bob Smith’s sons, Chip and Dudley, serve as company president and VP, respectively. The Smith brothers have been involved in the family business since their youth. Chip Smith recalls working summers for the company’s office furniture and office supply division, making deliveries and setting up office furniture and cubicles. He went off to study at Auburn University, with no long-term intention of working at Marshall & Bruce since his family didn’t own the business at the time. That changed when his father purchased the company in his senior year.

“I got out of school and started interviewing around and things weren’t going quite as well as I had hoped,” Marshall & Bruce President Chip Smith says with a laugh. “My dad said the business is growing and he would love my help. So, 35 years later, here I am.”

Dudley Smith also joined the company after graduating from the University of Alabama. Now, the Smith family has its third generation involved in the business, as Chip and Dudley’s sons are working in sales and operations.

Shift From Commercial Work to Packaging

“One of the things I think is important to note is that Marshall & Bruce got involved in packaging right about the time my father came on-board,” Chip Smith reveals, explaining that the story of the company’s transition into packaging has become part of the Marshall & Bruce lore over the years. It began in the late 1960s when representatives of a Nashville toy manufacturer — Kusan Toys —visited a toy fair in New York City.

“We had been producing their catalogs and some other commercial printing, and they came back and said they saw this new type of packaging they believed toy manufacturers were really going to latch onto it,” Smith recounts. “It was called a blister card, and they asked if we could produce them.”

A Marshall & Bruce sales rep at the time said they could handle the work, and the rest is history. The company went on to learn how to produce blister cards for toy companies and office supply manufacturers. 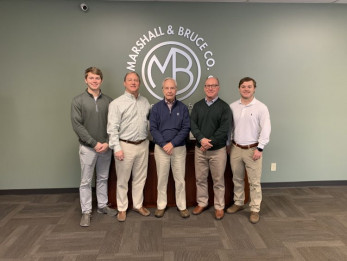 “That was really the beginning of Marshall & Bruce evolving from a commercial printer into a packaging printer,” Chip Smith states. “We were also the beneficiary of there being two very large pencil companies in Tennessee. Office supplies are such a natural product to be put on a blister card, so we started developing that niche.”

Smith describes it as a slow transition into packaging back then, with the company beginning to install diecutters and off-line coaters while learning the packaging process. Meanwhile, the commercial printing business was booming in Nashville, as it was a large financial print center and home to many retailers and ad agencies.

“We rocked along and learned how to do packaging,” Smith contends. “We started producing some folding cartons and then things really started to change in the mid-to-late 1990s.”

The commercial printing business at Marshall & Bruce was beginning to level off and become more competitive, with excess industry press capacity driving prices down.

“We continued to push the packaging, POP, and litho side, and started printing litho sheets for corrugated companies,” Smith recalls. “We started running a lot of 28x40˝ litho label and top sheets.”

As the company continued to develop relationships with packaging customers, one client approached Marshall & Bruce with a big idea that would alter the printing company’s future.

“They said they appreciated the work we were doing on the 28x40˝ presses, but if we would move to a larger-format press, they’d have quite a bit of work for us,” Smith confides. “Really, on a handshake, that was the impetus for buying a KBA 145.”

Subsequently, in 2013, Marshall & Bruce installed a six-color, 57˝ Rapida 145 sheetfed offset press with tower coater and full in-line UV capabilities from Koenig & Bauer. The move has allowed the company to efficiently print high-end POP and packaging work on a variety of substrates, including plastic, vinyl, and styrene.

The Rapida 145 press is teamed with a seven-color Rapida 106 perfector with tower coater and full in-line UV, and a five-color KBA Genius 52 UV waterless press. Marshall & Bruce’s bindery is outfitted with multiple flatbed cutters for sheets up to 70˝, several MBO and Stahl folders, a Muller Martini saddlestitcher, a Universal 950 folder/gluer, and a newly installed AFG 105 folder/gluer.

“We had other customers that we knew we were missing out on for that next-format-size-up work,” Smith says. “We felt like once we had the [Rapida 145] press, we had the knowledge and resources to do large-format work.”

Adding the Rapida 145 allowed Marshall & Bruce to produce window clings, back-lit signage, various POP displays, and other specialty work that no competitor in the area could do at the time. And adding UV capabilities to the press positioned the company to exploit numerous niches, Smith contends.

Moving to more of a specialty printing focus also influenced the sales and marketing strategy of the company. In the end, it has allowed Marshall & Bruce to stay nimble and positively react to fluctuations in the print market.

“As the change from commercial to packaging and specialty printing happened, we did have to shift our focus,” Smith says. “Some of our salespeople gravitated towards packaging and some stayed in the commercial market, which was great.”

Smith sees this market flexibility as a positive, as the company’s versatility has been an asset in times of a down print cycle for certain verticals.

Smith also lauds the support that Koenig & Bauer has provided to Marshall & Bruce over the years. He has been impressed by some of the technological advances pushed by the vendor. “They understand the specialty printing and packaging market as well, or better, than any of their competitors,” Smith maintains. “They have done some things color control-wise that are very important to us.”

He specifically points to the close relationship the company has with Sam Creel, who has been Marshall & Bruce’s KBA sales rep since 2003.

“The consistency of having Sam as our rep and his understanding of our business has really been a big part of the relationship with Koenig & Bauer,” Smith says. “We sought high-quality commercial capabilities along with the packaging capabilities, and that’s what they have provided.”

“We can really help them be successful with getting their products to market quickly,” Smith says. “And with our UV capabilities, we can help them embellish their packaging so that the UV gloss pops out on the shelves and eyeballs go to their products first.”

Marshall & Bruce’s warehouse, featuring a three-tier racking system, offers safe storage for millions of printed and other non-printed items. Products can be inventoried and shipped for fulfillment at a moment’s notice. And customers can access printing services 24/7 through the company’s Web-to-print solutions.

While Marshall & Bruce’s extensive and varied capabilities, storied history, and vast experience are all impressive, Smith singles out the company’s employees as the real stars of the operation. He notes that the family-owned business has many long-term and second-generation employees, which is a source of pride and satisfaction for the company president.

“You can have the greatest equipment in the world, but if you don’t have folks who are committed, trained, and empowered, you will not succeed,” he concludes. “We really want this to be a place where you can be proud of your work and feel good about what you are doing." 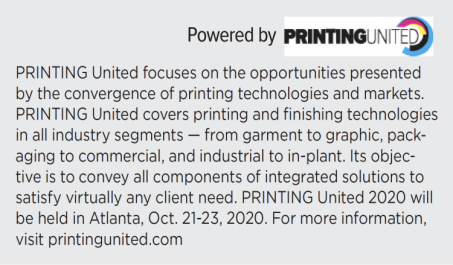