Graphco Opens the Doors to Its New Technology Center in Cleveland 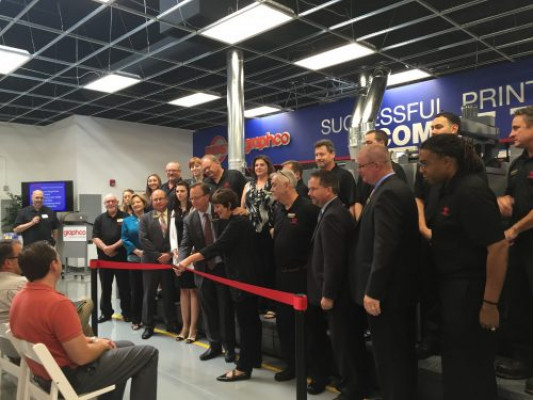 Chris and Theresa Manley get ready to cut the ribbon signifying the official grand opening of the new WD Manley Technology Center. With them is the Graphco staff as they stand in front of the RMGT Series 9 press. 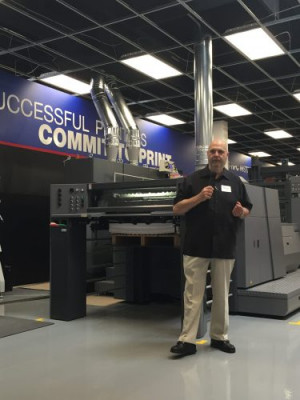 Frank Romano, professor emeritus at RIT, speaks about the future of new print. 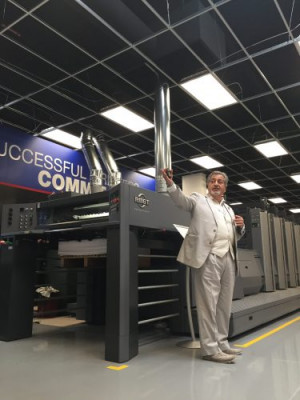 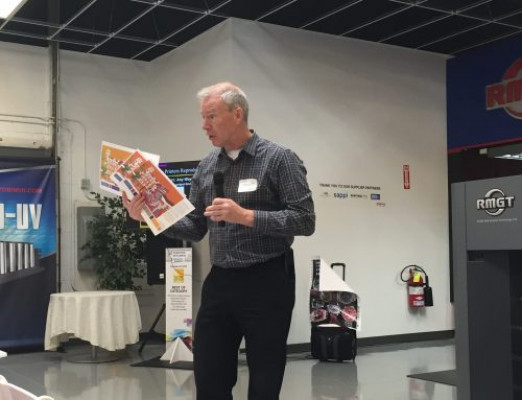 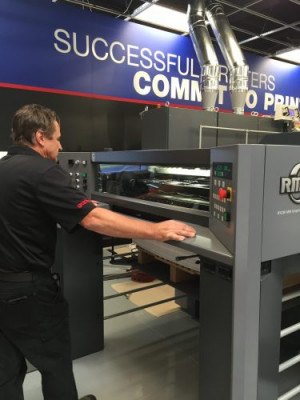 CLEVELAND — It’s home to the Rock and Roll Hall of Fame and to an NBA championship-winning basketball team. Now Cleveland is also home to Graphco’s new WD Manley Technology Center located at its company’s headquarters in Solon, Ohio, a suburb of Cleveland. An Open House to reveal the new demonstration area was held Aug. 30-31 with live demonstrations of the new eight-up RMGT 9 Series press.

The new RMGT Series 9 sheetfed offset press served as an impressive backdrop for the day’s activities, which included presentations from printing industry experts and live press demonstrations throughout the day, including other equipment from the likes of Standard Horizon and Graphic Whizard, which were stationed in the new Technology Center.

The day kicked off with an opening speech from Chris Manley, president of Graphco, on the vision and culture of the company. But most importantly, he spoke of what the new demonstration center has to offer printing professionals.

“Our real goal here is to help print producers learn how to lower manufacturing costs, while improving quality, to increase sales,” he said. “That is what this center is all about.”

Manley reviewed some of the benefits of the new offset press while an operator demonstrated its capabilities. A four-color job was produced using Insta.Color technology from RMGT, which is designed to reduce waste and makeready times. The press also included the Smart-RPC, RMGT’s fully automatic, simultaneous plate-changing system. He continued by explaining that the press can run 16,000 sph and its versatile feeder can process “anything from onion skin all the way up to 24-pt. board with few adjustments.”

As with any true grand opening, Manley and his wife Theresa Manley, VP of operations, initiated a ribbon cutting in front of the RMGT 9 Series press with the Graphco staff.

Following the ribbon cutting, Frank Romano, professor emeritus at the Rochester Institute of Technology, took the floor to talk about “The New Print Industry,” which also happens to be the name of a new book written by one of his students, Akshat Pardiwala, under his advisory. The book was printed by Graphco on the RMGT Series 9 press and bound onsite using both perfect and spiral binding. The book will not be sold; it was given out at the Open House, and will also be distributed to attendees at Graph Expo 16.

Following lunch, Daniel Dejan, print/creative manager of Sappi Paper, spoke about the sustainability of print. He explored our innate relationship with content and discussed the science of the senses based on various mediums: print, tablets/phones, radio.

By the end of the day, attendees seemed pleased with the variety of presentations and demonstrations. One attendee in particular, Brad Flagge, president and CEO of New Berlin, Wis.-based Push Solutions, told Printing Impressions that his company had worked with Graphco to install the Series 9 press last January.

Since the press was installed, the company has increased its business by 38% and has hired more employees. The beauty of the press, Flagge said, is that it can run bigger, longer runs and it can easily be switched between LED and conventional in minutes.

“I wanted the Swiss Army knife of printing presses,” Flagge noted, and it sure looks like he got what he asked for.