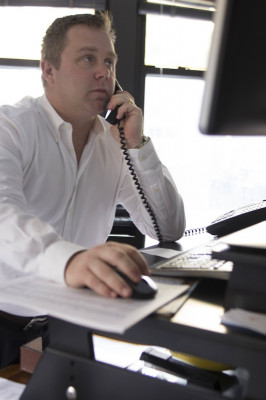 Tim Boucher, founder of B Squared. 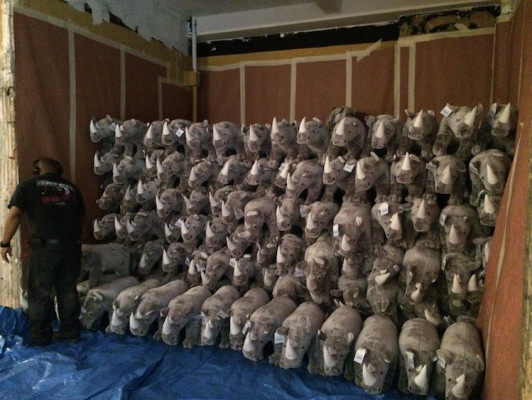 B Squared went above and beyond for a customer that needed a fulfillment job for 1,000 plush rhinoceroses. 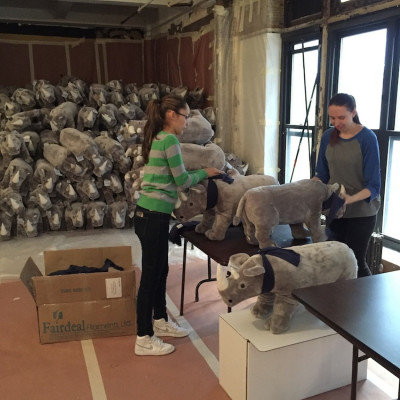 In less than 24 hours, a raw construction site was built out into a dust-free area. The rhinos were boxed and shipped within a single day.

It is impossible to have a nostalgic conversation about printers doing business in New York City without someone mentioning Varick Street and the scores of printing companies that once proliferated Manhattan before the cost of real estate in the borough pushed out heavy manufacturing.

But while the sun may have set on the old NYC printer guard, this is (after all) The City That Never Sleeps. No town in the world leads the league in change as much as the trendsetting Big Apple. And truth be known, a commercial printer grows not in Brooklyn, but mere blocks north of the fabled Varick Street.

B Squared was the brainchild of Tim Boucher and a partner, two opportunists who wanted to be in business for themselves while helping to bridge the gap between designers, printers and customers. The shop opened mere months after 9/11, at a time when certain business in the metro area, including printing, nearly came to a complete halt. But Boucher was fearless and determined to make his mark after years of selling print and reselling Xerox equipment.

Incredibly, this 24-hour, seven-day shop has registered 15 consecutive years of growth — so much so that it is bulging out of its seventh floor location on West 29th Street, in need of larger accommodations. It is a relatively small operation with 27 full-time employees; Boucher refuses to hire temps, believing he cannot vouch for quality in the way he does from his regular crew, many of whom have toiled with him for a dozen years or more.

“Without such a great team,” he observes, “we wouldn’t be where we are today.” But given the cost of doing business in New York City, the traffic and pedestrian congestion, Boucher wouldn’t change addresses with anyone. “Manhattan is the mecca of the world; all of the biggest financial and graphic design firms are here,” he says. “If my business was located in Long Island City or New Jersey, it would take extra time away from customers working on their jobs. They need quicker turn times, which gives them another hour to work on their presentations. We don’t have to worry about traffic, tunnel or train delays.

“You have to feel the hustle and bustle of New York to know what it’s like,” he adds. “We’ll be in Manhattan forever.”

B Squared serves a diverse customer base that, in the words of Boucher, ranges from Fortune 500 companies to mom-and-pops, with a little of everything in between (pharmaceutical, financial, advertising agencies). The firm relies on digital printing equipment, including an HP Indigo 5600 and Xerox Color 1000, along with wide-format output via a Roland flatbed and a Mimaki roll-to-roll printer. Aside from printing and graphic design, B Squared provides binding and finishing, large-format printing, fulfillment and distribution and promotional products.

Boucher has been on the receiving end of many interesting projects, some of which [not surprisingly] would not be equated to mom-and-pop clientele. One such client was Mark Brunett Productions, the NBC reality television show “The Apprentice” that starred business mogul Donald Trump. The contestants were occasional guests at B Squared, which also served as the printer on the other end of the phone whenever the competing business teams required printed collateral for their projects. Certain segments were shot at B Squared’s facility.

It’s not unusual for B Squared to receive a phone call in the middle of the night to provide, for example, rebranded collateral following the merger of two financial institutions. Armored trucks literally transport the goods — which are draped with blankets to conceal their identity until the next morning’s New York Stock Exchange announcement.

Overnight calls have also come from some of the major contenders in the 2016 presidential race, requesting all manner of printed materials, from name badges to signage. But as exciting and glamorous as it may sound, Boucher is equally juiced when the call comes in requesting 200 spiral-bound, 50-page books in two hours. The adrenalin rush, like the din from the scattering masses on the streets outside his business, is palpable.

“We operate in a very discreet and secure manner,” notes Jeff Smith, director of business development. “The studio has top-notch security and there’s a level of discretion expected of all employees. If a financial firm is launching a new fund and we’re printing certain materials for it, everything has to be buttoned up. Clients hire us for our reputation, but also our attention to customer service and discretion. People trust us.”

Though Boucher might get a charge out of his job, the greater satisfaction comes from delivering on his guarantee of 100 percent customer satisfaction. It’s not lip service; every customer, he says, deserves to be treated like a million-dollar client. That entails stretching the boundaries of the definition.

A fun sample illustrating the “above and beyond” mantra came in the form of a customer that needed a fulfillment job for 1,000 rhinoceroses. These rhinos were of the stuffed animal variety and, at about three feet long and another three feet in height, the customer needed special boxes for shipping, an ample supply of crinkle paper and labels.

As one might expect, 1,000 faux rhinos can take up a good chunk of real estate. In fact, Boucher needed to locate a secondary fulfillment base temporarily. In less than 24 hours, a raw construction site was built out into a dust-free area. All told, the rhinos were lovingly boxed and shipped within a single day.

In case you were wondering, it takes nine UPS trucks to collect 2,500 boxed rhinos. “The UPS driver told me it was the biggest one-day pickup from a single location that they’d ever had,” Boucher remarks.

While future rhino shipments may not be an immediate concern, a larger facility is nonetheless one of B Squared’s primary needs in the next 18 months. The company has also been negotiating with HP about acquiring a new HP Indigo 10000. Variable data, Boucher says, is changing the entire industry, and his company is positioning itself to satiate those needs.

“We’re on a growth trajectory in a really congested market, so it is encouraging as we continue to grow as a leader in the industry,” Smith adds. It’s not surprising that Boucher is a card-carrying member of the “print is not dead” club. It’s clear, as he talks about customers, applications and opportunities, that he is in it for the long haul and sees a bright, and long, future ahead for the graphic arts industry.

And the ghosts of Varick Street undoubtedly have reason to smile. It is still possible to be a printer that calls Manhattan home.

“Print is alive. I don’t see a decline,” Boucher enthuses. “More direct mail is being produced than there was five years ago. I see younger millennials who want to touch and feel paper again. For me it’s all very exciting.” PI