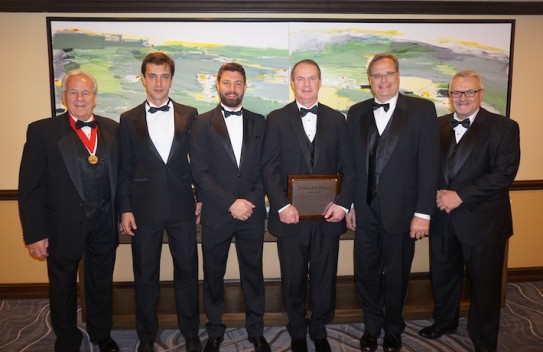 SCHAUMBURG, Ill. — April 7, 2017 — Dave Waller is a rare gem in the printing industry. INX International Ink Co.’s Vice President of Sales - North America, for the rigid packaging and offset divisions has spent his entire 43-year career with one company, a feat not accomplished by many. The National Association of Printing Ink Manufacturers agreed, acknowledging his achievements and honoring him with a Printing Ink Pioneer Award at NAPIM’s 102nd annual convention in Palm Beach Gardens, Fla., on March 13.

“Dave was really deserving of this award and everyone in the INX family are very happy for him,” remarked Rick Clendenning, President & CEO, who has worked with him for many years. “He truly loves this industry and the people he works with. Dave does a great job in mentoring his people so they can move up like he did over the years. He’s a true pioneer and an exceptional professional.”

Waller has served in his current position for six years and added the offset sales responsibilities in January 2016. He started on the ground floor of the business, learning the basics of making ink by accepting the job one week after he graduated from high school. It was with Acme Printing Ink Company, which later was acquired and became part of INX International Ink Co.

“This award is very special to me and it is wonderful to be recognized by your company and the industry. Receiving this award from a prestigious organization like NAPIM makes it all the more memorable,” reflected Dave. “I have worked with hundreds of dedicated people and been taught and mentored by some of the industry’s finest. Following the lead of those before me, I’ve tried to leave every position I ever held in better shape than the day I started.”

He has. A quick study, Waller was promoted to Production Manager after three years, where he learned how to improve efficiencies and safety in the ink manufacturing process. He began his mentoring phase and moved into sales in 1983. After adding skills in operations and technical support, he was named Branch Manager in 1991. The next year, Sakata INX, the parent company of INX International, purchased Acme.

Waller's ascension at INX included accepting a larger role as VP for all offset operations in 1999. Three years later, he was tapped as VP of Business Development for the energy curable product lines and UV and EB products in all business segments. In 2006, he shifted gears to become VP, Sales & Marketing for rigid packaging – metal and plastic technologies, leading him to his current positions.

Throughout his career, Waller has been a participant and supporter of NAPIM and NPIRI. He’s also been an integral part of the company’s support efforts at various conferences and trade shows, attending the Print Show, Print UV, MetPack, Labelexpo, Rad Tech and the International Metal Decorators Association’s annual event.

John Hrdlick to Retire from INX