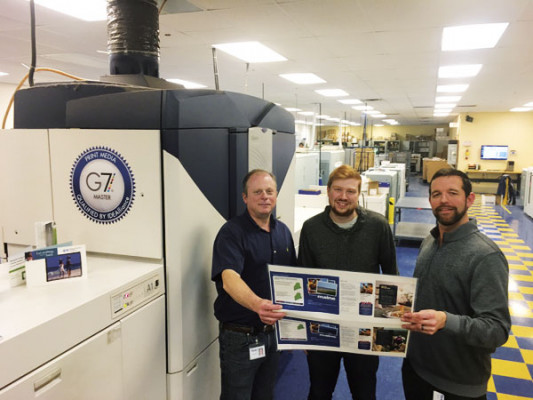 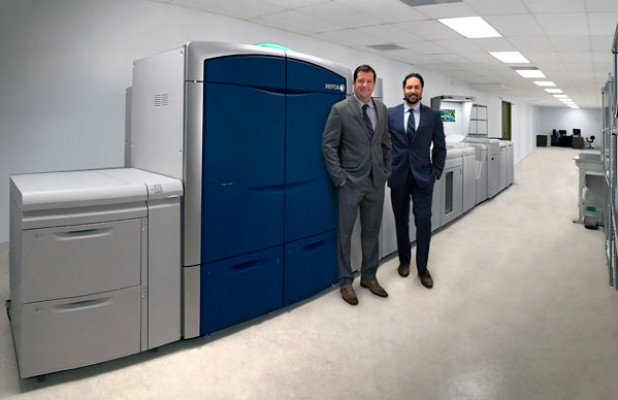 Miami-based Solo Printing opened a new digital printing department in October of 2016, complete with a Xerox Color 1000i press and Fujifilm’s ColorPath DLP for cloud-based color management. Standing in front of the new digital press are Jorge Hernandez (left), VP of operations, and Robert Hernandez, VP of sales. 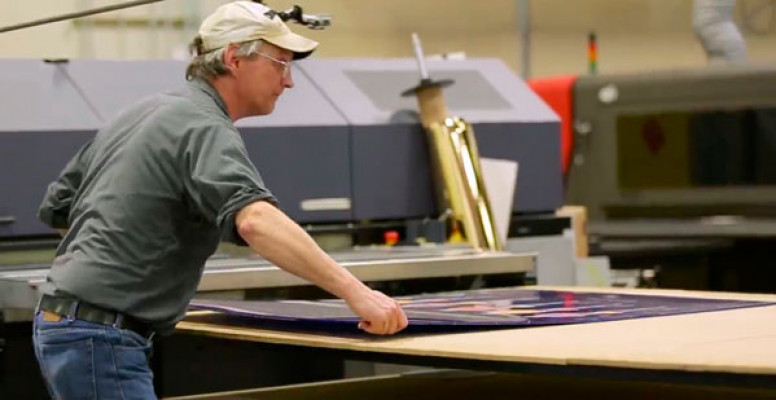 GSP Cos. maintains G7 compliance at all three of its production facilities to maintain color consistency. That helps make the job of press operator Brian Tormey much easier, since he isn’t expected to rely on visual interpretations for a color.

Remember the beginning of “The Wizard of Oz”? In the 1939 Hollywood film, Dorothy, played by Judy Garland, survives a tornado only to find her house has been displaced from where it stood in Kansas. When she opens her shadowy, sepia-toned front door, she sees a magical land … filled with color. “We’re not in Kansas anymore,” Dorothy tells her faithful Cairn terrier, Toto.

Indeed, seeing in color can take your breath away. When cyan, magenta, yellow and black are applied correctly to paper, each turn of the page feels like entering a new world.

But how do we get there? Sans the tornado, preferably.

Five print shops shared their experiences of how they’re achieving effective color management across their various production processes. They all agree that one of the best ways to ensure color consistency is through Idealliance’s G7 Master printer qualification program.

What is G7 specification? “It’s like magic,” explains Theresa Cloutier, senior VP of marketing and customer experience at DMM Inc. The transactional print and direct mail solutions provider, based in Scarborough, Maine, first became G7 Master printer qualified in 2014 and has continued to renew its status since then.

In short, G7’s specifications help presses achieve proper gray balance. This enables color to be standardized across all types of analog and digital printing devices, both new and old.

1,500+ G7 Master Printers, and Growing
According to Idealliance, more than 1,500 printers worldwide have received G7 Master status. To do so, they’ve completed training to successfully calibrate their presses for accurate color production. What’s more, they automate the calibration process so it becomes a numbers game — no more guessing whether that lime green is really lime green or not.

That “magic” Cloutier is referring to comes from streamlining the process. “Every time we take on a new client, we produce a color wheel,” she explains. “The client chooses their color, and then we calibrate the presses accordingly.”

She admits that before receiving G7 Master qualification status, DMM Inc. struggled with some client projects. But the qualification has helped the company retain customers and acquire new ones.

Elaine Scrima, VP of operations at Clearwater, Fla.-based GSP Cos., reveals her company had a similar experience. “Many of the Requests for Proposals (RFPs) we receive ask if we are a G7 certified printer,” she says. “If they don’t ask that question specifically, we tell them we are, and that prompts them to ask the question to others.”

Scrima says G7 calibration status provides an extra separation of the wheat from the chaff. “The G7 qualification has credibility because it isn’t awarded,” she stresses. “It isn’t a membership club. It’s earned and it has to be earned every year.”

GSP first received its G7 Master qualification in 2010. The business also has its very own in-house G7 Professional on staff, Jim Gibbs, who serves as production technology support analyst. Gibbs completed a separate training for this certification, which must be re-submitted every two years. He is responsible for the ongoing development of processes, workflows and trainings across all of GSP’s three plants.

Scrima explains that the impetus behind obtaining GSP’s G7 qualification was to save time and money. Prior to the qualification, operators relied heavily on visual interpretations of what a color was supposed to look like. “We would hear things like, ‘Can you make that more red?’ or ‘Can this be a darker blue?’ We would make adjustments on-press, and when we had to repeat the job, we had no idea what we did to make that more red or a darker blue.”

Following G7 protocol standardizes color and makes GSP’s jobs more consistent both internally and externally. That means GSP’s color reproduction is now consistent with every company that follows G7 standards, whether it’s based in the United States or abroad.

Take Creel Printing, for instance. Headquartered in Las Vegas, Creel Printing has been G7 qualified since 2009 for its sheetfed and heatset web offset equipment. A few years ago, it qualified its digital department as well.

Chris Evans, VP of premedia and customer solutions, explains what the process is like.

Creel hired a color management partner — CGS, makers of the ORIS color management solution that Creel uses — which comes to its facility and re-qualifies its platforms each year. “It’s pretty time consuming, and we dedicate a certain amount of our annual budget for it,” Evans shares.

Next, each press must print out a G7 form, provided by Idealliance, and the gray balance and color densities are analyzed. If they are within G7 standards, CGS submits the paperwork to Idealliance for final qualification.

Alternatively, if a company has its own G7 Expert on staff, he or she can submit the paperwork on behalf of its employer.

All of Creel’s analog and digital equipment produce consistent color using the same G7 standards. But, as Evans notes, a key differentiator for each is the role of paper and substrates. “Because of the absorption of the ink, on the offset side, you really have to qualify certain paper stocks and try to keep that as simple as possible,” he advises.

Luis Fiallos, prepress manager at Miami-based Solo Printing, agrees. “Like any machine, when presses get more and more miles, the printing might change slightly,” he says. It may have more [dot] gain; it might be more sharp. The curves need to be compensated for the movement.”

Solo Printing re-fingerprints its presses about every six months to ensure they are calibrated within G7 specifications. Fiallos says his team also constantly checks the certification of the proof.

“Usually the retargeting of the presses is a formality because most of the time we are still within specs, but we tighten it up again to make sure we don’t drift off,” he adds.

Last October, Solo Printing opened up a new digital printing department, complete with a Xerox Color 1000i press and Fujifilm’s ColorPath DLP for cloud-based color management. Fiallos notes the 1000i has been fingerprinted for G7 specs, as well.

Using G7 procedures, Fiallos says his team doesn’t have to worry whether a proof was made to run on this press or that press. As long as the proofs are pointing toward GRACoL (General Requirements for Applications in Commercial Offset Lithography) and the presses are calibrated correctly, it’s easy to hit the target. That gives them flexibility, he says.

Gordon Rivera is a supervisor at Allan Hancock College’s Campus Graphics in Santa Maria, Calif. Very few in-plants are G7 qualified, but Rivera is working on getting that designation for his shop. He is already a G7 Professional and runs his in-plant to G7 standards in an age when many in-plants are being pressured to eliminate proofs to reduce turnaround time.

“It’s a dilemma,” he says. “G7 adds an extra step, but it’s a security. What’s really costing you money is when you have to reprint.” He compares this situation to recent automobile recalls and what they ultimately cost car manufacturers.

Process control should be invisible to the customer, Rivera advises. It is something they expect and deserve, perhaps even without realizing it. The true test of success is when the customer doesn’t provide any feedback.

His answer is scary. “You really can’t put a number on it because you don’t know the cost until it happens.”

And that is why G7 specifications are like “magic.”

Moving Press Checks from to the Home