Get ready for the rise of mass-customized “B2Me” magazines. Once a pipe dream, the concept of magazines that are tailored to each reader is now a reality.

Consider, for example, ZEB magazine of Belgium, which has a print run of 150,000 copies that are so customized and personalized that no two copies are alike. Several recent developments have made it feasible and potentially profitable for publishers to provide far more customization of their printed magazines than in the recent past. There’s real opportunity here, but also new challenges for traditional magazine publishers. 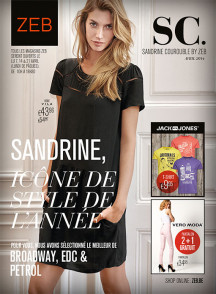 What’s making mass-customized magazines possible are new full-color inkjet presses that can print different versions of the same pages without the expensive press stops and plate changes required by traditional offset printing. Inkjet has come a long way from the days of “uglyjet,” when its usage in magazines was restricted mostly to producing postal addresses, clunky messages and cartoonish images. These days, it can be difficult to distinguish an inkjet-printed magazine page from an offset page.

Changes in the advertising market are creating a greater need and opportunity for customized magazines. Programmatic advertising in digital media has demonstrated the power of getting the right message to the right person at the right time, undermining the “spray and pray” approach often associated with advertising in traditional media.

ZEB magazine is an extreme, but nevertheless instructive, example of what is possible for magazines. ZEB, a multi-brand fashion publisher, uses customer data — such as purchase history, age, gender, favorite brands and place of residence — to customize the text and images on multiple pages of its customer “magazine,” which is arguably a catalog.

The customization and personalization were not a one-time experiment; ZEB continues to tailor each magazine copy because doing so generates enough additional sales and customer loyalty to create a positive ROI.

Magazine publishers, of course, don’t typically have the kind of detailed data on subscribers that ZEB possesses. Customization won’t pay off for most publishers unless we can figure out how it can add value for advertisers — and how to charge them for it. Offset is still more efficient than inkjet for all but the shortest print runs. And complexities arise when, unlike ZEB, an entire magazine can’t be produced with a single press run.

A good starting point is hybrid printing — adding a customized cover, cover wrap, insert or special section to an otherwise conventional magazine. A magazine’s one-size-fits-all subscriber renewal cover wrap, for example, could be replaced with a piece that is customized based on the recipient’s current subscription rate, demographic characteristics and previous purchases. The valuable back cover ad space can be made even more valuable with multiple versions that display different products and local dealers depending upon the subscriber’s age, income, industry, or place of residence.

Imagine a special section with editorial information that varies by region, industry, or job title — plus ads targeted at those specific interests. Creating so many short-run versions with offset would be prohibitively expensive for most magazines.

Tying online behavior to specific print subscribers will open up new possibilities, enabling programmatic-style targeting to those who have shown “purchase intent” but with a more engaging and less annoying medium. (Side note: The U.S. Postal Service’s rapidly expanding Informed Delivery program may significantly enhance our ability to understand specific subscribers.)

And imagine if we could create networks of magazines, where with one purchase an advertiser could place targeted cover wraps on hundreds of magazine titles — but only on copies going to people who own or are interested in, say, luxury cars.

Putting a particular cover wrap or two on select copies, with a variable text message, should be no big deal; publishers have been doing that for years. But I doubt that many publication printing plants today are capable of creating personalized or highly customized inserts or internal pages for copies that are produced in postal-sort sequence.

If all of this sounds prohibitively expensive, consider this: Direct mail campaigns often cost a company at least 50 cents per piece (That’s a whopping $500 CPM in magazine-speak). How much more will marketers pay publishers and, in turn, publishers pay printers to produce and deliver those same targeted messages as part of a respected magazine that recipients are likely to read, rather than in an envelope that will probably be discarded as junk mail? PI