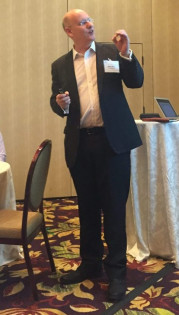 From Feb. 28-March 2, Ricoh hosted the Ricoh Publishing Executive Symposium at the St. Julien Hotel & Spa in breathtaking Boulder, Colo. As everyone settled in for three days of sharing information among peers, Marco Boer of IT Strategies took to the floor to discuss trends in the book publishing industry. One trend in particular in book publishing is the push toward higher frequency, yet lower volumes of, titles, paving the way for on-demand digital printing. Boer commented on the effectiveness of production inkjet technology in this evolving industry:

The irony is that the more offset pages go down, the better digital fits ... We've seen this huge migration to inkjet printing and the reason is very simple. Inkjet printing is really the only technology out there today that can print at near-offset productivity. And because inkjet is much simpler than [digital] toner technology, in terms of moving parts and the like, it's more cost-effective. Inkjet is really the trojan horse.

As pages go down, paper volumes decline as well, which in turn raises the price of offset paper. Boer points out, though, that inkjet treated paper — which has always carried a premium over offset paper — is now experiencing a pricing decline.

Boer then addressed the elephant in the room: Printed books aren't just competing for attention with audio books and ebooks, they're competing for attention from other sources of entertainment, such as social media. They are, however, experiencing slight growth, which Boer contributes to the idea of escapism — people need to escape the everyday battery of politics and the like.

Interestingly, direct mail is also experiencing a comeback, according to Boer. Direct mail growth has been driven by its cost-effectiveness and the fact that it works as a means of marketing.

A large impetus for book publishers to transition to digital printing is the shift toward a reduction in inventory levels. Boer breaks it down into a digestible example that proves a meaningful point. Say a publisher has a single title of which they produce 5,000 copies. If each copy costs $3 to print and you assume a 30% return rate, it isn't too much waste resulting from that 5,000 title run. However, turn that single title into 1,000 titles per year, at 5,000 copies each with 30% waste, and you're looking at millions of dollars lost in waste. Boer surmises that most publishers of a reasonable size have about $5-20 million of waste every year, but if they could redirect those dollars into the promotion of their titles, they could take more risks on new authors.

Boer continued by touching on the need for more staffing in correlation to the amount of setup time needed on offset.

In the offset world, there aren't a lot of young people coming in and dying to become offset press operators, so it's getting harder to find skilled labor. Labor costs are going to go up and even though your [older] offset press may be paid for, at some point it just doesn't make economic sense. And, even worse, it's getting harder to find certain parts. Whether people like it or not, the jump to higher-productivity digital starts to make sense.

Boer explains that with offset costs going up, printers need to be more efficient and standardized. In the past three months, he says that platemaking has been in decline because of the shift to digital that's happening. Another challenging aspect of digital inkjet technology has been paper — namely coated stocks — which has been addressed with coatings, ink additives, etc.

Although there are challenges in adopting production inkjet technology, Boer says there are two reasons book manufacturers should transition for the benefit of the industry. On-shoring is one of the big issues, with publishers turning to China to produce books at a low cost, but with long lead times. The second issue is enabling quick promotion of a new book to increase interest. We live in an "instant gratification" society, he explains, and we have to change the way we do business to meet customers' demands.

Someone once said to me, 'How do you define print quality? It's really binary. It's either good enough for me to sell, or it's not. There's nothing in between.' So I think we have reached a stage now, where all of these inkjet systems are good enough to sell. So I urge you to look closely, particularly at the color systems, because that's going to be the next slug where the business model is going to change.

Ashley Roberts is the Senior Production Editor of the Printing & Packaging Group.