As a technology, LED-UV curing for offset printing is slowly, incrementally gaining favor as a method for curing — using intense UV light of a specific wavelength. As one choice among others, it is a fascinating, perhaps game-changing, means to an end that offers instantaneous curing, minimal dot gain, and the ability to successfully print on a wide variety of substrates. As with any newer technology, printing and packaging companies need to see beyond its novelty and instead find the business case for adoption.

There are two paths for LED-UV curing adoption: to install a new offset press equipped with the technology, or to retrofit an existing press. This article features the viewpoints of four LED-UV curing system manufacturers that offer units for press retrofits.

Is LED-UV Curing Right for Your Business? 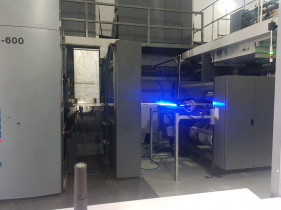 “If any company is looking to diversify its products to include exotic substrates, films, plastics, or recycled papers, they will need to look at UV printing,” Gary Doman, international sales manager at GEW, points out. He says access to these types of materials is the first of two compelling cases for the technology, the second of which is the ability to get work through the printing plant faster. “There is no need to wait for the ink to truly be dry, which enables immediate processing of the materials,” Doman says. Simply put, printed sheets can go straight from the pressroom to finishing or bindery.

Asked why companies should adopt LED-UV technology, Bill Bonallo, president and CEO at IST America, says, “The real question is ‘why would you not?’” UV (and LED-UV) technology tends to create opportunities for those using it. Bonallo adds that one key benefit LED-UV can bring to the retrofit space is that it takes up much less overall space than traditional UV and is normally easier to install. As for the business case, he says, “Companies are more likely to gain a competitive edge because they have the technology in place — and remaining competitive is the most important aspect.”

“Once a company goes LED-UV,” according to Jeff Woloshyn, sales director at Eltosch Grafix America, “they never go back.” He says the technology can bring benefits to most commercial or packaging applications and is an enhancement over aqueous-based printing. The biggest thing, he says, is justifying the cost: “UV is more expensive than conventional, and LED is more expensive than UV.” That said, benefits such as instant curing, going straight to finishing, and lower energy costs are major benefits. As such, he says print services providers (PSPs) must consider whether they can pass the premium on to customers.

Jonathan Fore, commercial lead at AMS Spectral UV — A Baldwin Technology Co., sees commonalities among companies using the technology. He says they center around the types of equipment in use, the type of printer they are, what they provide, and how busy they are. UV overall, Fore notes, saves time, saves money, and improves the product. Further, he says, those companies printing higher-quality pieces may be more likely to convert to LED-UV. This is because instantaneous curing limits dot gain, thus maintaining dot matrix, thus giving a better look.

How Do You Prepare for LED-UV Technology?

“You have to understand the technology,” Bonallo says. He adds that regardless of whether traditional UV or LED is used, “the chemistries are ultraviolet-based, so ink rollers, water rollers, and blankets must be UV-compatible — there are different compounds in the rubber.” Further, wash-up solutions and automated wash-up systems must be updated, as will urethane grippers. “This may be easy or hard to do,” he explains. When the press is running, UV requires a tighter control on ink/water balance, “so the press will need to be run tighter and with more control.” He adds that a reasonably competent press operator should be able to move easily into the new technology. 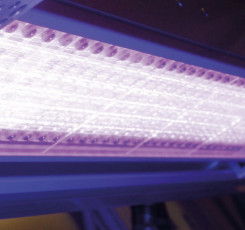 Woloshyn agrees, saying the move to UV or LED-UV “should be fairly easy for the operators.” He says press operators enjoy working with the technology and will “fight” to use the UV-equipped press “because it’s simple for them.” He adds that an initial challenge with UV is “getting the inks and chemicals right — all inks and coatings need to cure at the correct wavelength for the technology.”

Before moving into LED, Fore advises, PSPs should contact their ink companies and other suppliers. He stresses the importance of having the right information. As mentioned, rollers, blankets, and other components need to be addressed. “Once that’s in place,” he says, “you have a fork in the road:” the choice between traditional UV or LED-UV. This choice can further affect physical adjustments to the press. For instance, traditional presses may require a water-cooled sheet guide to control the intense heat of the curing system — not generally needed with LED. Also, unlike LED, traditional UV lamps produce ozone, which is toxic and must be vented.

“The good news,” Doman says, “is that most existing presses can be adapted to UV curing.” That said, he starts that sales process by asking potential customers what they want to achieve. In some cases, he says, it may be to eliminate rejects on recycled and other finicky stocks. In another case, a customer’s goal may be eliminating spray powders. Doman urges those interested in the technology to make sure all their questions are answered, and to understand the extent to which press components must be replaced. Another key preparation step: Talk with your consumables reps. Make sure what you’re getting will be balanced with the technology.

Quantifying the Benefits of LED-UV Curing

While the benefits of LED-UV technology may be easy to describe, quantifying them may be somewhat more difficult. With any transformative technology, key metrics can change. Woloshyn says the biggest advantage with LED-UV is in its energy savings. Another consideration, he says, involves determining whether the energy savings of LED are enough to offset its higher ink costs. 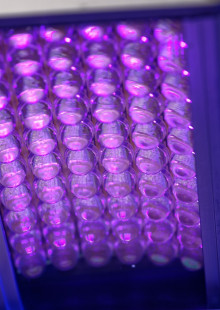 “There are two considerations that come up the most,” Fore notes, “the first of which is increased productivity.” He says it is not uncommon for customers to experience performance that exceeds their ROI assumptions for the technology. “If it can increase the productivity of the press by 25%, then the revenue will follow.” The second is in energy, and in some cases, space savings. On a sheetfed press, he says, companies can move from a gas-fed dryer, “the size of an RV” to a LED-UV curing unit “the size of a computer desk.”

Doman says that because it is difficult to quantify, GEW provides its customers with a mix of anecdotal data and case studies to help them understand advantages and how they may occur. He, like Woloshyn, says energy cost is a key metric to follow. Beyond that, advantages can include, “a reduction in reprints because the ink is fully cured — there’s no scuffing or marking.” Another advantage comes in the form of a question: “Are you turning away jobs that you would be able to do with LED-UV?” Last, Doman points to the savings in clean-up time, noting the ink will stay open on the press for weeks at a time, so press cleanings are much less frequent.

While Bonallo says describing the advantages of LED-UV technology in statistical terms is difficult to do, key measures to undertake include straight throughput on the press, turn times, and increases in press up-time, which all equate to productivity. “There are many things to factor in,” he notes, “and there are still a lot of variables.” While he points out that, “99% of companies that go into UV never go back again,” he also says the concept of what LED-UV curing can offer can be “somewhat miraculous.” Despite its advantages, he says, it still cannot deliver the range of cure and application flexibility experienced with traditional lamps.

Doman says current world events — particularly the Ukrainian crisis — will continue to put economic pressure on energy costs, which he says are likely to increase. This reality may serve to heighten the advantages of LED-UV. Looking ahead, Doman believes that as more PSPs possess the faster delivery LED-UV can provide, other companies will likely jump in as well. “When this happens,” he says, “economies of scale will kick in and costs will come down.” As for the current level of acceptance for the technology, he believes, “it has been accepted as a viable part of the process.”

“[LED] diodes themselves and the power supplies that drive them are continuing to develop; that is still ongoing,” Bonallo says. The goal of ongoing technology development, he says, is in delivering the energy to the substrate. Lenses and similar technology, for instance, continue to be refined to maximize, magnify, and focus energy for curing. Given this reality, Bonallo adds, the distance between the LED energy source and the substrate is paramount — and is refined in both product development and system installation – making its position within the press a consideration. Advancement continues, he says, and developers are discovering “how little energy is needed to get the job done. It’s a great technology for the right applications.”

Like Bonallo, Woloshyn sees getting more power to the substrate as a key area of development. Despite this ongoing effort, he believes LED-UV technology is ready for prime time. “LED can now do all that traditional UV can do — the inks and coatings are there.”

As for LED-UV curing gaining a greater share of the UV offset space, Fore says the tipping point in that area may focus on coatings. “The inks are already there. There used to be a significant difference in price [between conventional UV and LED]. Now it’s only 5% to 10% different.” LED coatings are behind this curve, he says, and are significantly more expensive than for traditional UV. “When those costs equalize,” he says, “we’ll be there.”

Moving into High-End Commercial Print? UV Might Be the Key