Their sponsors call them the Academy Awards of the printing industry – and it’s a fact that nothing else bestowed by the industry carries more prestige than the Franklin Luminaire Awards.

Six tributes for 2018 went to high-profile recipients in a ceremony at Manhattan’s Chelsea Piers on Oct. 17, with Benny Landa (Landa Group) and Samir Husni (University of Mississippi) as the headliners. The four additional honorees likewise exemplify, in the opinion of 20 judges who spent nearly a year identifying and evaluating them, the industry’s best traditions of professionalism, leadership and service.

Since 2014, the Franklin Luminaire event has combined the presentation of Franklin Award for Distinguished Service, a 66-year-old honor recognizing prominent public figures, with the conferral of the Luminaire Awards, which have been given to more than 250 industry professionals since 1988. A related honor, the Zenger Community Service Medal, goes to industry members with exceptional records of community support or activism.

Behind Franklin Luminaire are the Idealliance Foundation of Idealliance, a self-described “global non-profit think tank in the graphic communications industry”; and the Print Drives America Foundation of Printing Industries Alliance, the trade association for print service providers in New York State, northern New Jersey, and northwestern Pennsylvania. Twenty-one corporate sponsors took part in the ceremony from their tables at the Oct. 17 event.

Diane Romano, chair emeritus of the award committee, described the 2018 honorees as individuals “who have helped our industry to spread its branches.” Summoned to the stage with glowing introductions from colleagues were:

The fourth Luminaire honoree, Samir Husni, Ph.D., is well known to many in the publishing world as “Mr. Magazine.” Bob Sacks, president and publisher, Precision Media Group, welcomed him “to the ranks of print’s greats” and called him a “titan” of the medium because of a lifetime spent evangelizing it.

Husni is the founder and director of the University of Mississippi’s Magazine Innovation Center, a research hub for magazines and magazine media. He is, Sacks said, the originator of the concept of doctoral studies in magazines.

Husni recalled “falling in love with the smell of ink on paper” as a boy in his native Lebanon, where he hand-crafted his own publications and started collecting what is today a 30,000-copy library of magazine first editions. He said that upon emigrating to the U.S. in 1978, “my hobby became my education and my profession.” 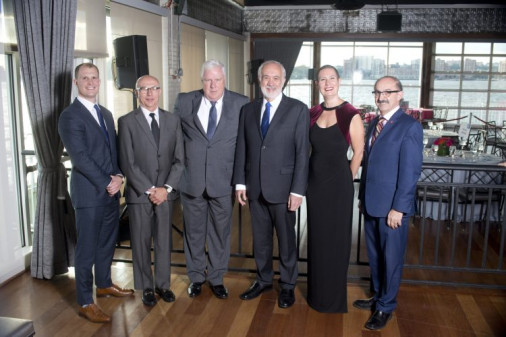 Husni founded the Magazine Innovation Center at UM’s Meek School of Journalism and New Media in 2009. He is also Professor and Hederman Lecturer at the School of Journalism and the author of numerous works on magazine publishing. His Mr. Magazine blog is a primary source of information about launches and other trends and developments in the field.

Cheryl Kahanec, CEO of the Quantum Group, introduced Benny Landa with a detailed recap of his career as an inventor, a visionary business leader, and a philanthropist. Iconic in the industry as the creator of the Indigo and Nanography technologies for digital printing, Landa is the founder, chairman, and CEO of the Landa Group, a developer of practical applications for nanotechnology (the science of manipulating individual atoms and molecules in various materials). 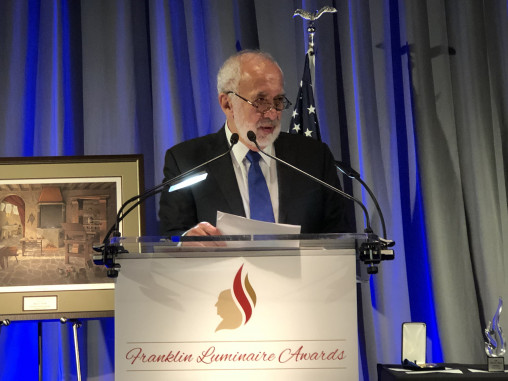 Kahanec cited Landa’s progressive rollouts of the Nanographic press platform at the 2012 and 2016 drupa expos, where, she said, “he showed us that there was something next.” The first such press in the U.S. is scheduled for delivery to Mercury Print Productions in Rochester, N.Y., where it is expected to be in operation in about a month.

In his acceptance remarks, Landa dwelled more on his personal convictions than on his technical achievements (which include filing more than 800 patents). To illustrate, he told a story going back more than 40 years about his attempt to sell Indigo photocopiers – the company’s first product line – to a major U.S. supplier of business machines.

Landa recalled his surprise at being offered an arrangement that was better than what he had hoped for. He said the customer explained that since the would-be seller clearly didn’t know how to negotiate, it was up to the prospective buyer to do it for both of them.

The lesson, according to Landa, is that “the best deal isn’t the one that appears to be the best on the face of it – it’s the one that leaves the other side feeling that it has received the best deal.” This win-win precept has been the cornerstone of his business practice ever since, Landa said.

He also commented on the pending installation of a Nanographic press at Mercury Print Productions. He noted that with platforms successfully installed in Israel and Germany, the time finally was at hand to introduce Nanography to the U.S. market.

“It’s been a long road to get here,” he acknowledged, “but it takes time to do it right.” 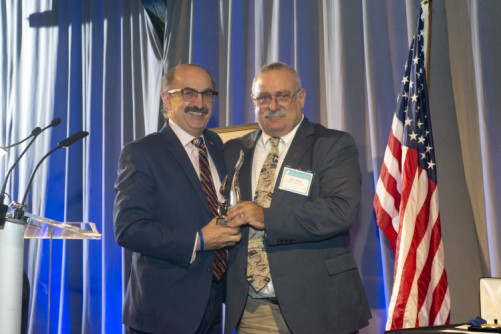 The 2018 Franklin Luminaire Awards ceremony included special recognition for David J. Steinhardt, who became president emeritus of Idealliance on October 1 when he was succeeded by Timothy Baechle as the organization’s CEO.

Steinhardt, who had served as president and CEO of Idealliance since 2001, was hailed for preserving its reputation as a global thought leader in graphic communications through periods of great turbulence and change for the industry.