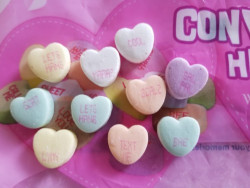 Happy (Belated) Valentine’s Day. Remember those little candy hearts that everyone used to hand out on Valentine’s Day in grade school? They are still a thing. Long before twitter, these tiny hearts had short messages such as “Be Mine” and “Love You”. They still do, but newer messages have been added: “Text Me,” “LYMY,” and “Goalz”. How about “Bae” and “GOAT”? I had to ask my son about those. GOAT still doesn’t make sense to me, but I guess I’m a bit behind the times.

Something else has changed about those hearts. The little messages used to be stamped on (or something like that; I’m no candy expert.) Now they are applied using food-grade inkjet inks. The quality is pretty bad, but I suppose in candy hearts, as in love, it is the thought that counts.

Did this Valentine's Day represent an opportunity for savvy print providers? Probably not. To paraphrase Sigmund Freud, sometimes a Valentine is just a Valentine.

For as long as there has been digital printing I’ve railed against the classic “copier” pricing model: lease the equipment, then pay an additional “click” charge to the manufacturer for every print produced on the press. There are variations, but the end result is always that the digital press manufacturer gets a piece of your action. Clicks are to printing as sharecropping is to farming.

I’ve always insisted that in order for toner or inkjet to really command their rightful share of volume (the lion’s share of print is still produced offset) the click needs to go away. Make a press that doesn’t break down. Sell the press at a fair price. Charge for ink and supplies by the pound instead of by the click. In short, do exactly what offset, letterpress, and flexo press manufacturers have always done.

Apparently, someone has finally listened to me … just not in the way I intended.

I’ve long held up German offset press manufacturer Heidelberg Druckmaschinen as an example for digital press vendors. Heidelberg makes presses that are expensive to buy, but rarely break down and use consumable supplies available from anyone.

None of this is news to anyone in the printing business. Here is what is news: Heidelberg’s little-known “subscription” option. Yeah, subscription means clicks, although Heidelberg vigorously denies it. Apparently they realized they were leaving money on the table with their old-fashioned ways, so now anyone can have a Speedmaster on their floor. Why pay now, when you can pay forever?

Just Right vs. Too Much

I recently received a marketing email from Quog Ellex, the company that stocks bazillions of replacement parts and supplies for bindery equipment. I opened it. I think they send me two or three emails per year, reminding me that they have those hard-to-find items that we probably need to keep our machinery running. They also send us a catalog every few years, which we keep for reference.

On the same day, I received about 50 emails from various firms with whom I do business or have done at one time in the past. I deleted them all without opening them, and unsubscribed to a few. These overzealous folks send emails EVERY SINGLE DAY, so I don’t bother to read, or even open them. Daily repetitive emails are nothing but glorified spam. More isn’t always better, and less is often more.

The Value of Print

“Paper shows that analog technology can excel at specific tasks and uses on a very practical level, especially when compared to digital technology. While paper use may have shrunk in certain areas since the introduction of digital communications, in other uses and purposes, paper’s emotional, functional, and economic value has increased. Paper may be used less, but where it is growing, paper is worth more.”