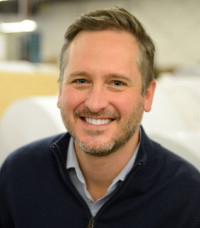 Johnson & Quin, Inc. celebrates its 145th year in the printing industry, beginning as a ledger book printer in Chicago in 1876 and evolving into a national supplier of direct mail production and mailing. The company also announces the promotion of Andrew Henkel to President. After 33 years of leadership as CEO and President, David Henkel is handing over this key role to his son. Andrew has been with the company for 15 years, initially concentrating on sales and most recently as Vice President. During that time, his leadership has helped Johnson & Quin remain competitive in the direct mail industry. He was heavily involved in steering the company from older print technology to state-of-the-art color inkjet print and personalization which has been key to the company’s growth.

“Andrew’s new role as President is a logical signal of generational change, as well an important sign of continuity to our clients, prospects, vendors and employees,” states David Henkel. “Andrew has been key in managing many of our major clients and instrumental in major company decisions over the past several years. He is supported by an exceptional management team, who have all been involved in the operation and growth of the company over the years.”

As a result of the Henkel family’s strong leadership as well as the increase in mail volumes, Johnson & Quin is seeing significant growth in their clients’ programs. This has resulted in the need for more production equipment and staff to ensure meeting the higher quantities and schedules. After the initial impact of COVID, there has been a resurgence of direct mail due to the high response rates the media is experiencing as consumers adjust to the new normal with the ongoing pandemic.

To meet the higher demand and add capacity for new programs, Johnson & Quin is in the process of completing the installation of four high-speed inserters with the ability to customize the outer envelopes, as well as multiple high-speed bindery lines. A fourth Screen High-Speed Color Inkjet Press has also been installed to significantly increase the volumes of full color personalized forms that can be produced and mailed each month. These, along with other investments, will enable Johnson & Quin to produce an additional 150 million pieces annually.

“With the increased volumes of mail in combination with the paper and labor shortages caused by the pandemic, the direct mail industry is seeing challenges in meeting the demand that have not been experienced in the past,” according to Andrew Henkel. “Luckily, we have stayed on top of the latest technology in equipment and information technology, collaborated closely with our vendor partners and adapted to the constantly changing issues to keep the mail moving into the postal system.”