IJS Keynote: Road to Success with Inkjet Can Be Hard, but It Ends in the Right Place 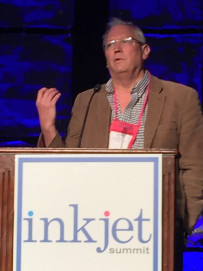 A 25-year involvement with inkjet printing teaches some lasting lessons about how to be successful with it. One of them, according to Robin Welch, is that success doesn’t come without setbacks.

A keynote speaker at Inkjet Summit 2017, Welch is the chairman and group board director of GI Solutions Group, Britain’s seventh-largest printing business. He has been pushing the limits of what production inkjet can do since 1992, when the Leicester-based company first began experimenting with black-only heads mounted inline on an eight-page web press. “We wasted more pages than we produced” in getting the combination to work correctly, Welch recalled.

Today, the company relies on high-volume inkjet equipment to print and mail 500 million postal pieces per year — about 5% of all the addressed mail sent annually in the U.K. Inkjet printing is one of the primary enablers for the services offered by GI Solutions Group, which has data and marketing divisions as well as the production arm. About 25% of the group’s £80 million ($103 million) annual turnover comes from non-print creative and data services; the printing is split 60/40 between direct mail and transactional documents, respectively.

The 42" HP PageWide Web Press T490 that GI Solutions is currently installing is the fourth color inkjet web press it has purchased from HP. Stand-alone inkjet equipment has been central to operations since the company beta tested — for the first time in Europe — a pair of high-speed, 20" duplex inkjet lines in 2008. Between taking those exploratory steps and gaining the mastery of the process that the company enjoys now, said Welch, came some challenging and even “scary” moments.

“Getting customers to change their behavior is massive,” he said, alluding to the resistance some of his customers initially put up to the idea of switching to inkjet. For the first 18 months, the company had virtually no inkjet sales as it searched for the right way to sell the technology to its clientele.

The scary incident occurred when, after convincing two major transactional customers to migrate their work to inkjet, Welch and his team realized that they hadn’t pitched the idea high enough in the corporate hierarchy. Senior executives quashed the sale on the pretext of a paper issue, leaving the printers with nothing to show for the effort except a keener understanding of how rough the going was likely to be.

Welch said the most important takeaway for first-time production inkjet adopters is to be realistic about what to expect: “Double the time and half the revenue forecasts in your first 18 months!” Since customers often don’t do what they say they are going to do, make it “frictionless” for them to engage in testing that will make them believers in inkjet.

Above all, said Welch, learn to sell outcomes for clients and “live and breathe return on investment”: the benefit that conveys inkjet’s value proposition most effectively. To sell ROI-producing outcomes, it’s necessary to get closer to what drives customers’ revenues and costs. Understanding their data is the key to making inkjet work for them, Welch said.

He also talked about lessons learned on the technical side. One is that printers investing in digital production technologies can never do too much research. Over the years, GI Solutions has sourced equipment from eight different vendors of variable printing systems. The company still works with five of them because, Welch explained, there is no “magic bullet” or panacea solution for production of this kind.

He recommended that printers find a way of “de-risking” the inkjet investment either by getting suppliers to cooperate or by outsourcing work until a base of sales has been built up. Benchmarking in depth with two or three vendors is the way to get to the bottom of operating costs, print quality, file handling, and other factors affecting performance.

He also advocated seeing the preferred device in action at a user site if possible, and never forgetting the crucial roles of workflow and finishing. “Marrying your application to the technology footprint is everything,” Welch said.

The latter precept is taken seriously at GI Solutions, where the 600-strong workforce includes 50 data analysts whose job is to turn customer data into targeted communications across multiple channels.

“Data, Create, and Communicate” is the mantra, and Welch said that by following this three-part strategy, the company has grown by 7% per year over the last four years. The direct mail business has grown by 15% over the last 12 months despite the fact that mail volume in Britain is declining by an estimated 4% to 5% annually.

An application that demonstrates how production inkjet supports the strategy is the “no sale” follow-up mechanism that GI Solutions has developed for its e-tailing clients. When an online shopper places goods in the check-out basket but then abandons the order before completing it, he or she gets a “triggered e-mail” within eight hours of the visit. If this causes the shopper to come back and complete the order, e-mail gets the credit.

But, triggered e-mails don’t always work. If there is still no sale within 48 hours of the e-mail outreach, a printed mailing piece, personalized with offers based on the shopper’s purchasing history, is dynamically prepared and sent.

The results, said Welch, have exceeded expectations: 14% more people completing their purchases, and an ROI to the e-tailer of $6 for every $1 spent on recovering orders from abandoned baskets.