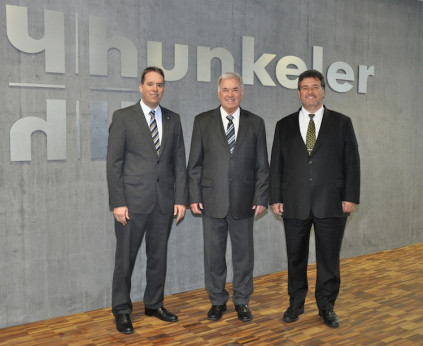 Franz Hunkeler (center) stands with his sons Stefan (right) and Michel (left) in front of the newly constructed extension for the Hunkeler Group's Production division. Together, the two brothers hold 100 percent of the share capital.

Stefan Hunkeler joined the company in 1999, and managed the Hunkeler Group as CEO and delegate of the board of directors until January 2016. Michel Hunkeler will now take over the operational management of the globally active company from his brother Stefan. As a minority shareholder, he will be able to make full use of his many years of experience as a member of the board of directors of Hunkeler and has been working for the company in operations since Aug. 1, 2015. Michel will be transferring overall responsibility for marketing and sales to Hans Gut (49), who has successfully managed the marketing division as a long-standing member of the executive board of Hunkeler to the present. Gut is also taking over the responsibility from Erich Hodel, director sales America/Asia Pacific, who is leaving on April 1, 2016, to Hunkeler's partner company Hunkeler Systeme AG. A smooth transfer is guaranteed thanks to Gut’s wealth of experience.

It is thanks to this exemplary succession planning that further foundations for the ongoing successful development of the SME are guaranteed in the long term. Ever since being established in 1922, Hunkeler AG has always been managed by members of the Hunkeler family. A far-sighted approach, as well as great intuition where market requirements and the innovative solutions derived from them are concerned, have made a significant contribution to the successful development of the globally active company.

All decisions will continue to be made and implemented in the interests of customers and business partners. One such big step into the future was already taken in 2015 with the extension to house a new production facility in Wikon, Switzerland. Maintaining its commercial independence has always been one of the cornerstones for the success of the family company. This is symbolized by the Hunkeler Innovationdays in Lucerne which has established the event as the international industry convention for high-performance digital printing.

RMX Network Announces Board of Directors For 2023