To remain competitive, these three commercial printers share how adding digital finishing into their workflows has helped them to finish printed products a lot faster, and with less waste and minimal makeready.

Allied Printing Services, in Manchester, Conn., first invested in digital finishing in 2001 with a Standard Horizon StitchLiner equipped with a four-tower collating system. It’s still being used today to collate book blocks, saddle-stitch books, and fold and trim in-line. According to John Sommers, president and CEO, the company added the finishing unit when it installed its first digital press - an HP Indigo 5000.

“We have been really successful with in-line finishing on our Canon ImagePRESS C10000VP digital color presses, so we handle bookletmaking, saddle stitching, folding and scoring in-line. That’s enabled us to streamline our operations and avoid a second near-line or off-line process,” explains Sommers.

“We were dedicating traditional finishing equipment to smaller projects where the setup took more time than the actual production run,” recalls Sommers. “That really was the impetus to push us into investing more in digital short-run finishing equipment.” 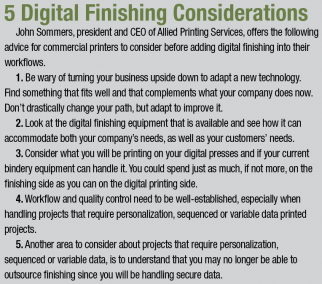 According to Sommers, digital finishing capabilities have helped Allied Printing Services to be more flexible and to adapt to the demands of the marketplace. It has also helped the company to be more competitive for shorter run and variable data digital projects. In addition, Allied has become proficient at managing and securing data.

“We’re doing a lot of read and print, where we are printing multiple components that have unique barcodes or alpha numeric codes. There are optical eyes on a lot of our finishing equipment. We’re reading those barcodes to validate that we’re getting our collations right. We are also using those barcodes to feed our inkjet systems and inkjet the correct, corresponding mailing address with the variable data that’s found in the booklet or in the envelope.”

Sommers adds that adopting digital and personalization capabilities makes it very difficult to outsource jobs. “Because we handle so much secure data, we can’t outsource any of that work - whether it’s printing, finishing or mailing.”

Moving forward, Sommers says that Allied Printing Services is looking at digital short-run diecutting, and potentially some in-line finishing equipment for its new rollfed Xeikon digital presses. “We are very diversified when it comes to our product mix, so we’re always keeping versatility in mind,” he adds.

“Traditionally, we had been a litho shop with 40˝ presses and a lot of the traditional folding, stitching, gluing, diecutting, and Wire-O binding equipment needed for that type of volume,” explains Bill Duerr, Hatteras president. “But as we started to get into more short-run, print-on-demand programs, we realized our commercial bindery equipment was inefficient.”

So Duerr and his staff started to look into digital finishing capabilities to support their digital presses. “We initially installed a smaller guillotine cutting system, and then acquired a Standard Horizon StitchLiner 5500.”

The company also added a VIVA inspection and tracking system to the StitchLiner. A Standard Horizon CRF-362 creaser/folder was also acquired for scoring and basic folding of digital products, and a Standard Horizon SmartSlitter was implemented to handle more variable-type cutting.

“We chose the finishing equipment from Standard Finishing Systems because we feel that their equipment and service are reliable. If a machine goes down, we know someone will be here to get it back on track right away,” Duerr explains. “The equipment has also provided a major cost benefit and has been a big time saver internally. ”

Duerr points out that one of the challenges of putting a digitally-printed piece on a commercial piece of finishing equipment was that the inkset for digital was not as secure as what could be achieved with offset inks, so there was more scuffing and ways to potentially compromise a printed piece.

Across the country, Impress Communications, in Chatsworth, Calif., purchased a Highcon Euclid III digital cutting and creasing machine in September from U.S. distributor Komori America, making it the first installation of the device on the West Coast.

“We chose the Highcon Euclid III because, together with Komori, it represented a partnership that we knew would be the most beneficial to us in the long run,” relays Paul Marino, Impress Communications’ executive director. 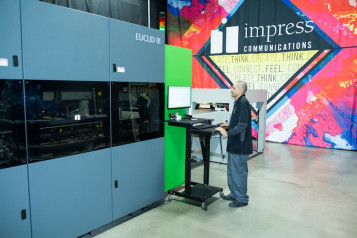 A specially trained Highcon operator finishes a job on Impress Communications’ Highcon Euclid III. According to Paul Marino, the company has devoted a lot of time into making its team of operators Highcon experts, and they’re a big part of the success of the machine.

Prior to adding the Highcon Euclid III, the limitations of steel rule dies meant that Impress would have to routinely alter a client’s creative vision or even turn down projects.

“With the Highcon, the power and flexibility of the laser diecutting array allows us to create whatever the customer can imagine - including intricately cut belly bands or wraps, personalized etchings of names on every piece of a promotional run, specialty seasonal puzzle pieces and pop-ups, and more.”

Marino offers the following advice to printers considering digital finishing equipment. “Don’t lose sight of a vision for what this equipment can enable your organization to become.”