As the president and CEO of McNaughton & Gunn, a book manufacturing company with its production facility in Saline, Mich., Julie McFarland has seen years of changes within book trends, the opportunities of new technology, and the value of a personal, customer-focused approach. She is an industry veteran, a respected leader, and a woman who has excelled in an industry segment that is largely male dominated. Her induction into the Printing Impressions/RIT Printing Industry Hall of Fame derives from a culmination of her efforts, and her commitment to running a business based on strong relationships. 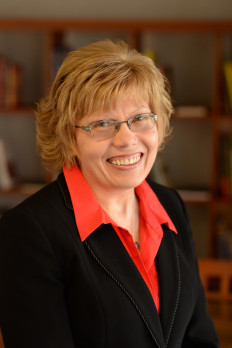 For McFarland, book manufacturing was the family business. The company was founded in 1975 by her father, Robert McNaughton, and several partners. McNaughton & Gunn was the second company her father — who died in 2019 — started. Today, the business operates three shifts and has a staff of 155 dedicated employees, who, on average, have worked for the company for more than 20 years. McNaughton & Gunn, she reports, handled some 6,000 jobs in the past year, with an average run length of 3,000 books printed offset, and between 50 and 100 books for digitally produced orders.

Julie McFarland, and all of her siblings, spent time working within the family business. She started in the estimating department, and worked in a variety of positions, which gave her a strong sense of the company. Upon completing her BBA at the University of Michigan (1982), and her MBA from Eastern Michigan University (1989), she spent time in accounting with Detroit Edison, an electrical utility company.

During her time there, McFarland says, she realized she greatly valued a workplace where the product was tactile and visible, the people more familiar, and a business based on relationships and friendships. So, she returned to McNaughton & Gunn in 1987, starting first in accounting, then moving into finance, and then operations. She has served as president and CEO since 2012.

McFarland’s love of books extends far beyond their manufacture — she is also an avid reader (of printed books, she adds). In her many years with the company, she believes she has developed a deep appreciation of all that goes into creating a book, from writing, editing, marketing, and production. Books, she notes, have such a strong impact on the world.

The Benefits of Being a Good Listener

McFarland says that one of the keys to her own professional development has been to become more comfortable talking to people. “It was difficult,” she admits, “because I’m an introvert, but I had to put that aside and move forward.” She also has benefited from becoming good at listening, clarifying what she has learned, and responding thoughtfully. McFarland stays connected to her industry segment by listening to team members and customers about recent developments. McFarland also takes time to learn what’s going on in the world, applying that to the company and its team.

To recharge, she prefers venturing outdoors, traveling, and exercising; adding that these activities give a good break and help improve focus. She also enjoys time with her husband, Dennis McFarland, and her son, Mike McFarland.

Regarding her presence as one of the few women at the helm of a book manufacturing business, she credits her father. “He didn’t put limitations on me based on what I should do,” she points out, “so it was not a factor when I started working with him.” 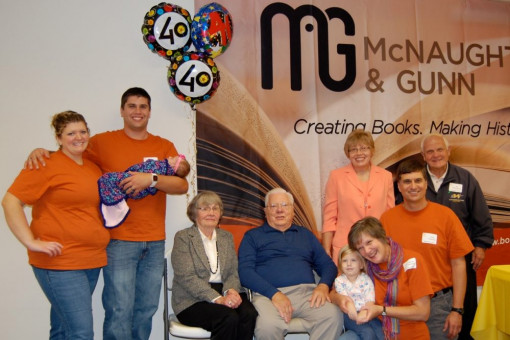 The McNaughton family is pictured together at McNaughton
& Gunn’s 40th corporate anniversary celebration.

Serving as a Mentor to Others

She has subsequently extended her mentorship to the employees of McNaughton & Gunn, and to the community. McFarland is currently involved in the “Summer Works” program at nearby Washtenaw Community College. The program works to mentor and engage students just entering college, and give them guidance on what leadership entails. She says the program is a great experience for both mentor and mentee. McFarland is also personally involved in a locally based program fostering literacy. “Without literacy,” she says, “it can be so hard to make the other pieces of life fit together.”

McNaughton & Gunn has grown its technological capability,
recently adding digital printing and digital finishing capabilities to its production facility. That said, McFarland says the company is rarely on the leading edge. “We let others do that,” she says, wryly.

In approaching any new technology, she and her team work to engage their industry supplier/manufacturer partners, carefully evaluating options to find the best solution possible. She also believes her finance background has added an important, rational touch to the company’s capital investment decision process.

Amid the company’s move into digital printing technology, and its ability to produce shorter runs for its customers, one of the challenges for McFarland and the McNaughton & Gunn team has been about maximizing workflow efficiencies. The company is using InSite, in addition to Prinergy, to integrate its digital processes and minimize touches.

McFarland says that while she expected more digital work to come from small publishers and even self-publishers, she was surprised that much of McNaughton & Gunn’s digital work — roughly 10% of the company’s total sales — has come from its existing accounts.

Asked whether there is a customer preference for offset printing, she notes that most publishers don’t care about the printing platform used, and that older concerns about the quality of digital printing no longer apply. As a further benefit of digital printing, she notes the company has handled divided print runs, where a short supply of books is produced digitally to satisfy the needs of, for instance, publicity or launch events, and a much longer offset-based run is done to fulfill the need for commercial distribution.

Regarding McNaughton & Gunn’s broader production approaches, McFarland indicates that recent consolidation in the book manufacturing segment has resulted in needed changes in production capacity and scheduling. These changes are not only for existing customers, but also for other publishers seeking producers with available capacity. She adds that while the preference among publishers for value-added services remains relatively unchanged, she is seeing a growing desire for faster-to-market approaches in book production. 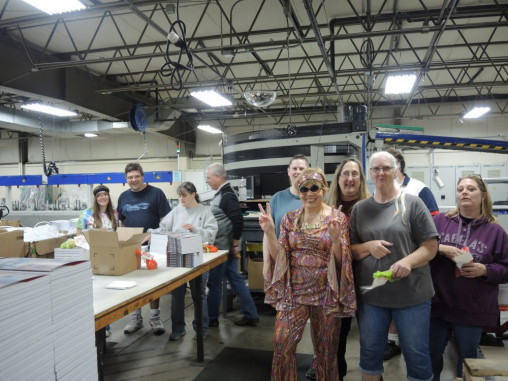 Becoming and Being a Leader

According to Jonnie Bryant, McNaughton & Gunn’s executive director of sales and marketing — who has worked with the company for more than 40 years — one of the traits that makes McFarland an effective leader is that she cares deeply about the company’s staff and its customers. Bryant said that it is not unusual to see Julie in the shop during third shift, adding the same interest and visibility at 3:30 am that she provides at mid-day.

In addition to being Bryant’s boss, McFarland has also been a valuable mentor. “Julie gave me a strong opportunity within the company when it wasn’t the most popular decision,” Bryant notes. “She showed great forethought and faith in me, and has been a strong supporter of me in my career.”

Bryant points to two specific ways McFarland has impressed her with her leadership. First, during the financial downturn of 2008, McFarland used her background in finance to keep McNaughton & Gunn open, even at a time when other book manufacturers were closing or being consolidated. “She made some very difficult decisions for the company,” Bryant recalls. During 2020, amid the COVID-19 pandemic, Bryant says that McFarland did everything she could to keep company staff safe, and even helped employees financially. “That kind of humanity,” Bryant says, “is something I’m very impressed with.”

Looking forward, McFarland believes one great challenge for both McNaughton & Gunn and the broader industry is to increase the diversity of the workforce. Further, she believes the industry needs to do a better job communicating what it is and what it can offer as a potential career path. “There are so many opportunities in our industry,” she says, “and we should convey them more effectively.”

Of McFarland’s induction into the Printing Industry Hall of Fame, Bryant speaks to McFarland’s key strengths: “Julie really puts everything into the company, and she’s here every day. I’ve watched her blossom over the years into a leader who cares about the company and the people,” Bryant points out. “Julie also cares deeply about the value of books, and she has been a great mentor to anyone wanting to get into the industry — especially women.”

Travis Mlakar, president of Millcraft, adds that McFarland has been an incredible advocate for her company, and that Millcraft has been lucky to include McNaughton & Gunn as a partner. “She has been a great advocate for the industry,” he says, “and the industry is better for her presence.”

As for McFarland’s reaction to being named to the 2021 Printing Impressions/RIT Printing Hall of Fame, her words were few, but emotionally tinged, and deeply meaningful. “It’s a big honor,” she declares, “and I’m very proud to follow in my father’s footsteps.” Those people who follow in Julie McFarland’s footsteps, be they employees, customers, vendors, or those she has helped mentor, surely value her leadership, friendship, and humanity.