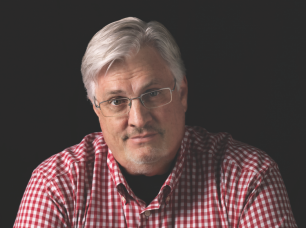 Do you know what the pinnacle of passion sounds like? If not, then you haven’t met Bob Tursack. To speak with him about the art and craft he loves is to be treated to boundless enthusiasm in its purest form.

In an industry being crushed by commoditization, Exton, Pa.-based Brilliant Graphics (recently rebranded as Brilliant), of which Bob Tursack is CEO, thrives on a commitment to craft that printers rarely have the luxury of anymore. Yet it is this exacting craftsmanship on which the company is built.

Bob Tursack is not just a printer. He is also a photographer, and his fine art background infuses everything he does. From the loveliest foil applications, to the most complex laser cutting, to color fidelity that is second to none, Brilliant prides itself on attaining “stunning results” for the most discerning clients.

This isn’t hyperbole. Just ask Bette Rothstein, creative director for the famed auction house Swann Auction Galleries in New York. She tells the story of how she first came to work with Tursack:

“I had been working for Swann Galleries for only three months and recommended sourcing a new printer,” she recalls. “Synchronicity stepped in when Nicholas (Nicho) Lowry, Swann president, was having a conversation with two people he knew from the business at another auction. ‘I love this printer I work with,’ one said. ‘I love this printer I work with also,’ the other said. As it turned out, they were both talking about Bob.”

Once Rothstein worked with Tursack, she understood. Over her 19 years with Swann Galleries, and during her career she has worked with a great many printers, but “hands down, he’s the best,” she says.

Rothstein describes a man who always has her back. If she has a problem, even at 3 a.m., he’s on the phone right away.

When asked to describe working with him, Rothstein stops and thinks for a moment. “His printing knowledge is extensive. He is incredibly organized and has a strong work ethic. His company is meticulously managed. He is always on time, always on schedule and on it. If I have any problems whatsoever, Bob is there for me. Plus, he’s just one of the most quality human beings I’ve ever known. Is that enough?”

Tursack’s attention to detail extends from the top to the bottom of his business - literally. His clients even comment how his pressroom is the cleanest they’ve ever seen. Wendy Paton, a fine art photographer who has known Tursack for more than a decade, is among them. “You could eat off the floor, even in the production areas!” she says.

Bob Tursack was born into the printing industry and began working at his father’s printing company, Tursack Printing, between fifth and sixth grades. As a youngster, he learned the ins and outs of every department. When he was 22, Tursack bought the business from his father, then grew it from $3 million to $60 million.

But something was missing - the joy of working with the kind of artists he’d grown up with. When he was a child, his father, Bob Tursack Sr., purchased him a used 35mm Exakta camera and lenses and built him a darkroom.

A Life-Long Passion for Photography

From that point on, Tursack was hooked. “I started taking lessons from local artists - anyone who would take a kid seriously,” he recalls. “Today, I develop film. I collect photography. I go to shows. I love everything about photography, from the science and technique to the creative process.” 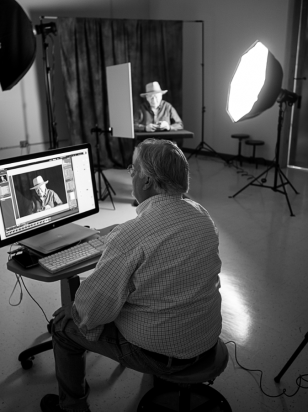 A favorite pastime of Tursack is to make portraits of people who he finds to be particularly interesting.

Tursack’s passion ultimately became the impetus for one of the greatest changes in his life. In 1998, he sold Tursack Printing to Consolidated Graphics and started Brilliant. He wanted to focus on the types of clients he loved most - photographers, painters and luxury brand accounts.

Initially, Brilliant was aimed at producing exhibition prints. But his clients wouldn’t let him stop at that. “It quickly turned into ‘Can you do some show invitations?’ or ‘Can you print this book?’” At first, Tursack brokered much of that work, but felt he lacked control. “So, we got back into a full-fledged print operation, but we remain focused on the kinds of clients we want to serve,” he explains.

Most recently, Brilliant started a full fabrication department that includes not only foil stamping, complex diecutting and Scodix dimensional coating, but also CNC machines and 3D printers. “We get to make things here!” Tursack effuses.

“We make cases for books. Inserts for clamshell boxes. Things that are natural extensions of what our clients need. A rule of thumb is, if we are buying something from the outside, we look to bring it inside so we can have full quality and process control.”

This even extends to screening. To get the extraordinary print quality Tursack expects, Brilliant established processes that would support 400-line hybrid screening that, when used in combination with the highest quality papers, produces results no other printer can replicate. “To find Bob’s competition, you have to go to Italy,” says Rothstein. 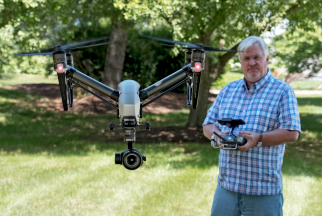 Brilliant has even started an aerial photography service. It supplies an FAA-certified pilot and drones with either Hasselblad or Zenmuse equipment. Bob Tursack blends his love of aviation and photography to help the business grow.

Paton, who specializes in analog, gelatin silver photography, has worked with Brilliant for more than a decade. The books, exhibition prints and marketing collateral they have created together match the unrelenting perfectionism in her own work. “The quality is remarkable,” she says. “Everything is done to perfection.”

Recently, Paton decided to trust Tursack and his team with bringing to life her long-held vision of an accordion-folded book. The project, which has a finished size of 4.9375x7.0625˝, was painstakingly printed and hand-assembled. It, in itself, is a work of art. As part of a limited edition of 300, each copy is signed and numbered.

Understands Role of Design and Marketing

Another thing that makes Tursack remarkable is that it’s not enough to print something that looks extraordinary on the shelf or hanging on the wall. It has to get results. “He appreciates design and marketing, while a lot of people in the creative industry don’t,” says Rothstein.

In fact, Rothstein was recently blown away by a project Tursack designed as a surprise for her. He took two dozen of the gallery’s catalog covers and designed them into a framed poster that now hangs in her office. “He brings more than printing,” she says. “He is the Relais & Chateau of printers. No other printer would do something like this.”

As much as Tursack is a craftsman, he is a father and grandfather, too. His oldest son, Dustin, 34, is the fourth generation Tursack in the printing industry and serves as VP of marketing at Brilliant. His other son, Hans, 31, has his master’s in architecture from Princeton and now works at MIT. In 2004, he adopted a daughter, Lourdia, from Haiti. Now 32, she is a nurse. He also has three grandchildren.

Although Brilliant has won many awards, some of his favorite projects are for individual photographers whom he admires. Most recently, he finished a retrospective for Sally Mann, whom Tursack describes as “a living legend.” The retrospective was released in May at the National Gallery in Washington, DC.

“When we found out we were getting her book, we celebrated,” Tursack says. He describes himself and his director of imaging services, Peter Philbin, as “possessed,” putting in hundreds of hours to get the images perfect. “It was a real labor of love,” he admits.

Another favorite is anything for Andrew Wyeth. One of the last proofs he worked on with Wyeth hangs in the Brilliant lobby.

Other photographers he has had the pleasure of working with include Steve McCurry (photographer of the famous “Afghan Girl”) and George Tice. “I sought out George Tice for years. I finally got an audience with him,” Tursack recalls. “I said, ‘All I want is to do a press proof for you. If you like it, let me do your next book. If not, you’ll never hear from me again.’” Brilliant is now working on the third project with Tice - “Life Work,” a retrospective of Tice’s career.

Tursack effuses his gratitude for galleries like Swann, which give him access to the top artists and photographers in the world. “Name a photographer - name an image - we have touched it and held it in our hands,” he says. “There is no way I’d get to meet these people and work with them in any other industry. It’s an absolute dream for me.”

Tursack enjoys the challenge of doing the impossible. He recalls a book Brilliant produced for the New York School for the Visual Arts (SVA) that had just one section gilded with gold. “It wasn’t the entire book - just a section,” he recalls. “Every bindery turned it down. We figured out a way to do it, and it turned SVA into an amazing and ongoing account.”

Now when people say, “Wait a minute! You can’t do that!” Tursack gets to respond, “What do you mean we can’t? We just did!”

After all these years, Tursack remains captivated by the glorious magic of translating world-class art and photography to the printed page, and he cannot understand the lack of enthusiasm and passion among other printers for what they do.

“Enthusiasm is our greatest competitive advantage,” he concludes. “I don’t understand when printers commiserate about how the industry is shrinking and print is dying. We will not succumb to a defeatist outlook. But, then again, maybe the best thing I can have is for my competition to believe that.”

Getting the Expected Accepted