In the year 1919, Emmett Greenwell, the circulation manager for local Kentucky newspaper the Owensboro Messenger, and Paul Chisholm, the typesetter for the same newspaper, saw an opportunity. Prohibition was beginning to take hold, so the two started their printing business — Greenwell Chisholm Printing — in a former saloon.

They operated out of that location until 1957, when the business simply outstripped the space. The new building was 5,700 sq. ft., and by that time, their siblings and children were also getting involved. By the early ’70s, the grandchildren began to join as well.

In 1994, the fourth generation had come into the business, and the company once more needed more space, this time purchasing an empty plot of land and building a 10,000-sq.-ft. space in Owensboro, Ky., where they still operate today. That said, in the 15 years since they last moved, the company hasn’t stopped growing; talks are now in the works to expand again, this time adding an additional building to the property to allow further diversification.

Greenwell Chisholm today exemplifies the concept of convergence — a commercial printer that has grown to encompass far more than traditional commercial print jobs. When the company was first founded, the owners relied on handset linotype equipment. They later acquired a two-color offset press, and through the years expanded first to four-color, and then to six-color, lithography. Along the way they added a range of digital equipment, allowing them to expand into variable data and short-run work, and in the past few years, wide-format printing has become a rapidly growing segment.

In addition, the shop has accumulated an impressive finishing department, including folders, stitchers, binders and cutters to ensure there is rarely a job it can’t finish in-house. The mailing department allows Greenwell Chisholm to offer an ever-expanding range of full-service marketing opportunities. And the shop even added the equipment necessary to create a wide range of promotional products, allowing it to print logos, artwork and branding on anything a customer might want beyond paper.

“We do it all,” Brian Greenwell, VP and the fourth generation to join the business, points out. “Even during the trying times, such as 2008, which was extremely hard on us like every other printer, our diversity served us well — all segments are rarely impacted at the same time. We have a broadly diversified customer base, which has also served us well over the years.”

Employee Base Is Secret to Firm’s Success

Building a truly diverse printing business that can withstand the test of time isn’t done on equipment alone, however. Brian Greenwell believes the company would not have been nearly as successful as it is without the right team in place.

“We are actively trying to cultivate new talent all the time,” he says. “I believe that strategy will continue to serve us well into the next few decades. Printing as a skill or trade isn’t being taught in as many places anymore, so that has become our responsibility. Training our people is a top priority, and that sets the stage for growth.”

Carl Greenwell, the current owner of the business, notes that the 36 employees who work at the company remain very close. “We’ve got people that really care not just about the printing, but about each other,” he says. “They come in on their off days to help each other out when someone is sick or can’t make it in. I find that rare in this day and age, and I thank them for it. That’s the type of culture we try to promote.” 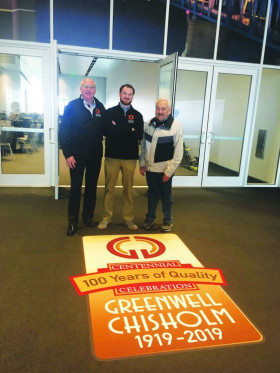 From the left, Carl, Brian and Tommy Greenwell stand behind signage that pays tribute to the 100th anniversary.

The average tenure at Greenwell Chisholm is 20-plus years, so the shop created a succession program that aims to ensure that the rich depth of knowledge isn’t lost as individuals begin to think about retiring. Older employees are encouraged to concentrate on training and cross-training the younger generations, with a transfer of knowledge that begins as much as five years before retirement is even on the horizon. This ensures there is plenty of time to pass along the art of printing, not just the technical skills.

As a testament to how well this strategy works for Greenwell Chisholm, Carl Greenwell even notes there are several already-retired employees who still come in to work the equipment when a need arises, such as a vacation or during a rush when extra hands might be required. “They still like coming in and being part of the team,” he notes. “I don’t know how long that will last, but I will certainly continue to play that song as long as it’s on the radio!”

The shop also takes pride in offering “a little bit of everything,” says Brian Greenwell. Even the smallest jobs, such as business cards, aren’t turned away, as Greenwell Chisholm views them as an inroad into a potential new customer.

“Items like business cards or letterhead aren’t moneymakers, necessarily,” he adds. “But those jobs are often a gateway into more business. In fact, one of our current largest customers started out with business cards. They were working with a company that couldn’t do them, so they came to us. We did that for six to eight months before they started to move the rest of the work over. We hesitate to turn down any job because you never know where it will lead.”

To ensure the shop is prepared for whatever might walk through the door, staying on top of the latest technology is something Brian Greenwell notes is another key element to the company’s success. Rather than be satisfied with the services and applications offered today, he is always on the lookout for what the next innovation might be.

One area, in particular, that Brian Greenwell is following right now is the packaging and labeling segment. “I’m not saying we’re going into it right now, but it has piqued my interest, and I’m watching it closely,” he reveals. The ability to do short-run labels and packaging for small, boutique brands is something Greenwell sees as a potential avenue for growth in the coming years.

Greenwell Chisholm is also looking at expanding its current fulfillment services. Right now, limited on-demand fulfillment in available, but it requires operating out of a space the company rents several blocks away. The future building expansion is, in part, going to be targeted at bringing that service completely in-house. That would then allow the shop to offer greater storage and fulfillment services to customers looking to take advantage of bulk printing discounts, but who don’t have the space to store the inventory themselves.

“We try to be a solutions provider to our customers,” says Brian Greenwell. “We sell ourselves as a one-stop shop where — once it is off the customer’s desk and on ours — they don’t have to worry about it again. They used to have different providers to do everything, from the graphics to the print to the mailing, and it was cumbersome. There is no finger-pointing now — it’s either on time or it’s not and if it’s not, then it’s our fault.”

For the past 100 years, Greenwell Chisholm has grown from a small linotype operation founded by two former newspapermen, to the service provider of today. The shop has stood the test of time as technology has evolved and changed, staying nimble and flexible, and always ready to embrace change to remain relevant and engaging. The company embraced and embodied the spirit of convergence long before the term became a buzzword for the industry — and it will continue to do so for many years to come.

What Does COVID Mean for PRINTING United Expo?